I can count on zero fingers the number of times I've been interested in a new Christmas album. I'm a fan of relistening to the old-timey classics and haphazardly discovering strange additions to the genre. But I'm enough of a Cheap Trick geek that news of the power-pop legends releasing a Christmas collection this year piqued my curiosity, and, happily, it's a winner. All the aspects of the band that made me a fan — the Beatles-obsessed harmonies, guitarist Rick Nielsen's knack for ear-candy riffs, Robin Zander's killer vocals — are here on a set that includes three originals (opener "Merry Christmas Darlings" is strong) as well as energetic covers of unexpected classics like Chuck Berry's "Run Rudolph Run" and the Ramones' "Merry Christmas (I Don't Want to Fight Tonight)." (DAN NAILEN)

Who would have ever thought that an animated TV special would produce one of the most effortlessly cool holiday albums of all time? Originally airing on CBS in 1965, A Charlie Brown Christmas is a minor-key miracle, a funny and insightful plea for yuletide kindness that's aided by a wonderful jazz score by pianist Vince Guaraldi. The accompanying soundtrack album is actually longer than the 25-minute special itself, released concurrently with the show and featuring Jerry Granelli on drums and Fred Marshall on double bass. Everyone knows tracks like "Linus and Lucy" (the unofficial Peanuts theme song) and the children's choir-backed "Christmas Time Is Here," but the album also includes Guaraldi's terrific interpretations of standards like "Greensleeves" and "O Tannenbaum." I've got this one in frequent rotation every December, and no one ever seems to say a bad word about it. (NATHAN WEINBENDER)

Not everyone is an acolyte of the so-called "Prince of Puke," I get that. But even if John Waters' films (Pink Flamingos, Serial Mom) are beyond the pale for your delicate sensibilities, most people will find something to love in his personally curated compilation of oddball Christmas tunes. Some of them might already be familiar — Tiny Tim's take on "Rudolph the Red-Nosed Reindeer" and the Chipmunks' "Sleigh Ride" in particular — but the new revelations are the best, like Paul "Fat Daddy" Johnson's album-opening "Fat Daddy" (in this case, he's referring to Santa instead of himself), and the decidedly non-child-friendly "Here Comes Fatty Claus" by Rudolph and the Gang, perhaps the most bitter Christmas song ever recorded. If you're sick of the "classics" and love some bad taste with your eggnog, seek out this album. (DN)

All the cool kids in the '80s and '90s were in the know about this Christmas compilation series, so it might be due for a popular comeback. Immediately recognizable by their distinctive Keith Haring cover illustrations, the collection started in 1987 as a benefit for the Special Olympics, and the first album featured holiday standards performed by some of the biggest names of the era — Bruce Springsteen, Whitney Houston, U2, Madonna. The ongoing series has also featured original tunes that have since become classics, including Tom Petty's "Christmas All Over Again," Run-D.M.C.'s "Christmas in Hollis" and the Smashing Pumpkins' "Christmastime." New Very Special Christmas albums were being released as recently as 2012, enticing a new generation of pop fans with the likes of Michael Buble, OneRepublic, Jordin Sparks and Christina Aguilera. While the franchise hasn't spawned any future holiday favorites, there's still time for it to happen again. (NW)

IT'S A WONDERFUL LIFE EP 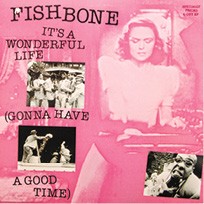 One of the best live bands to come out of Los Angeles in the '80s, Fishbone always struggles to capture its punk/funk/soul fury on recordings, but this gloriously unhinged holiday-themed EP from 1987 comes close. The four songs come in at under 16 minutes total, including the wicked ska fun of "It's a Wonderful Life (We're Gonna Have a Good Time)" and the boozy, sparse balladry of "Slick Nick, You Devil," which illustrates a less-than-ideal Christmas story. (Hint: Santa's drunk and stealing the stereo.) "Just Call Me Scrooge" brings serious funk to the proceedings, while "Iration" goes all reggae for some loping groove-heavy horn-play. (DN)

The title alone should automatically perk up your ears, because Motown makes everything better. This compilation was originally released as a double LP set in 1973, a convenient repackaging of two dozen of the legendary record label's Christmas singles from the '60s and '70s, and it still sounds as fresh and vibrant as it must have 45 years ago. Some of its tracks have justifiably become holiday favorites, including the Jackson 5's buoyant "Santa Claus Is Coming to Town," Stevie Wonder's "What Christmas Means to Me" and Marvin Gaye's "I Want to Be Home for Christmas." Other slightly more obscure tracks, like the Temptations' take on "Rudolph" and "Jingle Bells" by way of Smokey Robinson, probably should be radio staples. (NW)

As Louisville's My Morning Jacket has evolved from rootsy Southern rockers tearing up nightclubs to sprawling psychedelic-tinged arena rockers over the course of their career, singer Jim James has remained simply one of the best vocalists around. Add the band's talent for experimentation and you have the makings of some great Christmas tunes — really! This EP from 2000 combines originals and winning covers (like Nick Cave's "New Morning") and serves as a vivid reminder of the band's exciting explosion into the public's consciousness, full of electric guitars and soaring harmonies. Pair it with the band's Christmas-filled 2011 iTunes Session EP, a largely acoustic, sparser approach to classics like "I'll Be Home for Christmas" and "Have Yourself a Merry Little Christmas," for nearly an hour of yuletide excellence. (DN)

SONGS FOR CHRISTMAS and SILVER & GOLD

Back when he was on a mission to produce a concept album for each of the 50 states (he'd eventually throw in the towel after 2003's Michigan and 2005's Illinois), singer-songwriter Sufjan Stevens was cranking out annual Christmas EPs in limited quantities for his friends. He continued making those yuletide collections as his career took off, and they've been made available in these two compilations. Stevens digs up old hymns, traditional carols and secular tunes and puts them alongside originals, including the elegiac "Sister Winter," the cheeky breakup tune "Did I Make You Cry on Christmas? (Well, You Deserved It!)" and the loud-quiet-loud celebration of "Hey Guys! It's Christmas Time!" Stevens' compositions don't exactly reinvent the wheel, but his gentle, haunting style makes for the perfect soundtrack to a quiet, snowy Christmas morning. (NW) ♦

The original print version of this article was headlined "Rock Humbug"

Christmas Playlist: Staff members choose songs that mean something, anything