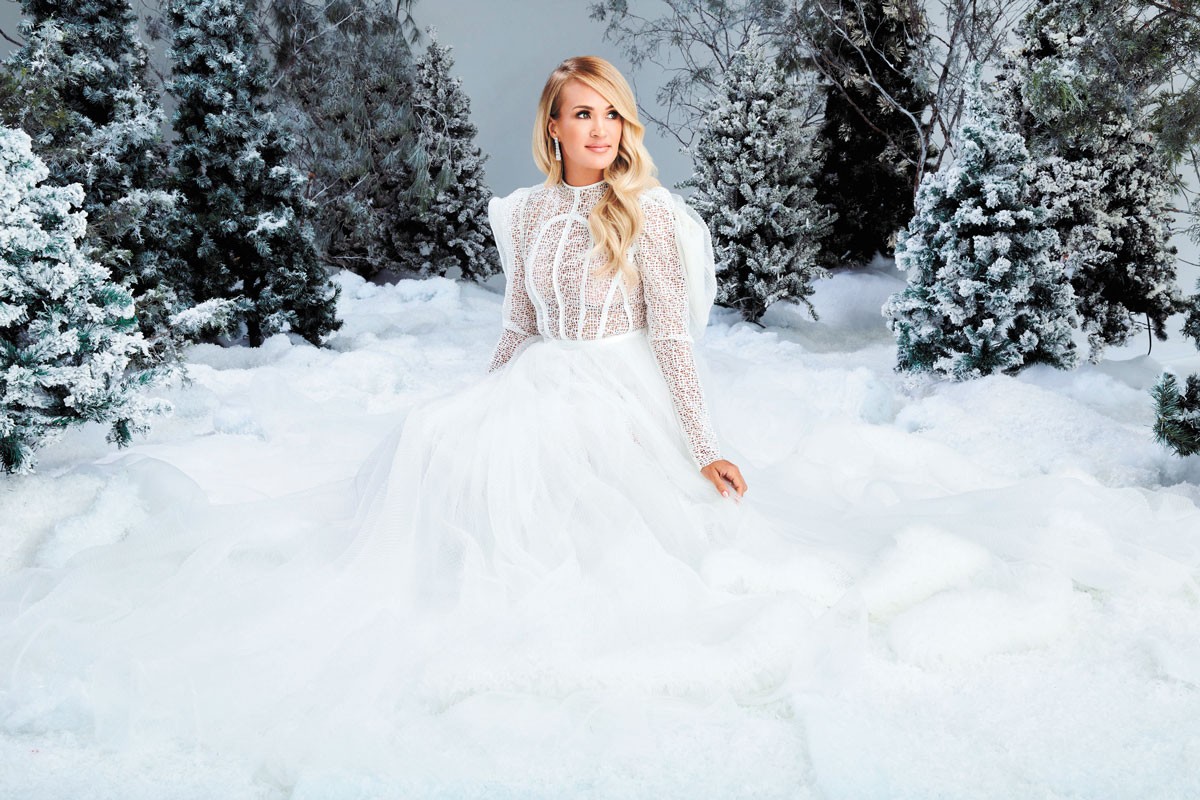 Carrie Underwood embraces some gospel on her holiday album.

Christmas is all about tradition, and one of ours involves tearing the wrapping paper off the year's batch of holiday albums and assigning them a totally arbitrary grade on a wildly inconsistent scale.

Art released in 2020 will always have an asterisk next to it, but one thing that hasn't slowed is the glut of high-profile, holiday-friendly album releases from household names. This year we've got yuletide-friendly material from a couple divas, a '90s rock band, a Broadway star and more.

Dolly Parton is perhaps positioning herself as the new ambassador for the yuletide season, what with the simultaneous release of her Netflix film, Christmas on the Square, and this warm and fuzzy collection of well-worn favorites and original compositions. Everyone loves Dolly, and so the high-profile stars come running to appear on the album — from her brother Randy and her goddaughter Miley Cyrus (Billy Ray's in there, too), to Michael Buble, Willie Nelson and, uh, Jimmy Fallon. This likely won't make it into my regular Dolly rotation, but she brings an angelic glow to everything she touches, and what more could you want right now?


Our grade: Three coats of many colors

The country superstar's first Christmas album is the least secular of the bunch I listened to, with hymns like "Joyful, Joyful, We Adore Thee" and "O Come, All Ye Faithful" and newer standards like "Mary, Did You Know?" The record is at its best when it leans into its gospel-inflected influences, and highlights include the soulful original "Let There Be Peace" and the John Legend duet "Hallelujah." Underwood's voice is undeniable, of course, but the whole thing is a bit staid for my tastes.

Megan Trainor, she of "All About That Bass" fame, already released a proper album in 2020, and now she closes the year with this upbeat, shopping mall-friendly Christmas collection. She applies the slick R&B-adjacent production that made her a Top 40 star to the likes of Wham's "Last Christmas" and the Seth MacFarlane duet "White Christmas," as well as seven new songs that feature assists from various members of her family and funk legends Earth, Wind and Fire. The covers are mostly unremarkable, but some of the original songs are surprisingly fun.


Our grade: Two and a half inflatable candy canes

It's Christmas All Over, Goo Goo Dolls

Yes, those Goo Goo Dolls, the guys behind soaring '90s power ballads like "Iris," who go a jazzier, brass-tinged route on this yuletide LP. Recorded in quarantine after the band's most recent tour was scrapped, it gets its title from the Tom Petty classic, featured here alongside a weird collection of covers, including "Hark! The Herald Angels Sing" and the Chipmunks novelty hit "Christmas Don't Be Late." The Johnny Rzeznik-penned compositions are just OK.


Our grade: Two used copies of the City of Angels soundtrack

There's nothing new on this compilation from the seemingly never-ending Now That's What I Call... series, but it's stacked with all-time great artists from multiple generations — Whitney Houston, Boyz II Men, Luther Vandross, the Supremes, the Temptations and more. My favorites are the vintage tracks, especially Stevie Wonder's "Someday at Christmas," James Brown's "Please Come Home for Christmas," Otis Redding's "Merry Christmas Baby" and Marvin Gaye's "I Want to Come Home for Christmas." Of all the albums on this list, this is the one I'll be spinning most.

From its retro-looking album cover to its no-nonsense title, Hamilton star Leslie Odom Jr. is clearly going for a back-to-basics vibe here. And yet the sound is much more contemporary than you might expect: "Winter Song," featuring Oscar nominee Cynthia Erivo, has a shuffling R&B beat, and album closer "Heaven & Earth" has the soulful sheen of a John Legend ballad. Oh, and turns out Odom's a great vocalist — what a surprise.

It's tough to capture the Christmas spirit without words, but percussionist Warren Wolf's newest album does just that. It's in the same vein as one of the best-ever holiday albums, Vince Guaraldi's score from A Charlie Brown Christmas, and even features a few of the same tracks ("Christmas Time Is Here," "Skating"), alongside jazzy, instrumental interpretations of John Lennon's "Happy Xmas (War Is Over)" and "You're a Mean One, Mr. Grinch." This would make the ideal soundtrack for opening gifts on Christmas morning.


Our grade: Three and a half tinsel-covered vibraphones ♦

The original print version of this article was headlined "Yuletide Tracks"