The final Dragon Tattoo film is good, despite losing sight of its Girl. 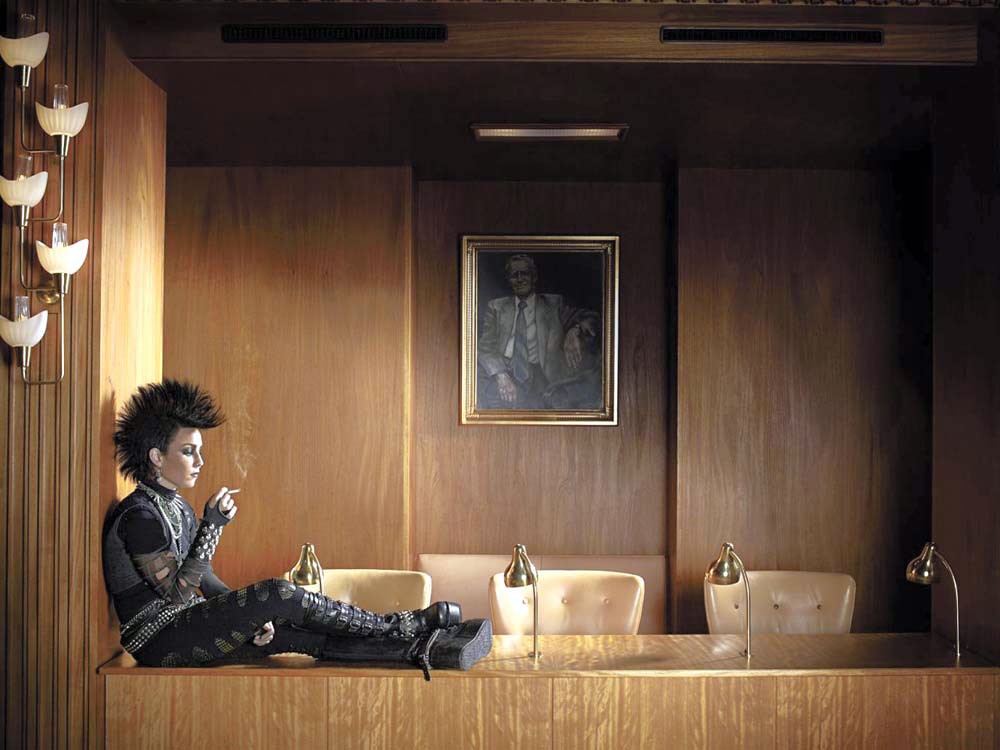 Boardroom punk (he's the one on the wall)

The movies had never quite seen a character like Lisbeth Salander before, and so her first appearance in The Girl With the Dragon Tattoo was a startling, welcome wonder. Tough, smart, and competent, yet also wounded and searching for friendship, Salander was fully rounded, fully human. She was a conundrum and a mess, yet still sympathetic — as film so frequently and unremarkably allows male characters to be.

As portrayed by the electric Noomi Rapace, Salander more than stakes out her ground as a character who demands to be taken seriously and treated as a person worthy of, you know, personhood.

Salander remains the riveting centerpiece of this third film in the series, but, alas, her continuing story has been winnowed down in a way that makes it — and her — feel smaller than before. Hornets’ Nest was originally destined for Swedish television (as was the previous film, The Girl Who Played With Fire), and it feels like it. As a TV miniseries goes, it’s pretty darn good (and perfectly suited for DVD, too). As a theatrical film, however, it feels lackluster, minor and ploddingly episodic.

Dragon Tattoo had something all-encompassing r to say about the state of the world and how it treats women in general. This third film, however — like the second — focuses too narrowly on the details of Salander’s life. It feels as if novelist Stieg Larsson’s vision is getting constricted.

Hornets’ Nest picks up where Fire left off, with Salander and journalist Mikael Blomkvist (Michael Nyqvist) working separately to clear her name after she is accused of having murdered one of Blomkvist’s co-workers and her own social-welfare guardian. This happened almost immediately after an absolutely ridiculous comic-booky event that threatened to derail the whole story. Hornets’ Nest tapers the tale down even further, winding up in an extended courtroom battle that — no spoilers — makes Salander’s involvement in the first film feel like a preposterous fluke of fate, and everything we’ve seen in the latter two films feel like a paranoid conspiracy fantasy. It’s almost unforgivable.

Almost. Salander’s outrageous rage — and the cold calculation with which Rapace portrays her — is still a marvel to behold. I wish the finale of her story were more worthy of her.