Despite a nation in the thrall of the Tea Party, the Inland Northwest won’t turn out many votes for the right-wing movement. 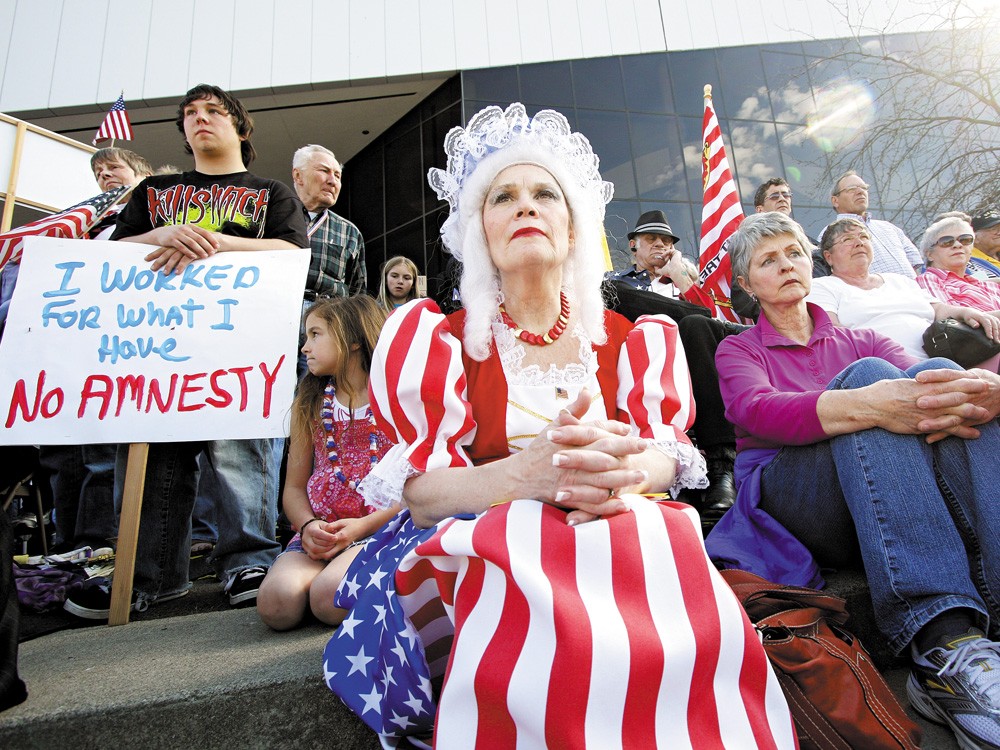 It was tax day. The sun was out, and local Tea Party members — hundreds and hundreds of them — gathered on the cement banks of the Spokane River across from the clock tower.
And they didn’t throw a damn thing in.

What a wasted opportunity. It should have been a day of reckoning: April 15, the day Uncle Sam sends out his minions to fill his coffers, and here were the small-government fanatics raging against socialism, tyranny and “taxation without representation.” Just 23 days after President Barack Obama signed health care reform into law, masses of self-proclaimed patriots waving their golden “DON’T TREAD ON ME” flags came to show solidarity against what they saw as an out-of-control government.

Historical parallels with the original Tea Party, of Boston fame, were thick — and largely contrived. So it’s surprising no one thought to bring a chest filled with tea leaves to dump into the river.

It’s not the first missed opportunity for local Tea Partiers. In an election cycle defined nationally as the year of the Tea Party, not one grassroots, fire-in-the-belly Tea Party candidate made it through a contested primary in the Spokane area.

“They don’t seem to be as much as a factor here in Washington,” says Washington’s Republican Secretary of State Sam Reed, who oversees elections. “The fact that [U.S. Senate candidate Clint] Didier got 12 percent — and he was the Tea Party guy — says something.”

Didier’s relatively poor showing did shock the Tea Party community. He came in behind Democratic Sen. Patty Murray, who got 46 percent of the vote, and Republican Dino Rossi, who gathered 33 percent of the vote after publicly spurning the Tea Party. After the primary, Rossi rejected Didier’s calls to shift to the right on abortion and taxes. Didier still has not endorsed Rossi.

But beyond Didier, candidates supported by the local Tea Party barely dented the August primary vote totals. There was Spokane City Councilman Bob Apple, one of the few Democrats to receive the group’s blessing. He came in third place in his race for the state House, behind a Republican who said he’d legalize pot and tax it at a 50 percent rate.

And there was Randall Yearout, who ran against U.S. Rep. Cathy McMorris Rodgers, a Republican. Yearout came in second to last, barely ahead of David Fox, who dropped out of the prosecutor’s race in Clallam County and made a last-minute filing in Eastern Washington’s congressional race. Fox gained infamy almost instantly on this side of the state for his many peculiarities, among them soliciting sex from a stranger.

Kirk Smith, a former spokesman for the Tea Party of Spokane who still acts as a political adviser to the group’s leaders, says the group takes a longer view of things.

“We never pushed a Tea Party candidate here,” he says. “That’s secondary to having good, conscientious people out there making good decisions and sticking to them. … The real proof in the pudding will be after the election, holding them accountable. Some will fall off the apple cart, some will hold true to their beliefs.”

In an irony likely not appreciated by today’s Tea Partiers, there was another modern group who shared their moniker. It was a liberal political group in the age of Nixon, and their TEA stood for Tax Equity for Americans.

That group, according to an article in the New Yorker, “urged organizers to use the slogan ‘Don’t Tread on Me,’ and suggested ‘How about forums on Tax Day, or on the anniversary of the Boston Tea Party — in front of IRS or H. & R. Block?’”

But this historical parallel doesn’t interest today’s Tea Party. They’re more concerned with equating the health care legislation of 2010, passed by the democratically elected U.S. Congress, with the Stamp Act of 1765, passed by King George’s Parliament, which led to the Boston Tea Party.

Tea Partiers across the country gladly take up the Founding Fathers’ mantle, declaring they are the true descendants of those founders, while liberals and progressives are the true enemies of the people.

But since the Tea Party is not a true political party, but something more of a movement, nailing down its core beliefs is a bit tricky.

Generally, members advocate for smaller government, reduced taxes and strict adherence to the U.S. Constitution. They use words like “liberty” and “freedom” to argue for what have traditionally been Republican philosophies.

But for Democrats and progressives, the Tea Party is just an angry and ignorant fringe of the GOP, both of which, they say, are under control of the Fox News empire.

For the left, it’s as if the Tea Partiers are suffering from intense amnesia by willfully ignoring the ballooning budget and national-security apparatus that flourished under George W. Bush.

That, or they’re rejecting the entire American political system by forgetting that Obama’s Democratic Party had run on reforming health care insurance during the election of 2008 and won handily, by a margin large enough to push the legislation through with almost no Republican support.

As Obama so artfully put it in a meeting four days into his administration, “I won.”

Now, two years later, the Tea Party had hoped to get Obama to eat his words and erase recent history.


According to an analysis published by the New York Times last week, this November’s election could give the Tea Party some influence over the nation’s trajectory.

With candidates looking favorable in 33 House races and eight Senate races, the Tea Party “could exert outsize influence, putting pressure on Republican leaders to carry out promises to significantly cut spending and taxes, to repeal health care legislation and financial regulations passed this year, and to phase out Social Security and Medicare in favor of personal savings accounts,” the article says.

None of these candidates will come from Washington. According to the Times, the only two Tea Party candidates in Washington come from the west side of the state. They’re James Watkins and John Koster, both of whom are congressional candidates in Democratic-leaning districts. (Raul Labrador in Idaho also has the support of the Tea Party and is running against incumbent Walt Minnick, a very conservative and popular Democrat.)

“We had a candidate over here in the 3rd, an open seat, who worked his tail off,” Secretary of State Reed says, referring to David Castillo. “But I think he made a mistake. He hooked up with Tea Party, ended up coming in fourth. And he campaigned the hardest, was well known, was a great candidate.”

The Tea Party hasn’t done well because Washingtonians are “used to having a more direct expression. We have the initiative process, we have the top-two primary. We’re not Delaware, where you just have one shot behind closed doors,” Reed says, referring to the oft-mocked Republican (and Tea Party darling) candidate for Senate, Christine O’Donnell.

In traditional primaries based on party preference, whichever candidate hews closest to the party line usually wins. In Washington, Reed continues, people aren’t restricted to one party, allowing them to vote for more moderate candidates. The radical base may not be rallied, but the two candidates who make it to the general election are less extremist.

Reed says that while he doesn’t downplay the anxieties and frustrations voters feel across the nation, it’s not the first time elected officials have earned voters’ mistrust.

“We’ve seen politically extreme groups before,” he says. “The Republican Party had the John Birch Society and religious-conservative groups. We saw the Ross Perot phenomenon in 1992. … The Democrats have had their kind of peaceniks, their more extreme environmentalists.”

These splinters are byproducts of the two-party system, he says, where a group believes the parties aren’t pure enough for their ideologies.

“My experience is that groups like this tend to get fired up and tend to focus on one election,” he says. “Then they dissipate. But those who are really engaged and got involved, they have the bug. These people will probably get involved in the Republican Party.”