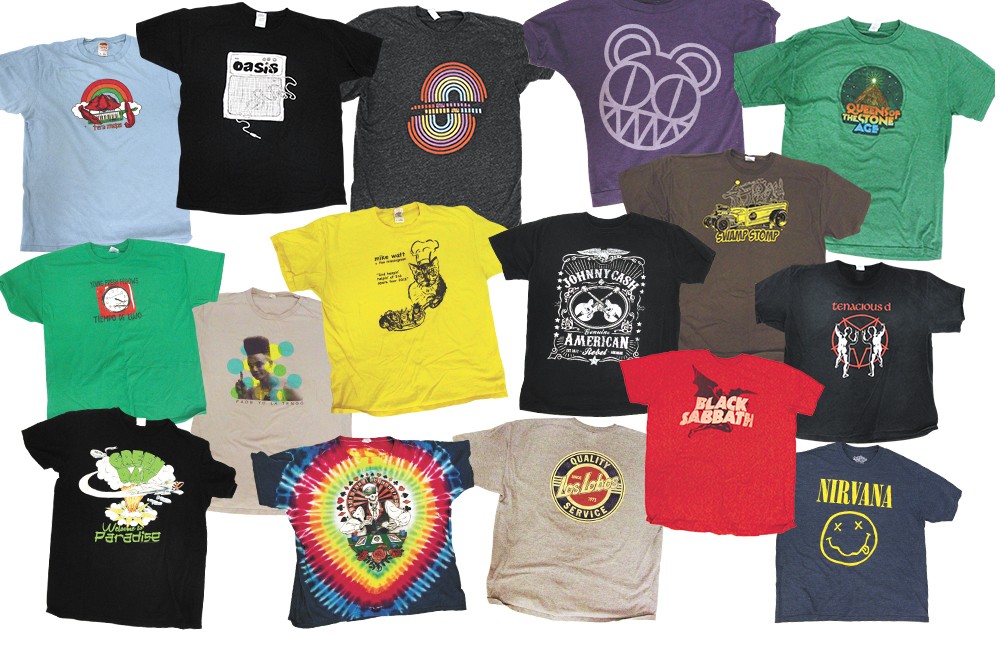 to buy shirts when they go experience live shows.

There's band loyalty for sure, as a T-shirt is a way to support a favorite artist while also telling the world that you love the Beatles, Bad Brains or the Biebs. There's also the fashion choice involved, since concert tees are one of the ultimate manifestations of "casual wear."

More than anything, though, grabbing a shirt at a show is a way to hold on to a physical memory of a fleeting artistic moment, the concert itself. Sure, you can record songs on your phone or find online bootlegs of shows you've attended, but those recordings are never as good as standing there, in the moment, hearing Willie Nelson pick through "Whiskey River," Katy Perry croon "Firework" or Motörhead whip up a pit with "Ace of Spades."

No genre takes its T-shirt game quite as seriously as metal. That's where you tend to find the most colorful and elaborate (and sometimes frightening) designs.

One recent night at Northern Quest Resort & Casino, Seattle prog-metal band Queensrÿche played a show to a room full of fans who'd clearly followed them since the group's '80s heyday. Many of those fans happily lined up to buy a new shirt — especially given that they were selling for $25, a screaming deal compared to, say, Def Leppard's $45 shirts a few weeks earlier at Spokane Arena.

Ryan Hernandez, a 49-year-old Spokane resident, was wearing a shirt from the band's 1988 "Operation: Mindcrime" tour as he bought a new one. He tries to get a shirt at every show he attends, no matter the band.

"Memories," Hernandez says about why he buys concert tees. "Memories, and defending the heavy metal faith. You're going to the shows, and letting everyone know you support your band."

Brandy Pement bought a new Queensrÿche shirt, too, her second in two years after seeing them last year in her native Lewiston, Idaho. The 38-year-old tries to get a shirt at "about every show," but the prices are a bit much sometimes.

"When I came to the (Lynyrd) Skynyrd show, I almost didn't buy one because I think they were, like, $45," Pement says. "And they didn't even have the Confederate flag on them."

Classic iconography goes a long way on some band's tees, even a controversial image like that of Lynyrd Skynyrd's flag. Iron Maiden fans generally want to see "Eddie," the band's mascot, somewhere in the design. And Metallica's early shirts made an artist named Pushead a household name — at least in thrash-loving households — thanks to his creepy, distinct drawings. Raymond Pettibon's distinct anti-authoritarian imagery on shirts for old punk bands on the SST label, like Black Flag and the Minutemen, made them seem a part of a cohesive philosophical movement despite their musical differences.

I have about 30 concert tees myself, some part of my regular wardrobe rotation, and others tucked away in a box, too tattered to wear but too precious (to me) to throw away. I buy them mostly to support indie bands who could use the money, and I don't worry about the design or color. I have some of the ugliest, brightest tees in captivity thanks to buying Mike Watt shirts for the past 25 years. My most sentimental is also the one I'm least likely to ever wear — my Grateful Dead tie-dye from a 1991 Las Vegas show that I keep not because I'm a Deadhead, but because it was one of my favorite teenage weekends with some of my best friends.

I recently traveled from Texas home to Spokane, and the Replacements T-shirt I was wearing inspired no less than three different interactions over the course of the day with strangers who love the '80s-era Minnesota punkers, too. Truth be told, there are few compliments I appreciate more than having a random person point and say, "Nice shirt, love that band." And there are few compliments I offer up more often to other music lovers.

Choosing which musicians we're willing to put on our chests says a lot about us. They help determine how others see us, and affect our interpersonal interactions. Send the same person to the mall rocking a Slipknot jersey, a Nicki Minaj tee or a Brad Paisley shirt, and they'll find themselves in conversations with vastly different types of people.

T-shirts are tribal signifiers that allow indie rockers, metalheads, cowboys, pop fans and the like to spot their own kind from a distance, and feel at home in strange places. And if you're a fan of all sorts of music — as many of us are — the decision to thrown on, say, Led Zeppelin versus Lady Gaga versus Ludacris in the morning is a significant one.