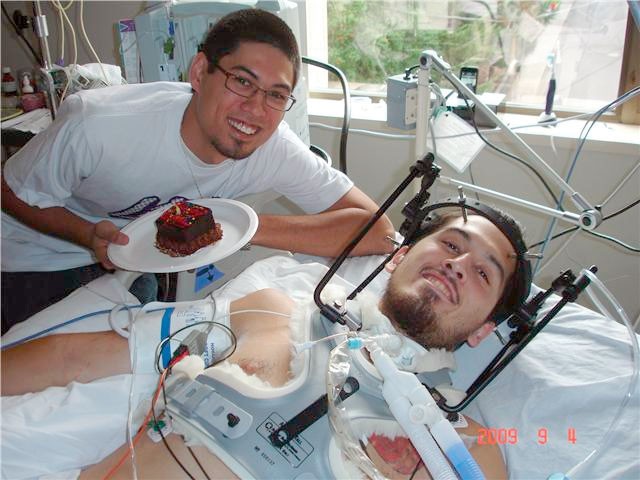 Robert Yamada and his brother Jeffrey.

Spokane resident Robert Yamada never knew how many friends he had. But when he suffered a spinal injury that left him paralyzed from the neck down, a vast network of friends, families and strangers gathered around him in support.

There is the handful of people who’ve flown to visit him at Craig Hospital in Denver and those he talks to by phone — his girlfriend, father and brother in Spokane.

But every day, he also hears from aunts and uncles, school friends and complete strangers on a Website his parents set up for him at CaringBridge.org the day after his August accident.

CaringBridge allows users to fill in a set of tabbed Web pages — one for background information, a “journal” page for updating friends and family, a “guestbook” for visitor comments and a photo page. Unlike Facebook, it’s designed specifically for the families of trauma victims to keep in touch with everyone concerned about the patient’s condition.

After just a couple of months, Robert’s CaringBridge Website has recorded nearly 40,000 visits.

Just accepting their new reality sometimes overwhelms Robert’s parents. “When you have a 21-year-old who is happy, healthy, strong, has a girlfriend, is going to school, has a job, and all of a sudden, boom, he’s paralyzed and can’t do anything on his own, that’s a major life change,” says Robert’s father, John Yamada.

Monitoring Robert’s treatment, taking certification courses for his long-term care and continuing to financially support their children, one of whom just started college, have been enough to exhaust both John and Robert’s mother, Renea.

In this most difficult time, they need support and encouragement and many people who care about Robert want to hear about his progress. But piled atop the emotional and logistical load they’re carrying, corresponding with relatives and friends is simply exhausting for the families of trauma victims, says Mary Jo Moore, nurse manager in the ICU at Sacred Heart Medical Center.

That’s why hospital staff members recommend that patients’ families use a Website, rather than e-mail and phone contact, to keep up with family and friends who would like to offer support and know what’s going on with the injured or ill person.

“It’s a very nice way to keep in touch without bothering the family with phone calls and [asking for] the information they get tired of repeating,” says Moore. Even the non-tech-savvy can easily maintain a CaringBridge site, she adds. Sacred Heart gives the families of trauma patients a brochure with easy-to-follow instructions for setting up an account.

If it’s more comfortable, Moore also often recommends using an existing account on a social networking site. “A lot of people use MySpace or Facebook,” she says. “They prefer to do that because they already have a MySpace account set up.”

Talking via webcam can help cut down the need for hospital visits, which are especially costly in cases like Robert’s, where the patient is being treated out of state.

Keeping up a CaringBridge journal allows families to vent frustration and sadness or celebrate small victories. “It gives [the families of trauma patients] an outlet,” says Moore. “They’ll type up a journal every day as to what happened — their thoughts, their feelings, hopes, fears.”

While she’s in Denver with Robert, Renea Yamada is communicating almost exclusively through CaringBridge. She leaves daily updates, sometimes responding to notes she receives on the site. The family also posts news at www.friendsofrobertyamada.org. In both places, she keeps readers updated on Robert’s progress — “Tonight Robert ate a great dinner,” she wrote one night. “This marks the first time since his accident that he has enjoyed food. Small miracle!”

Valerie Trovato, a special education teacher in Townsend, Mass., has become one of his greatest supporters. She has never met Robert, but she visits his CaringBridge site daily and the notes she leaves him sound like letters from an old friend. She tells Robert about her friend Ben, who is also in rehabilitation for a spinal injury. She offers encouragement for Renea Yamada and tells stories about her students.

Trovato drove the four hours from Townsend to upstate New York to attend a fundraiser organized by her mother — who is a friend of Robert’s New York relatives — for Robert and his family.

“Robert, you truly are an inspiration to others!” she wrote one day in late September. “Because I teach special education, my students often feel like school is a hurdle they cannot possibly get over, but I work to convince them that their hard work will pay off. This year I can share stories of the hard work you and Ben face, the positive attitudes you exhibit toward that hard work, and the progress you are making and use those stories to inspire my students to keep pushing.”

Erika Prins is an intern with The Inlander.
More