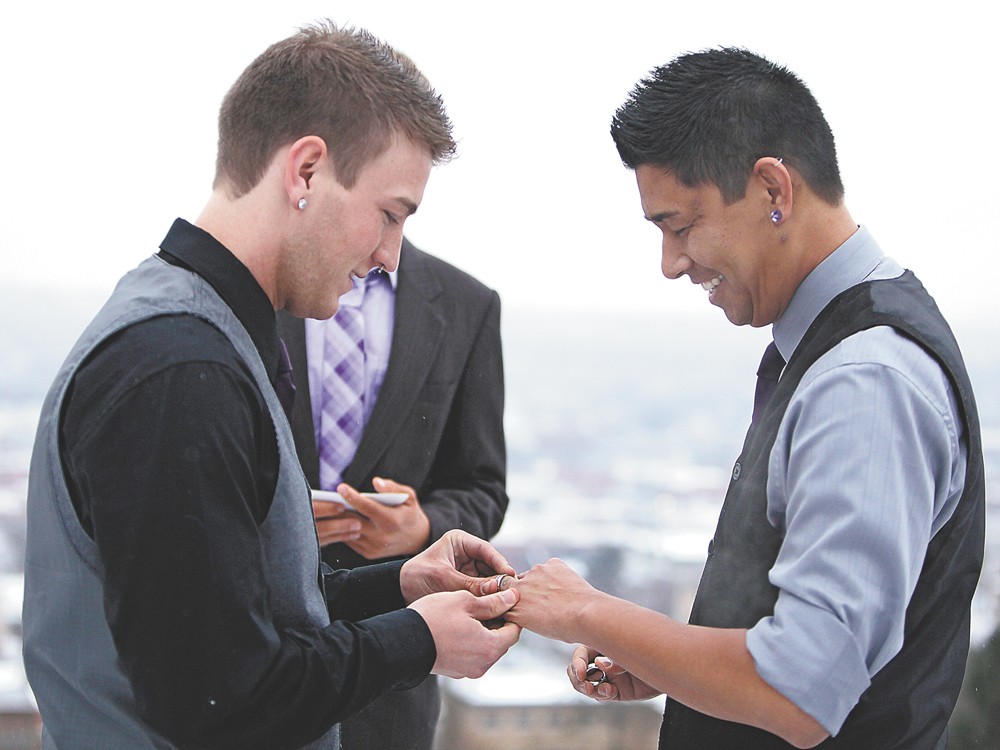 On a cliff overlooking a fog-buried downtown, Chris Rogers and Matt Dill can see their breath. They glance from each other to the snow gathering on the toes of their black dress shoes and back up again. It takes their friend Robbie Poteet a few tries before he can speak without crying.

“Take care of each other,” Poteet, who got ordained just for this day, tells them. “Remember you are both young and there will be obstacles.”

Dill and Rogers have entire futures ahead of them, but they also know what it means to struggle. Rogers, 22, and Dill, 24, have already been through unsupportive families and failed relationships. They’ve nervously watched election night results trickle in, waiting for voters across Washington state to decide whether they deserved to marry.

Since voters said “yes,” the two have attracted plenty of attention. They were the first in line for their wedding license last Thursday when Washington’s same-sex marriage law, Referendum 74, took effect. They shivered on the steps of the Spokane County Courthouse at 5 am and talked to newspaper reporters and all three news stations.

After they finally got their paperwork, they tried to slip out of the courthouse without being spotted by a TV reporter they’d promised a second interview. They pulled their gray hoods over their heads and looked down as they pushed through the courthouse doors. It didn’t work. They stepped in front of the camera and told the reporter it feels good to be equal. They lit cigarettes as soon as they were out of sight.

Today, at their wedding — a ceremony at Edwidge Woldson Park, where they planned to be united in front of just a handful of friends — there are five reporters and photographers.

“I think there are more of them than us,” Rogers says afterward, laughing.

“But we’re glad someone wants to tell our story,” Dill adds.

The pair met through a mutual friend and went on their first date to the Coeur d’Alene Casino, where they “just hung out” and Rogers taught Dill how to shotgun beer. They say they bonded immediately, and a year later Rogers wanted to propose. He hid clues for a scavenger hunt around their apartment and woke Dill from a nap to make him find them all before he had to go to work for the night. “It was sweet,” Dill says.

They got a domestic partnership soon after (thinking, “we’ll take what we can get,” Rogers says) and celebrated with friends, still hoping someday they could call it a marriage. Stirring iced caramel Americanos down the street from the courthouse, they’re wearing jeans, T-shirts and the same Vans shoes in different colors. On what’s been chalked up as a history-making day, the two are completely calm. They both say the other keeps them grounded.

“Chris has got the biggest heart. He can talk any friend off the ledge,” Dill says. “He would give the shirt off his back, and then if another friend needed it, he’d go back and cut that shirt in half. Then he’d sew a shirt out of his pants.”

At the ceremony Sunday, the two take turns clutching index cards and reading each other vows. They say “I do.” They snap two black ring boxes open and then closed. They share a long kiss and then another. Friends snap photo after photo with their iPhones. Dill grabs Rogers around the waist, plants a kiss on his cheek and laughs as he tells him, “Now you’re stuck.”

Light snowflakes start to fall as two TV news crews plant their tripods and one reporter uses a paper clip to pin a mic to Dill’s vest. They talk about what it means to finally be afforded these rights. “It feels equal,” Dill likes to say.

After the cameras leave and their friends pile into cars, he grabs Poteet, who married them.

“Can we get one more picture?” he asks.

He clasps Rogers’ hand and they intertwine their fingers as they turn their backs to the camera, looking out over the cliff. Poteet snaps the photo and they all climb into a SUV, smiling, on their way to a late lunch downtown in a city where they can finally say they’re married.