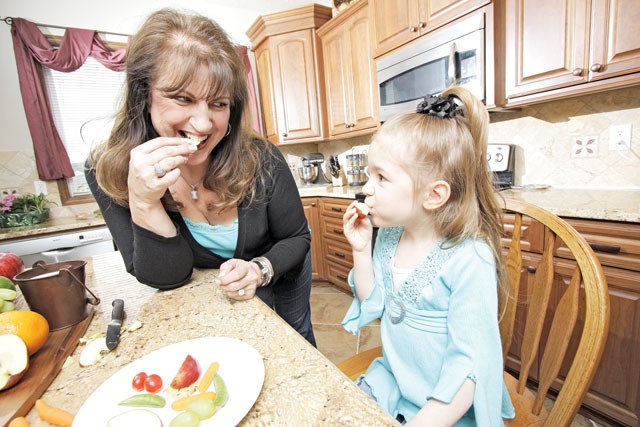 Just as children learn to clean their rooms and finish their homework, they need to establish healthy eating standards while they’re young. Habits, good and bad, become ingrained as children grow up. In fact, one of the best predictors of adult obesity is being overweight as a teenager. While just 25 percent of overweight preschoolers will remain heavy into adulthood, by the time kids are in high school, almost 75 percent of those who are overweight will remain heavy or obese as an adult.

I am trying hard to be an exception to that statistic. When I was growing up, eating was a favorite pastime of mine. I would constantly sneak food beyond what my parents allowed me. My family even insists I would stand in the pantry singing, “Cupboards, you are so good to me!” I’m still not totally convinced that’s true, but it is a fact that I weighed more than 200 pounds in elementary school. By the time I reached high school, I weighed nearly 300 pounds. I credit my parents’ support and encouragement with helping me at last develop healthy eating habits that will be with me the rest of my life.

For parents and kids struggling with weight issues, it is important to focus on the positive, rather than on deprivation and guilt. So here’s my Top 10 list of tips for parents to help kids who are overweight already or who are at risk of becoming overweight:

1) Make it easy to choose wisely. Have a variety of fresh fruits (berries, apples, oranges, bananas) or vegetables (celery, carrots, peppers, cucumbers) available for an afternoon snack or just to grab and go. It’s obvious but true: You can only eat what’s there, and you can’t eat what isn’t there.

2) Avoid most foods marketed to children. There are many foods either advertised as healthy or often thought to be healthy that are often filled with sugar. For example, a small bottle of fruit juice can have 50 or more grams of sugar. Energy bars, sports drinks and most foods with cartoons on the package are loaded with sugar. Some foods marketed to children may be fortified with one or two vitamins, but that doesn’t mean they’re healthy.

4) It’s OK to include treats. Don’t put treats under lock and key. It’s fine to include not-so-healthy foods in the diet as long as they are not frequent. Use them as a special reward or for special occasions.

5) Include daily physical activity. Any form of physical activity can be considered exercise; it doesn’t have to be on a certain machine or as part of some organized outing or sport. Encouraging general activity is often easier and more successful than mandating “exercise sessions.” Something as simple as taking a family walk or going to the park to play on the equipment is a step in the right direction. Have fun getting active and choose toys that require active participation — scooters, bikes, balls.

6) Have fun with cooking. Children will appreciate food more if they have a chance to help out in the kitchen. Guide them to creating healthy snacks. For beginners, try making no-fat Jell-O squares with fruit slices.

7) Replace all calorie-containing beverages. Many so-called health drinks and even fruit juices contain sweeteners such as sugar and high-fructose corn syrup. Studies show sweet drinks don’t contribute to feeling satisfied, so they aren’t a good place to spend calories. It’s best to replace most sodas, juices and sport drinks with water.

8) Have healthy cereals around for breakfast. You’ve heard it before: The best way to start the day is with something healthy. People who eat breakfast are less likely to be overweight. Rather than a sugary cereal, try good old-fashioned rolled oats. Other whole grain options such as Cheerios or Wheat Chex are also acceptable.

9) Limit sedentary activities. While playing video games and watching TV are OK in moderation, don’t underestimate how much these activities can limit other healthful pastimes like active playing and exercising.

10) Above all else, set a good example. Don’t for a minute forget that children model their own behavior after their parents’. If parents consistently chow down on fast food, and munch on junk food while parked in front of the TV, that’s what the kids will do too. So, make sure to eat your veggies and get some exercise. After all, your good habits won’t just help keep you healthy; they’ll also be forever ingrained in your children, helping them to live longer and healthier, too.

Zach Hunt is a fitness trainer in Spokane.