Welcome to: Your Town

This is how Spokane wants to greet visitors? 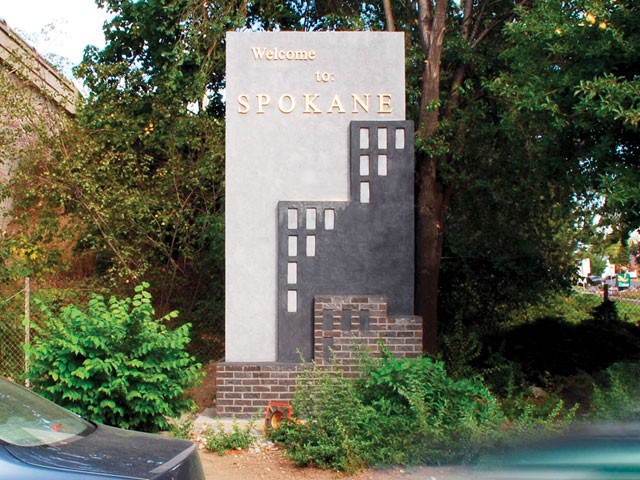 Tammy Marshall
The sign erected at Division and 4th Avenue

Many cities rightly worry about their gateways, about the first impressions made on the visitors at their doors. Mayor Jim West used to obsess over it. In 2003, design students at Washington State University's Riverpoint campus absorbed themselves in envisioning the perfect entryway for Spokane.

The Associated Garden Club worries about these things, too. The 70-year-old organization — which birthed Spokane’s annual Lilac Festival and uses the proceeds of its frequent garden sales to pay for urban beautification — has been trying to get a “Welcome to Spokane” sign at Fourth Avenue and Division Street for nine years, through four mayoral administrations. They even raised $25,000 through their plant sales to pay for it.

What they have gotten now is the sign pictured above.

Completed in late July, the roughly 18-foot-by-8 monolith depicts a city skyline in shades of brown, black and gray. No recognizable Spokane icons, no hopeful color. The husks of buildings against the slate sky seem to recall post-war Dresden more than a thriving Northwest metropolis.

“Spokane was a brick-and-mortar town. It was a lumber town. That’s reflected in the base of the monument, in the clinker brick,” says Dave Steele, the city’s new efficiency expert, who was in the public works department in 2007 when he was approached by the garden club to help design a welcome sign. “The form is reminiscent of the old skyline. We wanted to show the modern Spokane coming out the top of that.”

But Bob Scarfo, an associate professor of landscape architecture at WSU-Spokane, suggests Steele’s version of modern looks downright grim. “It lacks a brightness. It lacks a lightness. And I really hate to say this, it almost says Spokane’s an industrial city. If that’s near nature and near perfect, then we’re missing something,” says Scarfo, who taught Steele at WSU some 10 years ago.

Scarfo also takes issue with the sign’s placement and argues that, far from being a gateway that welcomes people to the city, it’s a mere blip on the radar.

“Landscape is narrative, and we read the landscape. People are reading as the drivers of cars. They’re reading the landscape with regard to the vocabulary that allows the cars to move and get to their destinations,” he says. “And there’s this one little [sign] that’s located at a place where they’re also looking to merge with traffic … It’s a small punctuation mark in a much larger sentence, and it needs to be the sentence.”

Speaking of punctuation, consider the colon in “Welcome to: Spokane,” which is not only grammatically incorrect but almost suggests (along with the lack of recognizable buildings, which Steele says he thought would have been “cliché”) that the sign was ordered wholesale from some municipal catalogue. “Hello, My Name Is: Your City’s Name Here.”

“There’s a colon?” Steele asks with a laugh, when confronted. “I’ll have to go back to my earlier drafts and see if it was in there. We can easily go back [to the sign] and pull the colon off of there … It would take a writer to notice that.”

The sign may have been a better project for an artist.

“Dave Steele has some design background, but Dave Steele is a landscape architect. He’s not a sculptor, an artist in the true sense of the word,” says Scarfo, who was reluctant to critique his former pupil. “It would be interesting to see what a Ken Spiering would do.”

Of course, Steele wasn’t the only non-artist to get his hands on the project. He and the garden club’s Marie Mann describe a years-long struggle to erect the sign. Steele says it took six months going back and forth with the garden club to settle on a design, followed by a “long, long, long process” with the state, which owns that piece of land and was concerned with the engineering, the archaeology, the footings, the foundations. The state, Steele says, shrunk the project by a few feet in either direction and stripped the sign of the phrase “The Lilac City,” which the gardeners wanted.

Still, the garden club seems reservedly pleased with the project. And perhaps they should be. At $15,000, it came in almost $10,000 under their budget.

“The sign is up. That’s what counts,” says Mann. “Dave Steele did a beautiful job.”