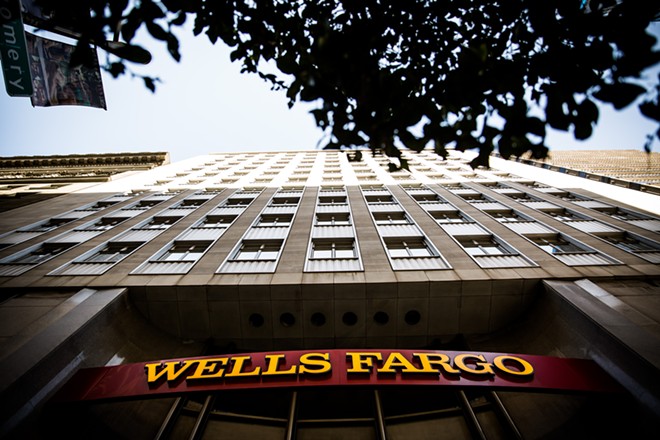 Max Whittaker/The New York Times
The headquarters building of Wells Fargo in San Francisco on Sept. 16, 2016. Wells Fargo said on Aug. 31, 2017, that an internal review of its potentially fraudulent bank accounts had uncovered a total of 3.5 million such accounts, some 1.4 million more than it had previously estimated.
By STACY COWLEY
© 2017 New York Times News Service


Wells Fargo said Thursday that an internal review of its potentially fraudulent bank accounts had uncovered a total of 3.5 million such accounts, some 1.4 million more than it had previously estimated.


The bank also raised a new issue: unauthorized enrollments of customers in the bank’s online bill payment service. Wells Fargo said that it had found 528,000 cases in which customers may have been signed up without their knowledge or consent, and will refund $910,000 to customers who incurred fees or charges.

“We are working hard to ensure this never happens again and to build a better bank for the future,” Timothy J. Sloan, Wells Fargo’s chief executive, said in a written statement announcing the review’s results. “We apologize to everyone who was harmed.”

Wells Fargo touched off a scandal last September when it agreed to pay $185 million to settle three government lawsuits over the bank’s creation of potentially millions of unauthorized customer accounts.

Wells Fargo has acknowledged that thousands of employees, trying to meet aggressive sales goals, created accounts in customers’ names without their knowledge. Employees received bonuses for meeting the bank’s sales targets — and risked losing their jobs if they fell short.

At the time, the bank said that 2.1 million suspect accounts had been opened from 2011 to mid-2015. The bank later expanded its review by three years and examined 165 million bank accounts that were created from January 2009 through September 2016.

That review turned up the additional accounts that may have been fraudulent — a nearly 70 percent increase over Wells Fargo’s initial estimate.

In some cases, customers discovered the fraudulent accounts only when they incurred fees on them. Wells Fargo said it has paid customers $7 million to refund those fees. It also agreed to pay $142 million to settle class-action claims over the accounts.

The review Wells Fargo concluded Thursday focused on retail bank accounts, and did not expand into other areas in which the bank has been accused of wrongdoing, including improperly withholding refunds that were due to some car loan customers and charging some customers for auto insurance that they did not need.

How to Tell a Political Stunt From a Real Vaccine