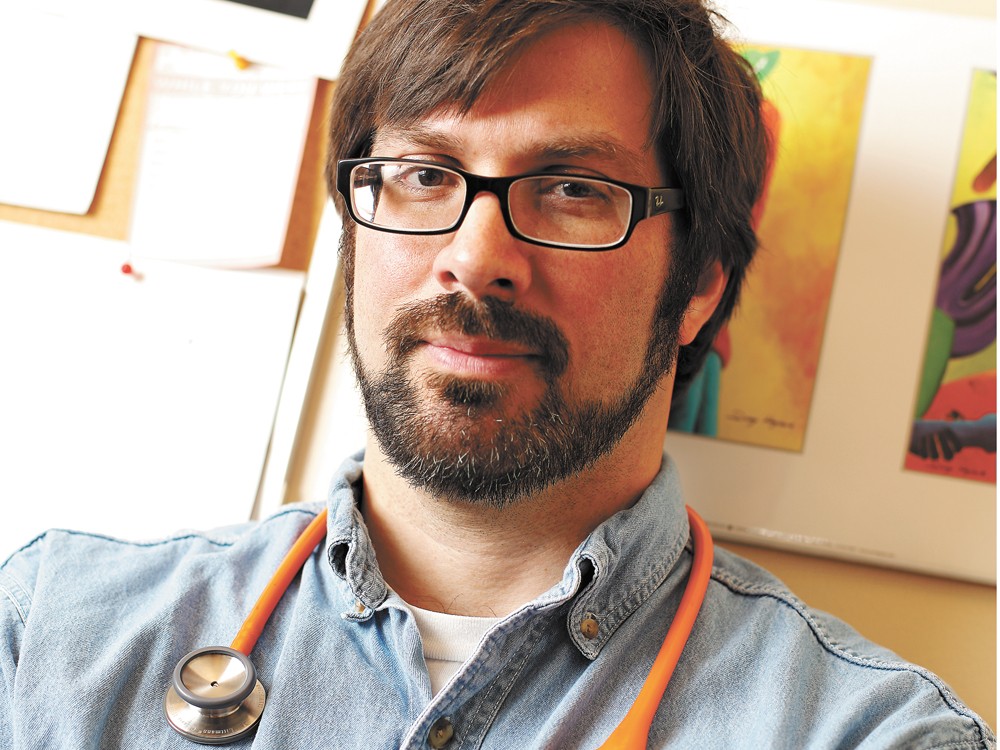 Young Kwak
“This is definitely a step in the right direction,” says Bill Bomberger of Community Health Association of Spokane.
In a doctor’s office where everything has a purpose — a standing-height computer desk, medical books, a flier with the meeting times for a local Narcotics Anonymous group — the picture of President Obama on Inauguration Day looks out of place.

But when Physician’s Assistant Bill Bomberger talks about the future, he points to the photo and he sounds hopeful.

“The system we have right now is so broken. I think this is definitely a step in the right direction,” Bomberger says about the Supreme Court’s decision to uphold the federal Affordable Care Act last week. “I’m a believer.”

Bomberger, 41, sports rectangular Ray-Ban glasses and a dark beard. He darts from his office to the exam room next door, getting paperwork done in between patients. Community Health Association of Spokane runs eight clinics in town, including the downtown Denny Murphy clinic, where Bomberger has worked for five years. He has about 2,000 regular patients and sees 20-25 of them a day.

Some qualify for Medicaid, but about a third of them have no insurance coverage at all. That means they may have been putting off seeing a doctor for a long time and their problems have likely worsened, he says. At CHAS, the uninsured get services on a sliding scale. Not every type of visit qualifies, but most basic appointments start at $20.

In light of the court’s ruling, clinics like CHAS could see a huge influx of low-income people who may soon have access to some sort of coverage for the first time.

States will have the option to take federal money to expand their Medicaid coverage. The threshold to qualify for the government program is set at the poverty line: $23,050 annual income for a family of four. But states have the option to use federal dollars to expand it up to $30,656 for a same-sized family. They’ll be required to set up insurance exchanges, where people can shop among various plans.

Washington has already started building its exchange, and Insurance Commissioner Mike Kreidler has said the state plans to expand Medicaid. Idaho’s Republican-dominated Legislature hasn’t started work on an exchange (it refused federal dollars to help start one), and has vowed to continue working to overturn or nullify the reform in the state. Democrats there are calling for a special session or executive order to start preparing an exchange.

If Washington does expand Medicaid, 50,000 more people in the Spokane area would qualify, says CHAS’s Executive Director Peg Hopkins. And that could drive many of them to appointments they’ve putting off, she says.

“Although now there are going to be lots more insurance options for people, that doesn’t mean there’s a single more doctor in the system,” Hopkins says. “That’s a grave concern to those of us on the delivery side.”

At the downtown clinic, patients are sometimes told they’ll have to wait two months for an appointment. Doctors share offices, and the exam rooms have a constant stream of patients in and out. A list on Bomberger’s computer screen breaks down the day ahead of him. Each time slot is color-coded based on whether the patient is new or returning. With only a few exceptions, each one is limited to 15 minutes. As he stands at his computer pecking notes into the office’s computerized record system, Bomberger keeps an eye on that list and on the clock. If he doesn’t stay on schedule, he’ll get behind. His next patient will have a longer wait and the next one even longer.

On top of a struggle for enough providers and space, traditional clinics can sometimes be reluctant to take Medicaid or other policies for low-income people because the reimbursements to the provider are lower, Bomberger says. So just because more people are insured doesn’t mean they will have access to every clinic in town. That means CHAS can’t slow down. The group is already expanding its Maple Street clinic and while plans to expand others aren’t official, providers, staffers and leadership say it’s inevitable.

Among the uninsured, many still don’t know how the court’s decision will help them.

Kent Krigbaum, 48, came to Spokane four years ago battling addictions to methamphetamine, cocaine, marijuana and opiates. Today, he’s the program manager of the Dream Center Church and says he’s been sober for 52 months. But one thing has followed Krigbaum from his old life to his new: his lack of insurance. He can’t afford private coverage, but his income is too high to qualify him for programs like Medicaid.

“I’m right above one, but too poor for the other,” he says.

He visits Bomberger at CHAS every six months, and pays for the visits and the handful of medications he takes out of pocket. Recently, a virus threatened vision in one of his eyes, and Bomberger told him he needed to see an optometrist.

“I said, ‘I can’t afford that. I can barely afford this,’” Krigbaum says.

CHAS representatives were able to get Krigbaum help through the Spokane County Medical Society’s charity program Project Access, which connects low-income people with specialists like surgeons or optometrists. But that, like all safety net programs, has limited resources and “can’t help everyone,” Bomberger says.

Krigbaum’s situation isn’t unusual to Bomberger. Most of the people he’s trying to help are “just trying to make ends meet.”

Gonzaga University constitutional law professor Vickie Williams spent years as an attorney helping Washington state’s hospitals navigate health-care law. We sat down with her to talk about last week’s historic court decision and how it hinged on Chief Justice John Roberts deciding the mandate to buy insurance was simply a tax.

INLANDER: Reading your blog, it seemed like you were impressed with Roberts’ decision?

WILLIAMS: I was impressed with the skill which he crafted the majority to uphold the law. I’m a bit suspicious of the grounds with which he was able to get that majority, the taxing-power argument. … If you read the opinion, he says this is a pretty weak argument, but it’s good enough.

Why would Roberts care that much about tailoring an opinion like that?

What unexpected effects might we see from this decision?

I think the bigger concern I have about what might happen is on the Medicaid mandate piece. It’s a real change for the court — [a majority of] justices agreed that the expansion of Medicaid to child-less poor adults [by threatening to remove all the state’s Medicaid funds if they don’t comply] is unconstitutional.
Up until then the court had never ever pronounced a federal spending program to be too coercive. … This one they did.

Does the fact that this was a close decision justify Washington Attorney General Rob McKenna’s joining the lawsuit against the insurance mandate?

The fact that it was a close decision, and that a majority of the court would have stricken it on Commerce Clause grounds bodes well for his decision to file it. Whether it was a lot of wasted time and money or in the state’s best interest is another story.