Michelle Janning created an all-season outdoor living space at her Walla Walla home. Originally from Minnesota, she spent part of her childhood living in Germany, and also lived in Denmark as an adult.

Like millions of viewers of HGTV, Michelle Janning is fascinated by homes. How they look, what's in them, and how they're organized. Unlike most of us, Janning has made a career of peeling back the layers to reveal what our homes say about us and the culture we live in.

"I grew up in a rural area and remember distinctly as a teenager asking my parents if I could get a subscription, not to Seventeen magazine or something like that, but instead to Elle Decor because I was so fascinated by the aesthetic transformations of anything," Janning recalls.

A college sociology and anthropology class helped her recognize that her curiosity could inform broader studies. Similar to how researchers might analyze objects found in an archaeological dig and speculate on how they were used in long-vanished societies, Janning, now a sociology professor at Whitman College and the author of The Stuff of Family Life: How Our Homes Reflect Our Lives, unearths the meaning behind how we create a home, as well as all those objects that fill it up.

"The reason for redoing your house beyond your everyday life is because you have this audience of people who could look at you as a certain kind of person. And whether they're doing it or not, you then start to think about, 'How do I see these people seeing me?' and does that make me feel OK about myself?"

It's a concept in sociology called "the looking-glass self" — we see ourselves as we think others see us. "So if I have redecorated a room in my house... and somebody says, 'Oh, it looks so good! You must be so happy here!" I'm like, "Hooray for me! I did a good job!"

How we see ourselves plays out in a myriad of ways in our homes, says Janning. For example, there are strong, and frequently gender-based indicators of what constitutes a "good home."

"It's important to note that we get ideas for what we think counts as a 'good home' from lots of places," Janning says. "And a 'good home' doesn't just mean the building. It means the things that are going on inside of it... There's a display that we participate in of how well our family life is going. It's kind of a performance, and there could be pressure in our life to make it look good."

Or consider the "minimalist" movement. Those gloriously uncluttered rooms in magazines and on social media reveal socioeconomic underpinnings. "You have to have resources to be minimalist," Janning notes. Saving stuff because you might need it again someday can reveal less economic security.

And saving stuff also has generational implications. One thing Janning inevitably hears from audiences at her guest lectures is that "there's a lot of stress between generations about whether kids want your stuff or not. And whether certain kids want certain things and then they fight with siblings about that. These are really emotionally difficult subjects for families. And to me they tell the story of what are the values that we are attaching to these objects." 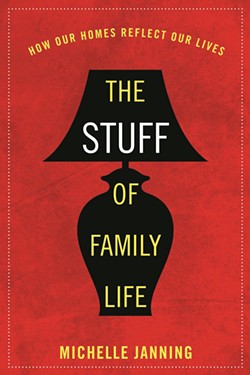 Michelle Janning is also the author of The Stuff of Family Life: How Our Homes Reflect Our Lives; Love Letters: Saving Romance in the Digital Age, and Contemporary Parenting and Parenthood: From News Headlines to New Research.

So to parents offended or saddened that their child doesn't want an heirloom item, she says, "It's not actually about you. It's probably about a different way of thinking about lifestyle." For example, adult children may value convenience — they may not have much use for a set of formal dishes that can't even go in the dishwasher. Or they may not feel up to the responsibility of hauling around a large, heavy piece of heirloom furniture for the next 40 years. Janning gets that.

But children need to know that it isn't about them either, says Janning, who offers them this suggestion: "Think about historical references that might matter to somebody in your parent's position that would say to you, 'It's important that you think this is valuable.'"

Looking at the issue from the other person's perspective can help, Janning says.

For the older generation, "they want their family story to be preserved, to be important."

One solution is to just keep a few elements of a collection. "You can attach a lot of emotional space to one tiny object. You don't need 20 of them," she says. Other methods include digitizing heirloom items — taking a photo of the item and then sitting down with a relative and recording the story about it.

Years ago, Janning says her own mother was burdened upon inheriting a farm full of stuff when Janning's grandparents passed away. Now at 81 years old, "She wants to do the thing where, 'My gift to you kids is I don't want you to have a bunch of junk to go through,'" says Janning. So they're spending time together looking at items collected over the years and capturing the stories behind them. "And when we do that, it's really fun, and she's part of it."

Some of Janning's latest research considers the effects of the pandemic on home life. She's gathering survey data on the college students of 2020 and looking into whether "attending" college from their childhood bedrooms will delay their transition to adulthood. And she's pondered the effects of the massive early-pandemic purge that led to thrift stores inundated with donations. "I wonder if, as things start to reopen, there may be a little bit of remorse, a little bit of grieving over the loss of some of those things."

She's also at work on a new handbook for architects and designers that will offer ways they can incorporate social science research techniques to gather input from their clients to inform their designs.

At her own Walla Walla home, the pandemic inspired her to rethink the outdoor space as an extension of the indoor space. Already a fan of cold weather ("I'm a Minnesota kid"), Janning spruced up the patio and added heaters at the home she shares with her husband, son and dog, allowing them to entertain outdoors. She was also able to have outdoor office hours with her students all winter. "It was safe," she says, "and felt like we were people."