What Happens at Night

The joys of skiing under the lights after dark 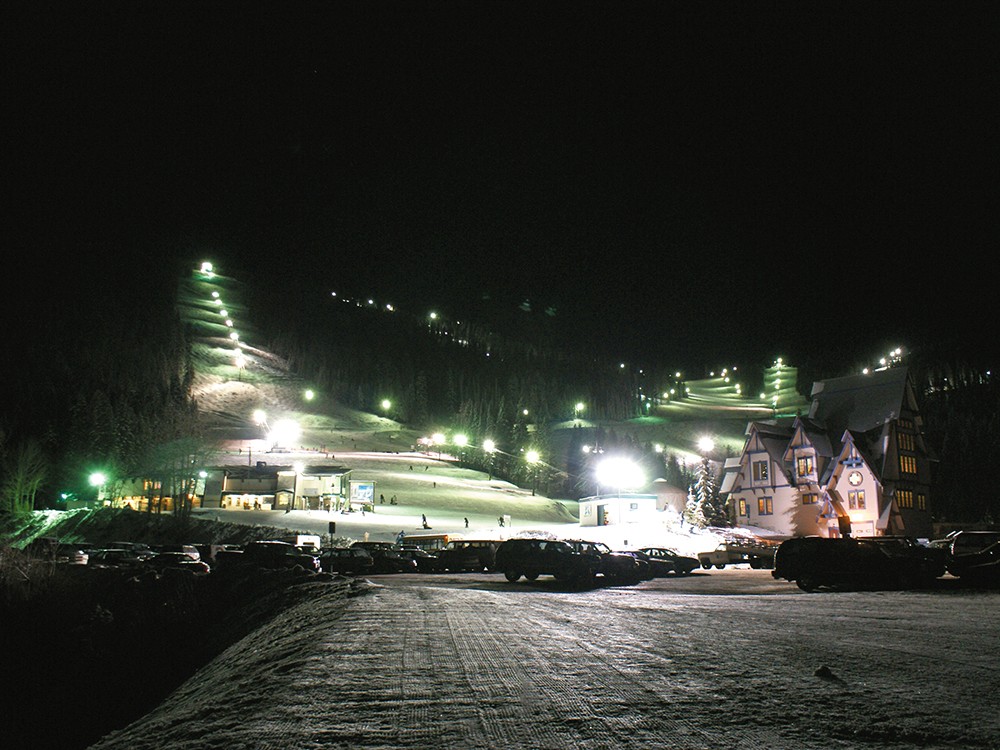 Seeing a mountain lit up at night takes me on a journey through different decades of my life. Like most things in life, we are influenced by our surroundings and upbringing. My first introduction to skiing was at Mount Hood at night under the brightness of the lights. Mind you, this was before poly pro and Goretex were affordable. Layers consisted of cotton and wool, not enough for my 7-year-old body to keep warm, and most nights consisted of me seeking out the fireplace in the lodge and sipping on hot cocoa waiting for my siblings and mother to finish up.

In my 20s and out of necessity, I found myself on the slopes night skiing while working a Monday-through-Friday office gig in Seattle. I was indifferent about the experience as it was all I really knew growing up, outside of a handful of family ski trips to Canada. My 30s brought me clarity and the self-proclaimed status of ski bum. My surroundings were heavily weighted towards first chair, powder mornings and untracked lines for as long as my legs allowed. Until the winter I moved to the Cascades for a season.

What I hadn’t calculated in my equation for snowfall and quality of terrain was the number of skiers also skiing on those same powder-filled slopes. I was spoiled living in the Inland Northwest. We had terrain, acreage, seemingly no lift lines and, in comparison, no crowds. My reality quickly shifted back to my upbringing. After working days shifts at Stevens Pass, I found myself gearing up night after night for some quality time on the slopes. While the lodges were still bustling from a busy day on the mountain, the slopes were significantly less crowded. The snow was falling, it was cold and I found myself enjoying night skiing differently than I ever had before.

Moving back to the Inland Northwest and finding myself back in an early morning routine, I had somewhat forgotten about the uniqueness of night skiing until a recent trip to Mount Spokane.

It was Powder Wednesday so my 3 pm arrival to the mountain was greeted with many skiers and boarders heading down the mountain road with smiles from ear to ear after skiing all day. I quickly booted up and made my way to the chairlift in hopes of finding some untracked lines. I was pleasantly surprised by the number of powder stashes still left so late in the afternoon. This was proving to be a promising evening. On a recommendation by a ski patroller with whom I rode the lift, I broke myself away from the skiing for a short little hike from the top of Chair 2 to the Vista House to take in the sun setting over Spokane — something not to be missed on a sunny afternoon and clear evening.

After the amazing evening light went flat, I made my way back down the mountain to the lodge. A noticeable shift from day skiing to night operations was in full effect. Ski patrollers were closing areas of the mountain only open during the day. Kids were booting up with jackets and speed suits that were adorned with SSRA (Spokane Ski Race Association) patches and logos. Lights were starting to flicker on, illuminating the mountain side, and night skiing was underway.

I was reminded of the many advantages of skiing at night, including the obvious financial factor. Most mountains in the area offer some type of night skiing with inexpensive rates. But the leader in the region for amount of terrain (15 runs lit for night skiing), hours open (Wednesday through Saturday nights from 4-9:30 pm) and access (only 35 miles from downtown Spokane) is Mount Spokane. A $20 bill will get you on the slopes at 4 pm and offers a great assortment of terrain for every ability level including a well-developed terrain park.

For youth and seasoned pros alike, night skiing also offers an element of adventure not found during the day. Cody Lile, who was raised in the foothills of Mount Spokane, recalls his night skiing days on the mountain. “I remember going up in the spring a lot as a kid,” he recalls “It stayed light pretty late. When we got there, we still had three hours of daylight skiing. We would then continue as the lights came on. We would pretty much ski until we got cold.”

Times have changed, and my preparedness for an evening on the slopes has improved. So as I continued to ski that Wednesday night under the lights with the glow of Spokane off in the distance, I remembered how over 30 years ago I was doing the same thing. Only this time, I didn’t seek out the lodge for cocoa, but instead enjoyed skiing fresh powder under the lights.