What If I'm Not Funny? 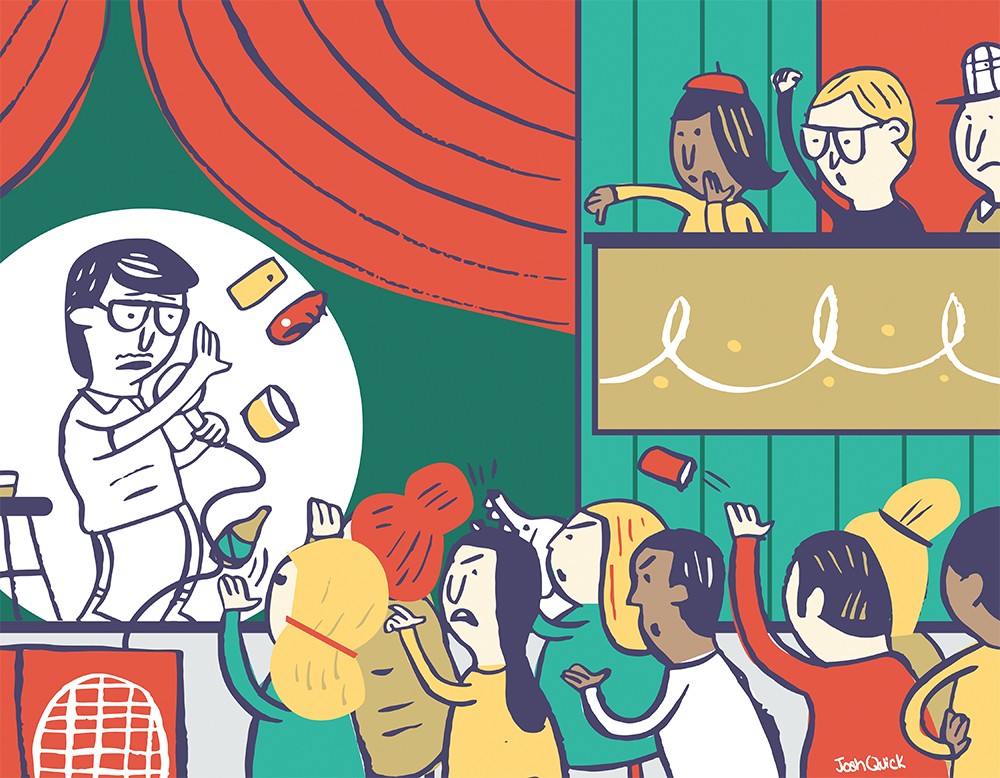 The first instinct is to dig a hole

and, once safely inside, ask someone to bury you. Or maybe run. You remember an emergency exit and figure that you could be through the door and in your car in maybe five minutes. A couple of hours later you could put a state between you and what just happened on that stage. Maybe you'll grow a mustache and start life over somewhere.

You can't do that, though, because there's a spotlight on you that's making it impossible to see what you're guessing is a sea of blank or puzzled faces. Or maybe someone videoing you. Oh God, please don't let anyone be taping this because your stand-up set has just bombed, and will likely continue to bomb through however many terrifying minutes are left in your set.

I've been there. I was hosting a stand-up showcase in Oregon. As I recall, about eight people showed up, so they began letting anyone in the bar back to the stage area for free. I was opening the show with what was, in retrospect, a terrible routine in which I read an email chain supposedly between my boss and myself. No one laughed, but the joke kept going.

"You suck!" someone yelled from the bar at the back of the room. Then people finally laughed. I was still up there, though, and terrified. I couldn't remember the rest of the bit at all. I introduced the next comic and bounded off the stage, as that comic spent a couple of minutes destroying me, as he should have.

Walking down the street after the show, a young woman told me, "You were actually kind of funny."

Maybe it was the pity or the "actually," but that made me feel worse about everything. I didn't get on a stage for more than a year after that, and missed some opportunities for spots on really fun shows because of my certainty that whatever set I delivered might bomb again and I would probably die. I didn't care at the time what I was passing up. I couldn't take that risk.

Now, though, I'm oddly proud of that night. I still cringe, but, shit, I'm still alive. And just so you know, if you're reading this, you will probably bomb too if you do stand-up. I don't know you, and I'm sure you're very funny, but getting up in front of a room with nothing but your sloppy old self in the hopes of making people laugh is really f---ing hard, and I'm just going with statistics. Even some of the greatest comics bomb, as they discussed on an excellent but short-lived Tonight Show with Jimmy Fallon YouTube series.

Jerry Seinfeld once did a set in a disco... while the disco music was still playing. And Hannibal Burress had a lesbian grab his balls. Amy Schumer bombed in Central Park. "There's nothing louder than the sound of 5,000 people not laughing at you," she recalled. Patton Oswalt is one of the funniest people alive, but he's bombed plenty. And he believes that bombing is necessary.

"Let yourself be completely defeated at least once," he says. "Something interesting will happen. You'll wake up the next day and the world doesn't end, and then you'll become fearless." ♦