Some tips on how to survive Hoopfest as a player

It's that time of the year when thousands upon thousands of basketball fans make a pilgrimage of sorts to downtown Spokane. For the spectators, the experience is easy. They get to sit back and take in the sight of streets clogged with hoops rather than cars. For a player, it's more complicated. The player wants to emerge victorious at the end of the weekend, but really he just needs to survive.

The best way to survive Hoopfest is to have practiced during the weeks leading up to it. That shouldn't be news to you, but if it is, it's too late at this point. Don't worry, though, because there are still ways you can survive the weekend, both physically and mentally.

Just like in college and the NBA, teams in Hoopfest get the chance to warm up on the court before the game. Unlike teams in those ranks, you don't really get to do any scouting of your opponents. The warmup period is the closest thing to a scouting report that you'll get.

You can practice the kinds of shots and plays you'll run in the game. Or you could throw up nothing but two-pointers, knowing full well you won't attempt a single one when they count.

Once you're on the court and in the game, the obvious way to survive is to outscore the other team. So score points. Though not necessarily enough to win. I'm saying this as someone who has been on the losing end of a 20-0 game. The moments after that game ended were exceptionally uncomfortable. Seriously, score at least one point.

Hoopfest allows each team a single, one-minute timeout per game. Using it at the right time, like to stop a run by the other team, makes you seem like a coaching genius. Though simply not forgetting to use it is all you need to survive. A single minute allows you to catch your breath and regain the energy and mind-set to carry on. For teams without a substitute player, the timeout becomes all the more valuable.

While you can't lose when you're not playing, the time between games may be the most dangerous time of all. Rainy weather can ruin Hoopfest, but the sun is no friend either. Find a place in the shade to pass some time, unless you want to suffer through Sunday with a sunburned shooting arm. Thanks to the tall buildings, most of the courts spend at least part of the day hidden from the sun.

Don't just spend time at another court; actually take in the games that are happening. For almost every team, Hoopfest ends in a loss. That doesn't, however, mean the weekend needs to be a failure.

Spending your downtime watching allows you to once again be a fan of the game, a concept which may seem foreign after a couple of bad losses. The sight of three costume-clad adults trying to dribble a basketball or little kids shooting on an 8-foot hoop is just the mental medicine you'll need to stay positive.

Don't let the World Cup and soccer fans fool you. Playing in, watching and surviving Hoopfest makes it clear: Basketball is truly the beautiful game. ♦ 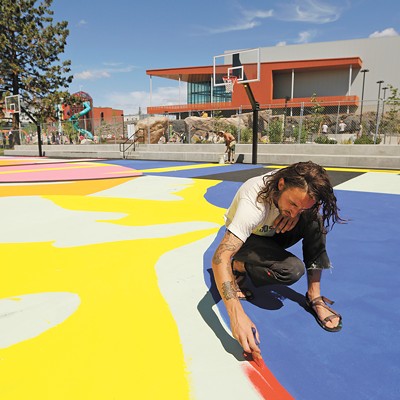