Obama is re-elected, pot legalized and, if the vote holds, Idaho’s school reforms will be rolled back 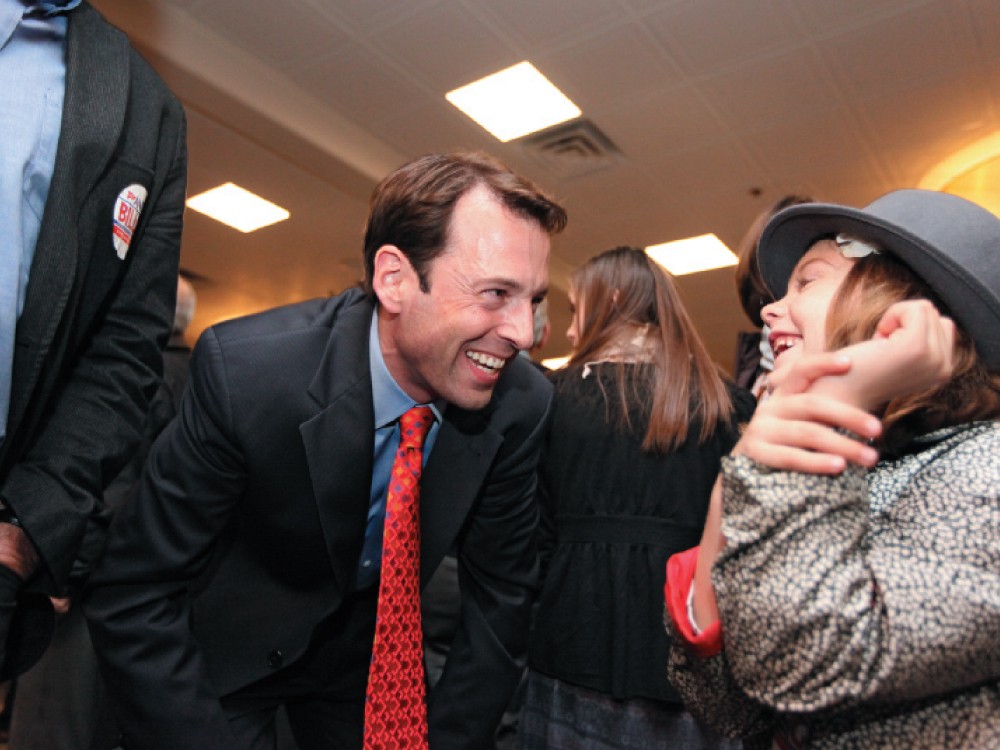 Marriage equality advocates across the nation celebrated history-making votes Tuesday night. In Washington, they were still canvassing at 4 am on Election Day, and celebrating, if cautiously, in a swanky downtown Seattle hotel into the night.

As of press time, Washington’s Referendum 74, which would uphold the Legislature’s legalization of same-sex marriage, which appeared set to pass by five points. It was a question of a “fundamental principle of fairness and equality,” says Zach Silk, campaign manager for Washington United for Marriage, which fought to pass R-74. And it could have big implications.

“We’ve definitely moved the dial on the West Coast," Silk said on Election Day. "This obviously has implications for how our neighbors will go forward and how the Supreme Court will understand this issue.”

Bucking the trend of 32 states whose voters refused to give gays the right to marry, Washington, Maine and Maryland legalized same-sex marriage. Minnesota’s constitutional amendment forbidding gay marriage was too close to call at press time.

The fight over same-sex marriage in Washington state was, at its core, a battle to tell the best story.

Proponents championed same-sex couples who were treated differently because they couldn’t use the word “marriage” to describe their lifelong commitments. Opponents warned voters about what’s happened in other states that allow gay marriage: school children learning about same-sex relationships in the classroom, private businesses being fined for refusing to serve gay or lesbian couples.

“The most powerful thing you can do in a political campaign is tell a good story,” Silk says.

Well, a good story and have a lot of money.

With the help of celebrities and corporations, Washington United for Marriage crushed the opposition group, Preserve Marriage Washington, in fundraising with about $12 million to Preserve Marriage’s $2.6 million. But R-74 opponents were confident Washington voters would reject it because “same-sex couples in Washington already have the same legal rights as married couples, children need a mother and father, and there are serious consequences to redefining marriage,” Chip White, Preserve Marriage’s communications director, said on Tuesday.

Washington’s next governor must figure out how to walk the state through a minefield of debt and an unemployment rate still above the national average.

Democrat and former Congressman Jay Inslee was leading by a narrow margin at press time. Inslee, a 61-year-old Democrat, has been a congressman from both Central Washington, and more recently, Bainbridge Island. He’s also practiced law and wrote a book on clean energy. Inslee campaign hard on jobs; he wants to encourage more research at universities, lure defense contractors to Washington and focus on the clean energy economy.

“He has loved traveling the state, getting to talk to people starting businesses” in fields like clean energy, Smith said.

But the winner will face a universe of pain. Earlier this year, the state Supreme Court declared that Washington schools were underfunded, in violation of the state Constitution. The court directed the state Legislature to fund schools, which some estimates say would cost between $500,000 and $2 million more per year. The state also faces a projected non-education spending shortfall of $1 billion for the 2013-to-2015 budget.

Outgoing Democrat Gov. Chris Gregoire isn’t exactly optimistic about the candidates. Gregoire, stepping down after her second term, said two weeks ago that neither candidate had a plan to deal with Washington’s troubled finances. Taxes, she added, would probably need to be raised.

Even if the race itself had been conventional, the matchup between Amy Biviano and state Rep. Matt Shea in Spokane Valley would have been interesting. Shea has not only voted for conventional conservative issues — like gun control and private property rights — he’s also advocated for more fringe causes, accusing the federal government of violating the 10th Amendment, pushing for state sovereignty, and endorsing FEMA camp conspiracies.

And Biviano, the former chair of the Spokane Democrats running in a very conservative district, focused not on her support for gay marriage or abortion rights, but on her more conservative plan for reforming the business and occupation tax.

Yet, the race became about much more than policy platforms.

“Unfortunately, for the campaign or the race itself, the media really missed the issues and focused on personality and the trouble the candidates had individually,” says Spokane County Republican Chairman Matthew Pederson.

Shea was pulled over by cops for brandishing a firearm, with an expired license, at a motorist. He refused to answer repeated interview requests from media outlets. He cried intimidation when someone sprayed swastikas on his campaign signs. And after Shea uploaded a photo on Facebook of himself campaigning in front of Biviano’s house, she called that intimidation.

And just when it seemed things couldn’t get any crazier, a blogger for a national conservative website exposed the fact that, back in college, Biviano had posed for the “Women of the Ivy League” section of the October 1995 issue of Playboy.

Ultimately, for all Shea’s baggage and all Biviano efforts — she says she knocked on over 10,000 doors, made thousands of phone calls and attended seven vote forums — the 4th District remains deeply conservative. Initial results showed her down by about 6,000 votes and nearly 13 percentage points.

From a loud and crowded election party on the state’s West side, pot activists promised Washington’s history-making approval of legal recreational marijuana is just the beginning.

“This is what the end of Prohibition looks like,” said Kevin Oliver, director of the Washington affiliate of the National Organization for the Reform of Marijuana Laws, on Tuesday night. “This is going to be a shot heard round the world.”

The moniker championed by supporters — New Approach Washington — is a sign of what made them successful. Barraging TV viewers with ads featuring moms and lawyers, they say they got the state’s non-smokers by emphasizing the taxation and regulation that’ll come with legalization.

Initiative 502 will legalize the possession of one ounce of marijuana for people 21 or older, regulate and tax growers and sellers and impose a 5-nanogram limit of active THC while driving. (Colorado passed a similar measure, but Oregon’s attempt failed.)

The campaign was never a matched fight, with New Approach Washington raising $6 million, largely from high-profile supporters and a national drug policy group, as two opposition groups struggled to break the $15,000 mark between both of them. But detractors hoped they had the facts on their side. No On I-502’s committee manager Steve Sarich is a strong supporter of legal pot, but he and others worried about the law’s DUI provision. Of course, pot possession is still federally illegal, so they worry federal authorities will sweep in and shut down any marijuana farms or stores, leaving the DUI rules.

“We’re afraid that this is going to be a bloodbath in Washington state,” Sarich said this week. “What we’re going to see is absolute bedlam being imposed on us by law enforcement and no pot stores whatsoever.”

Oliver’s cohort is more hopeful. Two states are enough to force a conversation with the feds, they say.

“This is designed to challenge the federal government,” he says, “and work with them to reform, bring an end to Prohibition as we know it and usher in a new age of marijuana reform laws.”

As the election dust settles, Republican Rep. Cathy McMorris Rodgers will likely continue in her climb up the Republican Party’s leadership.

By press time, McMorris was leading Democrat challenger Rich Cowan by about 20 percent.

“In my mind it was how we go about getting our economy growing and getting Americans back to work,” McMorris said Tuesday night, summing up what she thought the campaign was about.

Her return to Congress may be a dubious honor. Congress, according to various measures, is one of the least popular and least productive in the nation’s history. In February, Congress had a 10 percent public favorability rating — lower than Americans’ opinion of BP at the height of its oil spill.

McMorris Rodgers, 43, will have plenty of work ahead of her. There’s a stalled farm bill. There’s the looming “fiscal cliff” — a combination of spending cuts and a rollback of the Bush tax cuts that will likely force lawmakers to make some unpopular choices. McMorris Rodgers says she’s open open to negotiations with Democrats on ways to cut the national debt through spending cuts and revenue raises.

“It’s going to be give and take by both parties,” she says.

The former head of film company North by Northwest, Cowan spent the campaign accusing the congresswoman of not minding Eastern Washington’s affairs and talking about the need for more bipartisanship in Washington, D.C. Cowan, who was still knocking doors up until an hour before the polls closed, didn’t rule out a future run.

“We built a great organization in the district, all over [with] volunteers, people who are really excited about the candidacy and what we have to offer,” he said Tuesday night.

But for Luna, it wouldn’t be that easy. Those looking to strike down Luna’s reforms got on the airwaves early, says Yes For Idaho Education co-chair Wendy Horman. The deluge of information from both camps was often contradictory.

“You had to have hip-waders to dig through some of the information that was out there,” Horman said.

The first piece of reform eliminated teacher’s tenure and restricted teacher unions to only bargaining for wages and benefits; the second rewarded teachers for taking on special assignments and for their schools for doing well on standardized tests; and the third planned to provide one laptop for every student in each district. As late Tuesday, all three reforms were being shot down by voters.

“People were rightly skeptical spending hundreds of millions of dollars on technology, which seems like a luxury given how scarce our financial resources have been for education for so long,” said Brian Cronin, spokesman for the No on Props 1, 2, and 3 campaign.