What Should You Do?

Like CPR or the Heimlich maneuver, Mental Health First Aid can prepare you for a crisis 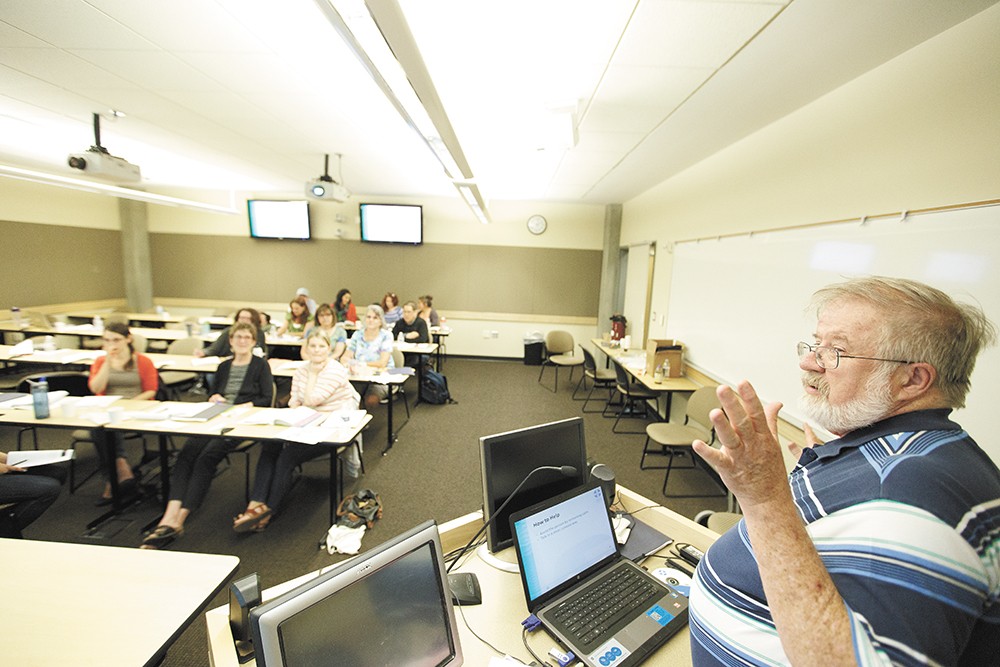 you press the palms of your hands hard and fast into his chest and begin CPR. Your dining companion is choking; you wrap your arms around her waist and give her the Heimlich maneuver. You know to reach for the bottle of aspirin if someone is suffering from a heart attack. You know to apply pressure to a wound to stop it from bleeding.

But what do you do if your son or daughter has become withdrawn and depressed? How do you help a neighbor you notice is talking to someone who isn't there? What do you say to a loved one who tells you she intends to take her own life?

Assess for risk of suicide or harm;

Give reassurance and information;

Encourage self-help and other support strategies.

On a Wednesday in May, in a basement classroom at Washington State University's Spokane campus, Murphy, the programs manager for Passages, a support organization for people recovering from mental illness, teaches Mental Health First Aid to a class of 16 people from varying fields — social services, advocacy, mental health and student affairs.

Murphy is one of the first instructors trained in Mental Health First Aid in Washington state. For the past five years he has been teaching, on average, a dozen classes a year at colleges, police departments, state hospitals and local churches. His classes are always full. Lately, there have been waiting lists to get in.

Throughout the course, Murphy, who has bipolar disorder, draws from his own experience as an "irritable manic" who would stay up for six days straight and avoid taking his medication before he checked into Eastern State Hospital in the 1980s.

"My big thing is to get people who are showing symptoms, or are in crisis, the help they need instead of being left on their own," Murphy says. "Many people see someone in crisis and they turn away and leave, because they don't know how to help them."

The course was invented in 2001 by Australian couple Betty Kitchener, a psychiatric nurse, and Anthony Jorm, a mental health professor and researcher. It has since been adopted in more than 20 countries around the world. Here, Mental Health First Aid has even received the president's seal of approval: In January 2013, in the wake of the mass shooting at Sandy Hook Elementary School in Newtown, Conn., President Obama endorsed the training program to help teachers and staff in schools identify signs of mental illness among students.

Bryan Gibb, director of public education for the National Council for Behavioral Health, which runs the American program, says the popularity of Mental Health First Aid has grown since it was first introduced in the United States in 2008. He estimates that more than 250,000 Americans will be trained in Mental Health First Aid by the end of the year.

Gibb says the mission of Mental Health First Aid is twofold: About one in four people in the U.S. will experience symptoms of a mental illness or substance abuse disorder in a given year. Yet, according to the Substance Abuse and Mental Health Services Administration, less than 40 percent of them seek treatment.

"So there's a lot of people who might benefit from treatment or interventions who don't have access to it," Gibb says. "It's far more likely you will come into contact with someone who's in emotional distress than someone who's choking on a piece of food."

Beyond preparing people for mental health emergencies, Gibb hopes the course will reduce the stigma of mental illness, which far too often discourages people from seeking help in the first place.

The eight-hour course covers a range of mental health problems and their risk factors, symptoms and treatment, including depression, anxiety, trauma, eating disorders, psychosis and substance abuse disorders. Participants learn the difference between mood and thought disorders. Through role-playing, they learn how to talk to someone who's suicidal or self-injuring; how to safely approach a person in the midst of a psychotic break; what interventions to use and which resources to contact for help. In one simulation, students don a pair of headphones and listen to an MP3 recording to get an idea of what it's like to hear voices.

"I wanted to educate myself more about how to differentiate between various mental health conditions and situations, so I'd know when it was appropriate to refer people to proper professionals," says Kathleen Werr, one of the course participants. Werr helps run Autistic Network of Unique Eccentrics, a local peer support group for autistic adults. At the training at WSU, she noticed some similarities between behaviors commonly associated with autism and symptoms of mental health crises.

"I need to know the difference between people just expressing frustrations and difficulties, and when they're in crisis," she says. ♦

If you're interested in taking a class with John Murphy at WSU Spokane, please email jmurphy@passagesfs.org for dates and information. Frontier Behavioral Health also is offering youth and adult versions of Mental Health First Aid training to the public on the following dates: Sept. 12 (adult), Oct. 3 (adult) and Oct. 13 (youth). The cost to participate is $25. To register for a class or inquire about the program, email tduncan@smhca.org.