A local artist on little black dresses and how so much of creation is about erosion. 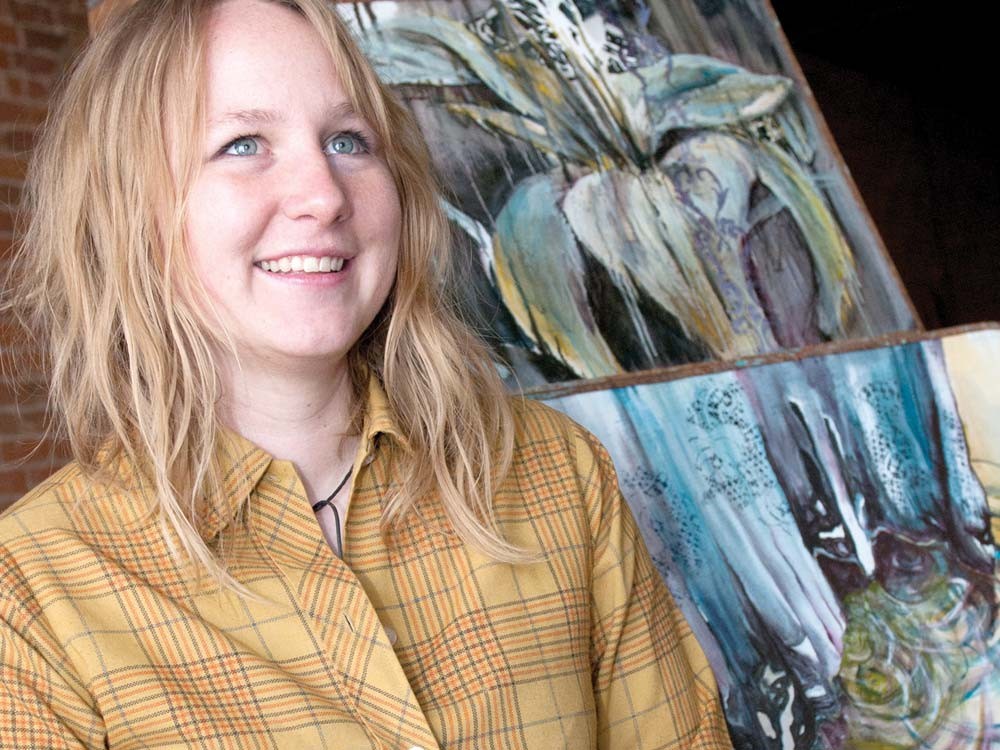 Amy Hunter
Cori McWilliams, with three paintings from “Lilly and the Dress”

It sounds like people having sex, but it’s probably just pigeons. “Maybe it’s pigeon sex,” the painter and sculptor Cori McWilliams suggests. They get in through the roof.

They nest in the rafters.

McWilliams’ art works with notions of creation and destruction, both mental and environmental, so it’s fitting that her artist’s studio — a disintegrating, two-story brick storefront across from Piggy Mart on Third Avenue — is, in her words, “condemnable.”

Everything breaks down, if you leave it long enough. But then it can become something else entirely. Like pigeon breeding grounds.

Her sculpture work, a selection of which ran at Saranac Art Projects in March, plays with that idea of inevitable disintegration by exploring the tense and often beautiful relationship between the structured world of man and the chaos of nature.

“River Foam” stacked blocks of man-made foam that McWilliams found in the Spokane river, tumbled by the current until they resembled large river rocks, into the kind of primitive sculpture kids make at a day on the beach.

For “Shift,” McWilliams painted onto a cylinder of driftwood a scientific representation of the way the Earth’s magnetic pole shifts every million years or so. She says she likes “taking human, scientific interpretations of what nature does and impressing it on natural objects.”

Working with found things is different than working with art supplies, she says. “The objects themselves have meaning you have to deal with.” As they’re broken down, that meaning changes. When art is made out of them, it changes again.

Four or five years ago, now, McWilliams’ mother bought her a dress at a garage sale. “She’s always picking things up for me,” she says. It was beautiful, but there was no way the simple black lace dress would ever fit her body (“It’s like size double-zero”), so McWilliams hung it in a tree. She watched it endure the seasons.

A few years later, in college, needing to make a video, she filmed the dress. She dipped it in water and the water turned yellow. She tried to wear it. “A coherent storyline never worked out,” she says, “but I loved the compositions and the color.”

A year after that, out of college now and feeling the need to paint, McWilliams took out the videos and made stills of pivotal scenes. Then she made paintings of the stills. The dress floating in a tub of water, water dripping off the hem, McWilliams herself trying in vain to zip it up.

There are ten paintings in all, collected into a cycle called “Lilly and the Dress,” which will hang at Far West through May.

The dress is no longer an object but a concept, the physical weight replaced by personal narrative. She says people ask her what the paintings are about. She responds, “Definitely not body image.” It’s something closer to a metaphor for the art itself.

“It’s the act of trying things out,” she says, “working on things until you don’t need to work on them anymore.”

Like the river eroding a piece of driftwood, this can take years. “You just sit there, and stare at them, and then decide” what to do with them, she says, whittling things down through “levels of abstraction” until you strike upon something that’s as simple as it can be.

This makes art itself a kind of erosion, McWilliams says, “It’s like the weathering of the mind.”