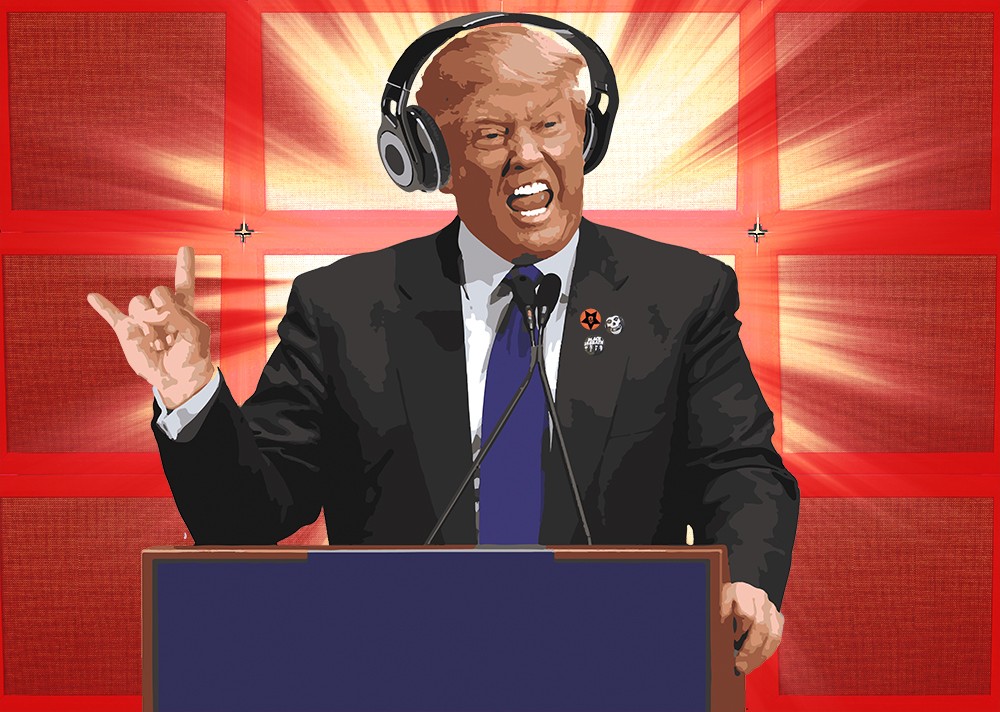 Dave Kelley illustration
Donald Trump, like other politicians, uses music to pump up his crowds at campaign rallies.

Of the entire pack of candidates once running for president,

only one man is left standing on the Republican side — Donald J. Trump. Throughout the past year, Trump has used quite the assortment of songs to flavor his raucous campaign events. With Washington's Republican primary swiftly approaching next Tuesday, we thought it would be fun to take a look at the music the presumptive GOP nominee uses to pump up his fans.

At the start of this month, about 4,000 people crowded into the Spokane Convention Center to hear Trump speak. During the hours that folks had to await his arrival, quite a few tunes were played over the event center's loudspeakers — one being the Rolling Stones' "You Can't Always Get What You Want," a song the iconic rockers had asked the candidate to stop using earlier that week. They're not the first artists to have trouble with Trump.

The now-defunct band was not amused and later posted on their Facebook page:

"While we do not authorize or condone the use of our music at this political event, and do ask that these candidates cease and desist from doing so, let us remember that there are things of greater importance at stake here."

Kicking off his campaign in New York last June, Trump used "Rockin' In The Free World," much to the chagrin of songwriter Neil Young, who asked him to stop.

Whatever Trump's name means to you (the tell-it-like-it-is savior of America, or the orange bigot with small hands), the truth is that most Democratic campaigns don't have the same issues that Republicans do. Even if artists didn't give Hillary Clinton or Bernie Sanders direct permission to use their songs, they often don't mind and don't complain.

So how much of a case do these artists have against Trump?

Some musicians have successfully gotten politicians they didn't agree with to stop using their work — Bruce Springsteen with Ronald Reagan, as well as Sting with George W. Bush — but some politicians have carried on, claiming they have obtained permission through royalty payments.

According to copyright laws, politicians are protected from most complaints by purchasing a blanket license from the two largest public-performance societies, ASCAP and BMI, which pay royalties to artists they represent. Where candidates (again, mostly Republicans as of late) get into trouble is if in using that song, it appears the musician supports the candidate in question. Then artists can sue under the federal trademark law for false advertising. However, it's up to the artist to press the issue.

Again, on the other side of the aisle, no one has taken issue with Sanders or Clinton using their work. Sanders has even gotten local indie acts — Tacocat and the Thermals, respectively — to play at his Seattle and Portland rallies. Katy Perry's "Roar" is a mainstay on the Clinton campaign trail, and the artist is a die-hard proponent of the former Secretary of State. Other relatively safe songs on Clinton's playlist include Kelly Clarkson's "What Doesn't Kill You Makes You Stronger" and Pharrell Williams' "Happy," none of which have drawn complaints. It's worth noting that during the 2008 presidential campaign, Barack Obama was asked to stop using the song "Hold On, I'm Comin'" by soul music legends Sam Moore and Dave Prater.

There's a reason that so many Republican candidates use pop country music in their campaigns — that's their wheelhouse. Many of the musicians in the American flag-waving genre vote Republican (except, of course, the Dixie Chicks), but there are other artists who Trump should probably fully embrace for his rallies and even ad campaigns.

First off, Trump should check out the small-time New York City singer-songwriter Toots Sweet, who wrote "Make America Great Again" just for him. Outspoken artists like Ted Nugent, Meatloaf and Lynyrd Skynyrd would also make great fits for the Trump campaign. Kid Rock supported Mitt Romney's candidacy four years ago, and Nicki Minaj supposedly has conservative leanings. Trump also has the blessing of Twisted Sister frontman Dee Snider, who made an appearance on Trump's own Celebrity Apprentice, to use "We're Not Gonna Take It." These are the types of artists who approve of Trump; he should stick with them. ♦