What We Eat When We Don’t Eat Turkey 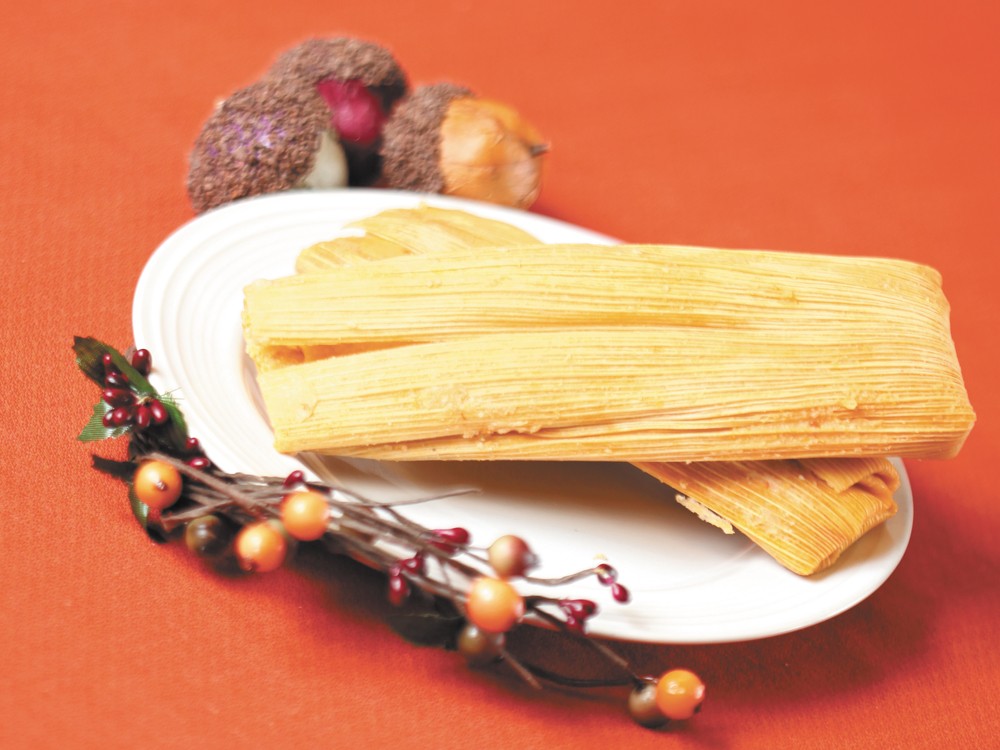 If you’ve ever been prevented from crossing the T.J. Meenach Bridge because a mob of turkeys ran, skipped or attempted some kind of half-winged hop across the roadway, then you might have wondered how anyone could even think of hunting and consuming such graceless creatures. Or, maybe, you started thinking about your Thanksgiving spread.

These wild birds are leaner than those stocked in supermarkets but just as edible, according to the Washington Department of Fish and Wildlife. Open season on turkey runs from Nov. 20 until Dec. 15, and, according to state game biologists, turkeys are “pretty abundant” in Spokane, Lincoln and Whitman counties. So, those looking for a fresh bird can legally obtain one throughout the Thanksgiving season.

But there are also plenty of alternatives for those of us not interested in partaking of the paradoxically fearsome (beaks and talons) yet comical (puffs of feathers) roadblocks.

Ximena Gomez, an employee at DeLeon’s Mexican Deli and Grocery, advises her customers to pre-order tamales for Thanksgiving and upcoming holidays. All three kinds: pork, chicken, and peppers and cheese, sell out quickly. The shredded chicken and beef are also popular. After confessing that I like a good Thanksgiving lasagna, Gomez admits that her family enjoys enchiladas and that they aren’t big on gravy and potatoes. So, who needs a turkey when you are surrounded by friends, family, shredded meats and lots of cheese?

Kum Sun Skindzier, a shopper at Asian World Food Market, would agree with Gomez on the importance of family. Her family gathers for the holiday and plays cards on Thanksgiving, all while in range of a table full of assorted treats. For the main meal there is usually roast beef or fried fish, but Skindzier also sets up a smaller table loaded, she says, with “many, many different kinds of things: rice cakes, yugwa [deep-fried grain-flour with honey] and vegetable pancakes, persimmon, pear, lots of fruit.”

Then there are those who might enjoy turkey, but eschew it on moral grounds. These are the Tofurkey-eaters, the grain-roast-noshers, the coconut-nog-drinkers. Monica Hampton, store manager at Huckleberry’s on the South Hill, ensures the stock is able to keep up with the demand while downtown, at the Main Market, manager Thomas Miller and buyer Jesse Cochran do the same.

These faux-turkeys are mere shadow stand-ins of a tradition that has sat on American tables since the days of Franklin Delano Roosevelt, whose 1941 Four Freedoms speech inspired Norman Rockwell’s iconic painting, “Freedom From Want.” You know this one: a family gathers eagerly around the table while grandma heaves a humongous platter upon on which rests a prize bird. The turkey in that image symbolizes American abundance.

What was considered abundant in 1941 pales by 2012 standards. Erin Pulley, a native Louisianan recently arrived to Spokane, explains that turducken (chicken inside a duck, inside a turkey) originated in her home state. She considers this abundantly layered meat dish a turkey because, well, it’s a turducken. Ham, apparently, is not traditionally symbolic of abundance.

“My husband once mentioned having ham for Thanksgiving and my mother said that wasn’t allowed,” says Pulley.

Pulley is not alone in following tradition. At Mariupol European Deli and Bakery on East Sprague Avenue, you’ll find jars of whole plum preserves with walnuts, pickled eggplant, smoked mackerel and packets of Austrian chocolates, but you will not find turkey. Don’t be deceived. Just because it isn’t on the shelves does not mean that members of Spokane’s Russian community don’t enjoy a plump turkey breast. Diana Karapeter, an employee at the market, has cooked turkey each Thanksgiving for the 15 years she has resided in the United States. She loves the mashed potatoes and all the other traditional fixings. Karapeter compares Thanksgiving to Zhatva, a Russian harvest celebration during which friends and community gather and share food, but in Russia a turkey dinner was rare, not to mention expensive.

Here in the U.S., turkey is still a luxury that many can’t afford. Captain Kyle Smith of Spokane’s Salvation Army expects to provide turkey dinners to 7,300 households (a total of approximately 10,000 people) who would not otherwise have a turkey dinner for Thanksgiving. On Tuesday, Nov. 20, a line will form outside the Spokane Arena. After the doors open, people will wait indoors for the opportunity to take home a traditional holiday meal.

Smith has been thanked often during his 15 years with the Salvation Army, but the instance he remembers most happened in 2009, when a woman came up to him and said that she couldn’t thank him enough. Because of this gift she wouldn’t have to explain to her kids why they were eating meatloaf.