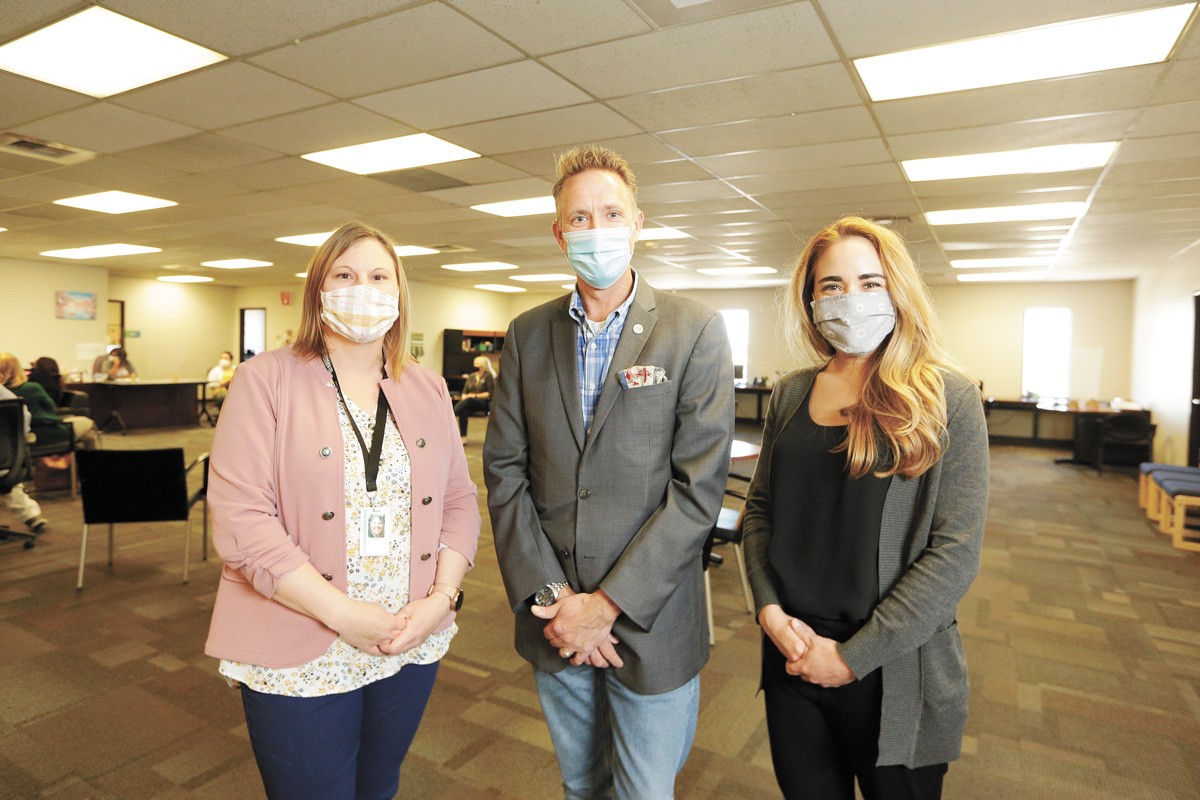 To be at the margins — to be homeless or nearly homeless — is to constantly be navigating mazes of social services agencies, forests of phone trees and labyrinths of bureaucracy to get the help you need.

But at the Spokane Resource Center, the idea was that all anyone had to do was walk through the door, and they'd have a personal guide to different services, whether that's energy assistance, resume help, or a closet full of professional clothes they could borrow for a job interview.

The Trump administration's Housing and Urban Development Secretary Ben Carson declared in 2019 that Spokane's facility, considered one of HUD's first EnVision Centers, was "helping to forge a pathway for a lot of other places around the country."

Eighteen different social service providers, including Catholic Charities, SNAP and CHAS Health, had representatives stationed at the center above the WorkSource employment offices on Arthur Street.

This month, the Spokane City Council is considering contributing $65,000 a year to the center, splitting a lease payment three ways with Spokane County and the Spokane Workforce Council, the agency that oversees the center.

But other council members weren't quite as confident.

"Yeah, I know the last year has been unprecedented, but I personally have not seen the data for the outcomes we were hoping for," Councilwoman Betsy Wilkerson says.

To hear the Spokane Workforce Council tell it, the Spokane Resource Center has been an incredible achievement, one that managed to adapt to the COVID-19 pandemic to serve thousands more than they had before.

But some others on the City Council wondered why, if the center has worked so well, it's received so little recent attention.

"They seem to be invisible," Councilman Michael Cathcart says.

"We started with a vision and a shoestring budget," says Dawn Karber, the chief operating officer of the Workforce Council.

The string, at least, was visible: When the center first opened to the public in March 2019, the only sign — "Spokane Resource Center" — had been hung up with a string and two paper clips.

They didn't have a copy machine or anyone at the front desk. They relied on spotty Wi-Fi for their phone service.

"The phones would cut out in the beginning," says Jen Morris, director of the Spokane Resource Center. "We would have to call people back."

Meanwhile, local social service agencies had to decide whether it was worth sending one of their limited staffers to the center.

"For most of the agencies, it was like, 'We haven't got someone really designed to be there,'" says Carol Weltz, director of community action at SNAP. At first, only a few agencies were represented and only for a limited number of hours a week, she says.

But while Catholic Charities found the location to be an effective place to help families facing upheaval or housing instability, Weltz says SNAP found it didn't work as well for another high-profile population: single, chronically homeless people. The setting, above an employment office, could be intimidating.

"We're dealing with a guy who's coming to our office with a shopping cart full of stuff. Maybe hasn't had a bath for a week," Weltz says. "And we want them to walk into a fancy-dressed WorkSource [office] and take an elevator upstairs?"

As Mayor David Condon's term came to an end in late 2019, his city administrator, Theresa Sanders, wrote a memo describing the Spokane Resource Center as only a "marginal success."

While nonprofits were located together in the same building, she wrote, they were not "coordinating/integrating services as was envisioned," and it wasn't clear whether the Workforce Council was the "appropriate group to lead this effort."

But by March 2020, Weltz and Karber say momentum for the organization had been growing. They'd pulled in more grant money, the phones had been upgraded, and a director was hired as well as someone to staff the front desk.

"We said, 'This is actually working,'" Karber says. "The center was full of people. You could feel the motivation and the morale."

She remembers seeing a woman walking down the hall beaming as she headed out for an interview in a suit she'd borrowed from the center's Clothing Closet.

But then the pandemic hit.

In those early days of the COVID lockdown, Karber says, she hit her "dark night of the soul" moment.


The premise of the center had been that anyone could just walk through the doors and get help. But the pandemic had literally closed those doors.

"We'd transitioned from a full center to one or two of us handing out boxes of food in the parking lot," Karber says. "The need in the community was so high, I wondered how we were going to help all of those that needed it."

"The thing that I saw that was amazing was the adaptability," says Anthony Singleton, a Spokane Resource Center navigator. "We brought it to the people, instead of them having to bring it to us."

That's meant personally driving to drop off hot meals or adult diapers for clients, he says, "or myself, being crazy, and going to people's houses and filling out paperwork."

The center went virtual, offering clients help almost entirely over the phone and the internet instead of in-person. Since some low-income people didn't have computers, of course, they let them check out Chromebooks. Last summer, the center even won a "SNAP Partner Appreciation Award," highlighting their ability to adapt to clients needs.

Despite their closed doors, the demand had soared.

"Who we serve is changing," Morris says. "We're serving another demographic of folks that we never saw before."

They were still helping homeless people, she says, but a lot more people were calling who lost their jobs and were worried about losing their homes.

The city of Spokane handed the center $2 million in rental assistance funds to distribute, and they used it to help 830 households struggling to pay rent.

They were more successful during the pandemic, Karber says. According to the Spokane Workforce Council, the center has served more than 6,500 people since the pandemic started, many times more than the year before.

Today, they're preparing another shift: They've been taking in-person appointments at the center since April. But on June 7, Karber says, the Spokane Resource Center plans to officially reopen its doors to walk-in clients.

Wilkerson, the city councilwoman, will be watching closely.

"It'll be interesting in how they knit this back together and get people to start showing up there again," Wilkerson says.

Wilkerson still has a lot of questions.


"Is the building as critical as it once was?" she asks. "Because we've all gone to different models of delivering services."

Also, is the location of the center, about a mile east of Catholic Charities downtown, in the right spot?

"It's down there, tucked away," she says, "It's not as accessible as people think."

Karber argues that it's a big advantage that they're in the same building where people show up for employment services.

But Wilkerson, the sole Black woman on the City Council, notes that she hasn't heard a groundswell of support in her circles for the agency.

"How are they really accessing communities of color and their needs to make all these services available to them?" she asks. "Anecdotally, I know folks of color are just going to the resources they know, but I don't believe it's the EnVision Center."

Karber points to a chart detailing the racial breakdown of their clientele: Nearly a third of the people they've served are non-White, almost three times higher than the non-White population of Spokane County. In particular, Karber credits a CHAS Health employee for bringing in a large number of people from the local Marshallese community to the center.

Still, even former City Council President Ben Stuckart says he's heard little about the Spokane Resource Center while in his roles as the director of the Spokane Low-Income Housing Consortium and chair of Spokane's Continuum of Care Board.

He says the conversations he's had have been more about connecting people with social services inside the homeless shelters, instead of at the Resource Center.

Karber says that the Workforce Council's marketing and communication manager is actively working on a strategy to help promote the Spokane Resource Center as it reopens.

"If community members are in need of additional information, we'd love to hear about it," she says.

"I think they focus on doing the work — they haven't been publicizing it," Weltz suggests. "The agencies know about it. If I can't get you in, 'What about the Spokane Resource Center — they can get you in today.'"

That was the case with Nez Perce tribal member Raymond Allen, a former construction worker who was at the center last Thursday looking to switch his career to social work. He was referred to the Spokane Resource Center by Excelsior, a child welfare program that's helped his 6-year-old son.

While the center has some skeptics, it also has its champions. Where the Spokane County commissioners in the past have seemed wary of leaping into social services partnerships, here they readily agreed to help pay for the lease.

"Every indication from my standpoint is that it's working," says County Commissioner Al French. "This is a successful program, and we want it to continue."

For her part, Wilkerson says she does support helping the Spokane Resource Center pay its lease for at least another year, to see if the benefits become clearer.

"It's a great space," Wilkerson says. "Maybe I'm not giving it a fair chance because I didn't see it when it was in operation." ♦

The original print version of this article was headlined "Revision Center"