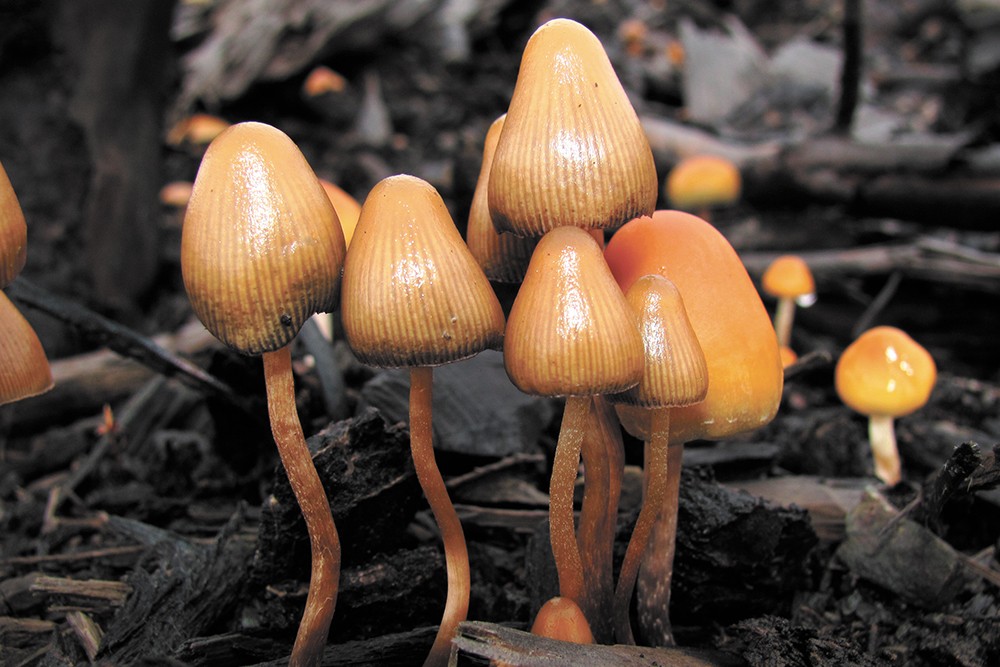 A type of psychedelic mushroom found in Washington and Oregon.

Are psychedelic mushrooms the next frontier for state-based drug policy reform in the United States? Activists in the West lobbying for decriminalization or legalization of mushrooms and other natural psychedelics certainly think so.

On the federal level, psilocybin mushrooms, as they're formally titled, are classified as a Schedule I narcotic on par with heroin and meth. But over the last few months, both Denver and Oakland have effectively decriminalized psilocybin mushrooms through both a ballot initiative and city council-approved resolution respectively. In Oregon, meanwhile, activists are campaigning to pass Initiative Petition 12, which would legalize psilocybin mushrooms for regulated therapeutic use by licensed providers.

Activists chalk up the recent string of successes to a variety of factors: New academic research illustrating the medicinal benefits of psilocybin mushrooms for treating medical conditions like addiction and depression; shifting attitudes on the criminalization of drugs in general; and liberals in highly progressive cities becoming bolder in the current polarized political era under President Donald Trump.

This isn't to say that there's widespread mass appeal for decriminalizing psychedelic mushrooms on par with support for marijuana policy reform efforts. The Denver ballot measure that made possession, consumption or production of mushrooms by people 21 or older a low priority for law enforcement in Denver passed by less than 2,000 votes. But in liberal bastions where voters are vehemently opposed to the dated war on drugs, such measures have a good shot, some activists say.

"The political climate in the U.S. is primed for passing these measures in the sense that the left has shifted further left, the right has shifted further right," says Carlos Plazola, board chair of Decriminalize Nature Oakland, the organization that successfully lobbied the City Council to pass a resolution effectively decriminalizing all natural psychedelics. "The left is taking a strong stance on things it feels strongly about."

Despite psilocybin mushrooms' illegality at the federal level, institutions like John Hopkins University, New York University, and the University of California Los Angeles have been pursuing research on the potential medicinal benefits of psilocybin, adding to an existing body of research. Studies from both John Hokpins and New York University that were published in the Journal of Psychopharmacology in 2016 found that psilocybin — the psychedelic compound in mushrooms — significantly decreased depression and anxiety among cancer patients for up to six months after a single large dosage of the compound. Similarly, a 2014 John Hopkins study indicated that psilocybin can help longtime smokers quit and avoid relapse.

"There's been a renaissance of research around psilocybin," says Armando Gudino, California policy manager for the Drug Policy Alliance, a national organization that advocates for the decriminalization of drugs. "Just in the last 10 years there's been well over a dozen psilocybin studies that have been completed and are ongoing."

"The arguments are certainly there in terms of the research on PTSD, depression, fighting the opioid epidemic," Plazola adds.

Regulatory changes at the federal level have also made it easier for researchers to study mushrooms. Last October, the federal Food and Drug Administration granted psilocybin therapy for treatment-resistant depression a "Breakthrough Therapy" designation, meaning that the agency recognizes its clinical value and can help expedite future research, development and review.

So in the aftermath of political success in Denver and Oakland, activists in Oregon are emboldened and energized. To some extent, so are those in Washington, where members of the psychedelic community are beginning to reach out to officials in cities like Seattle, and Port Townsend regarding decriminalization of mushrooms.

"Attitudes are changing across the country with regard to psychedelic therapy," says Tom Eckert, one of two chief petitioners for Oregon's psilocybin mushroom initiative. "We would like to see psilocybin therapy made available to those who are suffering and could benefit."

"Denver and Oakland have really paved the way," says Gudino with the Drug Policy Alliance. "At least [in] showing us two different ways that this can be achieved." ♦