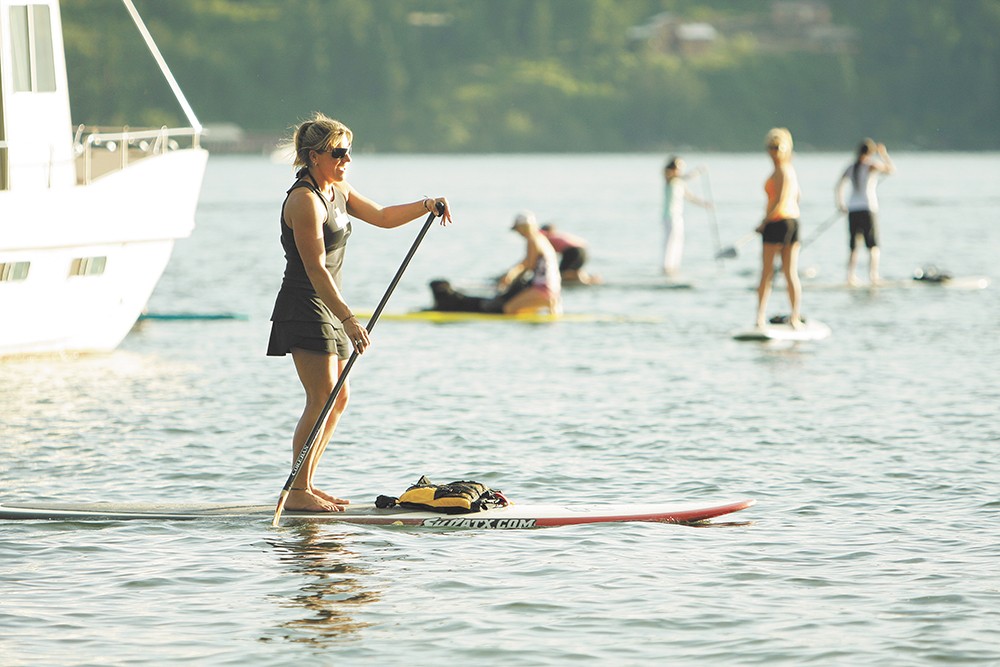 rapidly went from a niche coastal sport to a mainstream recreational activity. Today, the unwavering interest in SUP has marked a return to its roots (as a practice of South American and African fishermen), while allowing the sport to branch out.

Kym Murdoch opened the COEUR D'ALENE PADDLEBOARD COMPANY (512 Sherman Ave., CdA) five years ago after a visit to Hawaii, where she first encountered SUP. She estimates that her business "has more than doubled each year" since then. That growth might be due to the fact that the watersport now has something to offer nearly everyone, with its simple kit providing a basis for competitions, excursions, relaxation, fitness regimens and more.

Yoga and boot camp SUP classes lie at opposite ends of the fitness spectrum, yet both are proving hugely popular. SUP yoga benefits from its "serene" lake surroundings and the additional strength that comes with board balance. Boot camp SUP is naturally more intense. "It's sit-ups and push-ups and paddle sprints to get your heart rate up."

Novices and enthusiasts can take to the water on their own or as part of a group. Murdoch says that the lighted SUP night tours on Lake Coeur d'Alene, "where you see all the paddleboards lit up," inspires many first-timers to give SUP a whirl.

During the height of summer, another area SUP supplier, ROW ADVENTURE CENTER (202 Sherman Ave., CdA), has begun holding weekly SUP races starting from the North Idaho College beach. They also conduct leisurely "Paddle-n-Brew" tours down the Spokane River that begin and end at the No-Li Brewhouse. ♦