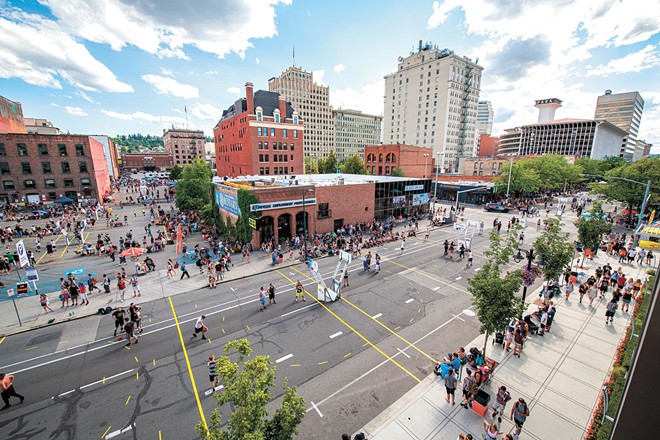 Erick Doxey photo
Spokane's streets won't fill for Hoopfest or Bloomsday this year, but you can still compete online.

For decades now, Bloomsday and Hoopfest have survived as outdoor events despite battling through everything from near-freezing temperatures to triple-digit heat. Mother nature has tried but never succeeded in stopping these events from drawing tens of thousands of people into the heart of Spokane.

Until this year, when it has become unsafe to draw even just 10 people — let alone tens of thousands — into close proximity.

"We plan for weather, we plan for if something bad were to happen," says Hoopfest Executive Director Matt Santangelo. "We did not plan for a pandemic. That's not in the crisis management plan that we work from."

They wound up learning how to plan for a pandemic on the fly. Initially, both organizations decided to postpone their events until late summer, hoping things would get better.

"This is our 44th race year, so we have 43 years under our belt of putting on one of the world's premier road races every first Sunday of May," says Bloomsday Race Director Jon Neill. "For us to deviate from that schedule was a big deal."

The act of simply rescheduling these events wasn't easy to begin with, and it was just the tip of the logistical-nightmare iceberg. Like practically every other business in the country, Hoopfest and Bloomsday then had to navigate an unsettled world of guidelines, mandates and requirements.

"We spent so much time trying to understand the ever-changing landscape," Santangelo says. "How could we be compliant in Phase 3? What does Phase 4 look like?"

Bloomsday officials spent the summer working towards what seemed like a feasible situation in Phase 4, even if it required distancing and masks, Neill says. "Once we found ourselves where we are now, locked in and spinning here in Phase 2, we knew that there would need to be a new, alternate plan for us to be able to put on our race."

For both, the alternative plan wound up being virtual events. Bloomsday went with a program allowing participants to run any 7.46 mile course of their choosing during the weekend of Sept. 18. Hoopfest partnered with athletic training app HomeCourt to create a series of challenges and contests for participants to complete on their own over the weekend of Aug. 20.

In the coming months, when the iconic player and finisher shirts start popping up on people around town, it may seem like 2020 wasn't all that different than years past. In that way, Spokane is getting Hoopfest and Bloomsday, albeit a unique version of each. But neither Spokane nor the organizations are getting the usual benefits.

These massive community events are deeply tied to many elements of our community, Neill says. "The process of moving Bloomsday from the spring to the fall and coordinating that with city leadership, and along with our sponsors and the hospitality community, the convention center — really with the entire city infrastructure — was a humongous undertaking."

Hoopfest alone brings in nearly $50 million to the local economy annually over the course of, essentially, just two days. This year, though, there won't be hotels packed with visitors or snow cone vendors on every other street corner. There won't even be as many people playing basketball.

When Hoopfest announced it was going virtual, players already registered were given the option for a refund. Unsurprisingly, Santangelo says, most have gone that route. Not only will these events be unable to bring in as much money to the local economy as normal, they're bringing in less for the organizations as well.

"It's a funky business model," Santangelo says. "At the end of the day, we're a small business. We've got payroll, we have rent and we have technology. In our case, we're a nonprofit. We don't have a huge war chest."

Two long-running, vibrant community events that are, at their core, small businesses. And they're feeling the pinch just like everybody else. Like restaurants that have switched to takeout, they've had to look for other sources of income to stay afloat. Hoopfest has seen an increase in retail sales, which Santangelo attributes to people wanting to support the organization however they can.

Perhaps that shouldn't be too surprising. The Spokane community is a big part of what has made Bloomsday and Hoopfest into the premier events they are today. Spokanites have been with them since the beginning, and they're still there now.

"We're competitors just like everyone else in the basketball world," Santangelo says. "We're going to find a way but we need good teammates just like in any team sport." ♦

The original print version of this article was headlined "Virtual Reality"