When people learn they might lose their home, SNAP is ready to try to prevent foreclosure 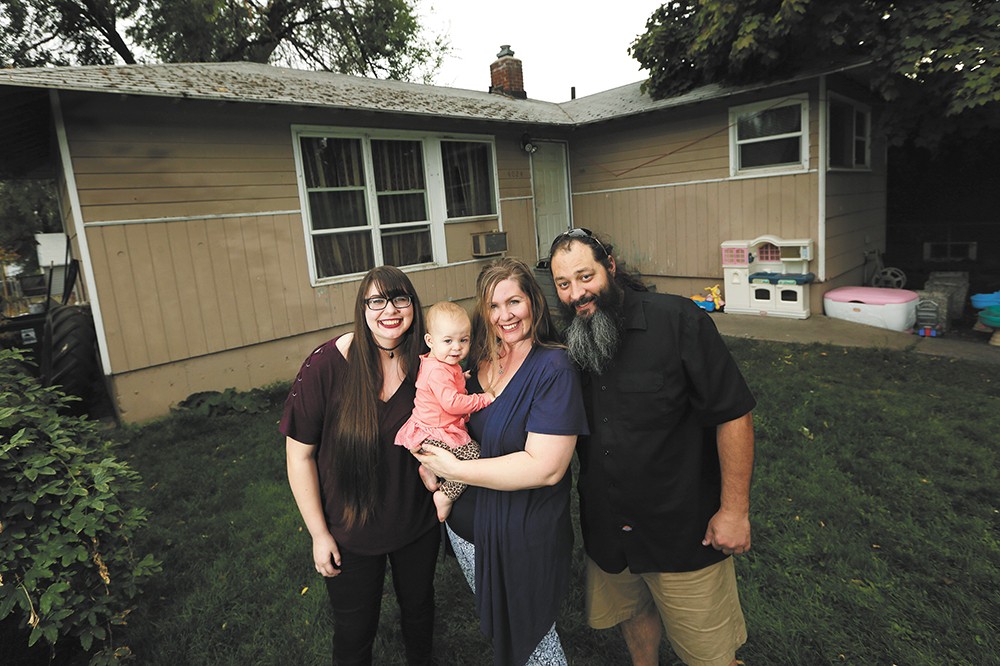 Young Kwak
FROM RIGHT: William and Autumn Nixdorf, with daughters Avalynn (1) and Haley (17) in front of the home they saved from foreclosure.

Looming foreclosure fell on the Nixdorf family as it does for many: First, William Nixdorf was injured at work, then after a few months out of commission on workers compensation pay, he was fired.

Then one time when the couple sent in a check, it was returned in the mail. It wasn't for the full amount due. Multiple checks afterward were returned uncashed. The mortgage company seemed unwilling to speak to them at all anymore.

They received notice that they might lose their home.

"I was pregnant at the time," Autumn Nixdorf says. "I thought we were gonna be homeless with a brand new baby."

But then someone told them SNAP (Spokane Neighborhood Action Partners) doesn't just offer help with utilities and services for the homeless, the organization also offers financial services, including housing counselors who can help fight foreclosures.

After getting paired with housing counselor Dale Raugust, and paying a $300 fee for a mediator, the couple was able to strike a deal with their mortgage company that both lowered their monthly payment and allowed them to start paying again. After a three-month trial period where they had to make each payment on time, the deal was sealed, and the couple has been able to remain in their home, south of Hillyard in northeast Spokane.

"We were ready to give up and just walk away, but I'm so glad that we didn't," Autumn Nixdorf says.

Every month, several Spokane County homeowners are given notices of default letting them know if they don't pay up soon, their home will be foreclosed on, and dozens of others are told their homes are going to be auctioned off, essentially their final warning in the foreclosure process.

While 31 Spokane County homes so far this year have received judicial notices of default, the actual number is likely much higher as Washington doesn't require those notices to be made publicly, according to data compiled by ATTOM Data Solutions, which maintains a database of property information nationwide. Notices of sale, which are public, have gone to 265 Spokane County homes, ATTOM data shows.

The sooner a property can get into mediation during the process, the better, but even after a homeowner is told their house will be auctioned, there is still a short window of time in which a housing counselor or lawyer can request mediation for them.

That's where the team of housing counselors at SNAP can help. And while there are fees for the mediator, SNAP's services come free.

The organization helped with 94 foreclosure mediations in 2017, and nearly 300 between 2015 and 2017, the only years that complete tracking data is available. That's translated to hundreds of people whose lives were not upended and who didn't wind up homeless.

"We genuinely care about people and our clients," housing counselor Raugust says. "We want to see them succeed."

Raugust has been with SNAP since 2011, and in that time, he's seen many stories "of survival, betrayal, redemption and renewal." At any given time, he's carrying about 100 cases, closing out about 15 a month and getting about 15 new ones.

The year he started at SNAP, the Washington State Legislature had passed the Foreclosure Fairness Act, ensuring everyone the opportunity to try to avoid foreclosure whenever possible by funding housing counselors like Raugust with fees the financial institutions have to pay whenever they record a notice of trustee sale.

While there were more counselors after the act first started, when those fees were collected with the earlier step of the notice of default, Raugust says he and his fellow counselors at SNAP are now four of only 24 such counselors throughout the state, and the only ones in Eastern Washington who work on mediations. That means Raugust sees clients from Yakima, the Tri-Cities, Wenatchee, Colville and more.

"I'm just as busy as I was in 2011 or 2012, and I think maybe we're just getting the word out better," he says, because "if you look at the statistics statewide, the number of foreclosures is way down."

Most of the people Raugust sees are facing foreclosure after losing their job, having unexpected medical costs or health issues, or having another unexpected life change.

For Roger Casselberry, it was losing his job as a surgical technician, then going through a separation and subsequent depression that led him to fall behind. After Child Protective Services placed his kids with him, he knew he needed to get things figured out.

"First, when you go through the pressure, it's like, 'I don't care,'" Casselberry says. "Then you start coming to your senses and realize: I've gotta start fighting. That was a huge thing when the kids were dropped off here."

He heard about SNAP and got financial counseling, with help figuring out his budget. Through mediation, he was able to restart payments on his mortgage and stay in his Hillyard home.

Everything hit about three-and-a-half years ago, Casselberry says, and now, it's all looking much better. He's got a new job he loves, and his payment plan, while slightly more expensive, is manageable.

"I'm enjoying life right now, it's kinda fun," he says. "I'm glad the program's out there, because once in a while you do need some help to help you stay on your feet."

Not every story is a success, though, Raugust says. Some people have gambling issues. Others won't get a deal worked out with their bank for various reasons.

One woman he tried to help was a registered nurse who'd been making $60,000 a year, and had raised three children. Then she was attacked one night on her way home from a party when a man beat and raped her. By the time Raugust met her, she was several months behind on her mortgage and collecting aluminum cans for money.

"She was mentally impaired by her attack and despite my efforts to get her help in the form of counseling and medical/psychiatric treatment she never responded and never followed through with appointments," Raugust writes in an email. "Eventually her house was repossessed and she ended up on the streets. It has been three years since all of this happened and I think about her often and wonder whatever became of her."

Even though he sometimes faces great sadness, Raugust says working at SNAP has been one of the greatest blessings of his life.

And his clients feel the same way.

Jon Hook says when he and his wife were facing foreclosure on their Airway Heights home after he had emergency gallbladder surgery and lost several days of work at his commission-based job — "no work, no money" — SNAP was not only available to help, but actually felt welcoming.

CORRECTION: This article was updated Oct. 1, 2018, to clarify information on the number of Spokane County homes that have received notices of default this year. It previously stated that 31 homes received them, but that number only reflects judicially filed notices of default, while the majority of Washington state foreclosures are non-judicial and don't require that notice to be public.