When relaxing without pretense is simply too stressful 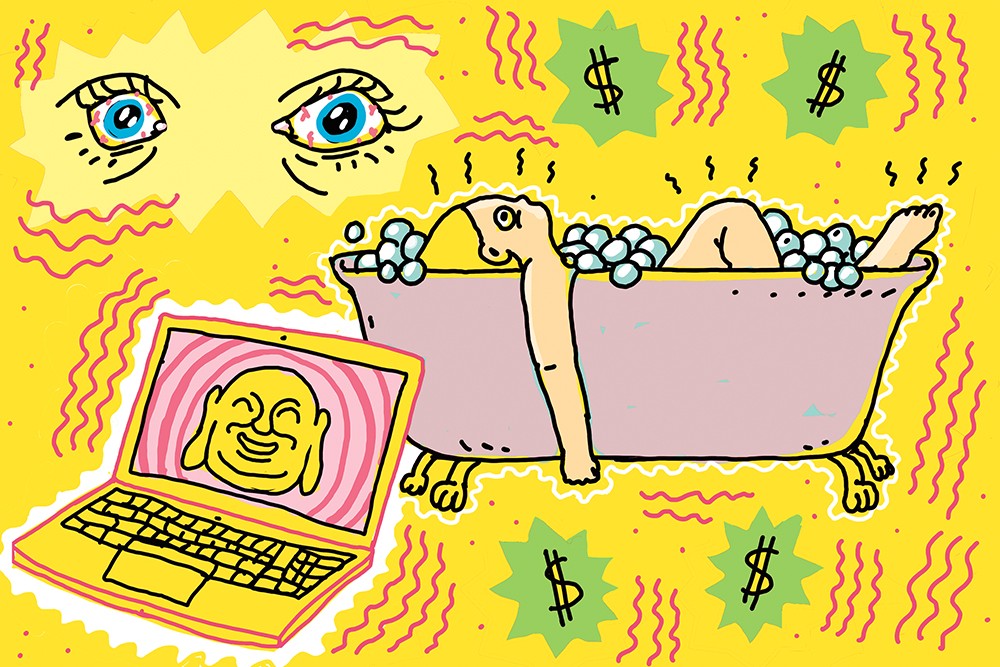 While bingeing a show on Netflix called How To Live Mortgage Free, I heard a young woman, describing the deck of her newly built tiny home, which had a view of an expansive yellow field, say, "You can sit out there all day. Just let the day go by." She said it with the implication that it would feel pleasant to sit on a deck all day and do nothing but watch time come and go. Maybe it was her British accent, but it struck me as a very annoying thing to say. Or maybe wise.

I wake up each day with manic dread about how I'm going to fill the hours, what I'm going to do that I can label as "productive," some skill I can hone, some task I can accomplish, some small dollar amount I can connive from someone. A day spent idly sitting on a deck would be a day filled with anxiety for all I was failing to do. Even when I do manage to spend a few hours sitting in the sun or walking through a park, it is in an effort to Relax or possibly to Exercise, or some other goal I can rush to accomplish.

As I was bingeing this show, I was latch-hooking a rug that I was making as a gift, a multitasking endeavor that required I watch Netflix in a window that took up only half my screen, so I could see the latch-hook pattern I'd made displayed on the other side of my screen. I was also mentally creating imaginary to-do list items that might be fulfilled by this activity. Did bingeing Netflix count as Relaxation? Did turning off Age Gap Love in favor of something less emotionally distressing count as Self-Care? Did watching a home design show count as Education? Did sitting in this position count as Yoga? Did attempting a large-scale latch-hook project when I haven't latch-hooked since elementary school count as Personal Growth? Did it count as Artistic Expression? Since I was making it for someone else, did it count as Social Engagement? Did it count as an Act of Love? Did it count as Defeating Time's Determination to Suck Me Dry by Filling Life with So Many Goals That I Barely Noticed Time Passing At All Until It Was Mostly Gone? Did all this self-awareness and goal-orientation count as Thriving? Did it count as Living My Best Life? Did it count as Fulfillment? Did it count as #Squadgoals?

Just let the day go by, echoed in my Fulfilled and Thriving head. Stupid tiny-home girl, so above it all. I looked at my online to-do list to see if there was anything I could check off indignantly, but there was not.

The girl had wanted a bath installed in her tiny home and had been told "no" so many times during the episode you just knew she would end up with one. The show people surprised her with a mobile bathtub under a counter in the kitchen and told her she could pull it out to the deck and take a bath there when she wanted to.

I wanted to yell at these people and tell them that something that looked like a bathtub didn't necessarily make it one. A true bathtub required a bathroom, and privacy, and running water. This was, at best, a gorgeous bespoke kiddie pool. Words have meaning, and if we disregard that meaning, society will be thrown into chaos.

I noticed my blood pressure rising, and realized this was not the Relaxing Self-Care I desired for the evening. It wasn't even Creative Multitasking anymore, as I had stopped latch-hooking to gawk at these utter morons. I turned back to Age Gap Love and felt immediately relieved. ♦