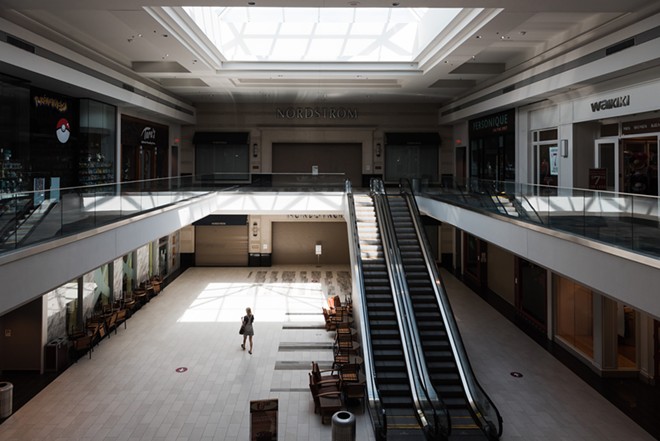 Carter Johnston/The New York Times
A shopper inside Barton Creek Square on the day that operator Simon Property Group reopened the mall, despite that many of it’s stores remained closed due to concerns about the coronavirus, in Austin Texas, May 1, 2020. Retail sales fell 16.4 percent in April, according to the Commerce Department, by far the largest monthly drop on record — a drop of 8.3 percent in March, was the previous record.
By Ben Casselman and Sapna Maheshwari
The New York Times Company

The coronavirus pandemic dealt another crushing blow to retailers in April. Now the question is what the sector will look like as the economy reopens — and how much permanent damage has been inflicted.

Retail sales fell 16.4% last month, the Commerce Department said Friday, by far the largest monthly drop on record. That followed an 8.3% drop in March, the previous record. Total sales for April, which include retail purchases in stores and online as well as money spent at bars and restaurants, were the lowest since 2012, even without accounting for inflation.

Restaurants and bars lost half their business over two months. At furniture and home furnishings stores, sales were off by two-thirds. At clothing stores, the two-month decline was 89%. Increased sales from online retailers didn’t come close to offsetting the downturn elsewhere.

April could prove to be the bottom for sales. The March figures were helped in part by panic buying and stores were generally open for the first half of the month. Most states have begun to lift barriers to commerce and movement, and many economists expect spending to rise in May as people venture out.

But in contrast to the nearly vertical drop, any rebound is likely to be gradual. Big states like New York and California remain largely under lockdown, and businesses face significant restrictions elsewhere. Even as businesses reopen, there is no guarantee that customers will return in numbers previously seen.

Surveys show that many Americans still fear the virus and are wary of crowded places.

Even if Americans feel comfortable returning to stores, they may not have as much money to spend, since millions have lost their jobs.

“Consumers are definitely feeling anxious about the future,” said Jay Sole, a retail analyst at UBS.

J. Crew and Neiman Marcus have filed for bankruptcy protection, and other big retailers like J.C. Penney Co., which employs nearly 85,000 people, are expected to follow.

Small businesses are being hit even harder. In a survey released by the Census Bureau on Thursday, nearly 90% of small retailers reported being hurt by the pandemic and few said they expected a quick rebound.

Sole anticipates 100,000 store closings by 2025 as the pandemic accelerates the shift to online sales, according to a recent report, with the biggest cuts in apparel, consumer electronics, home furnishings and groceries.