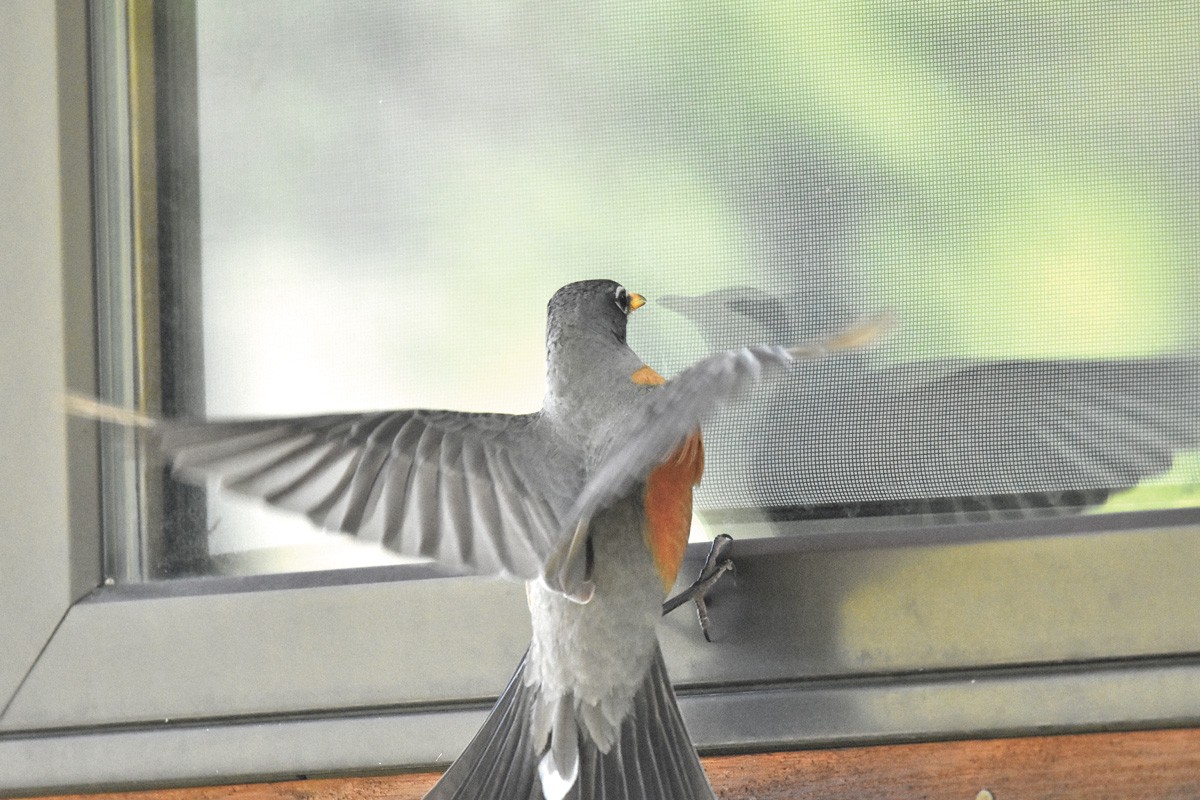 Have we all become confused little birds?

A robin has taken up residence on my family's car this spring. We call him Mr. Poopy — or more colorful names if the kids aren't around — because that is what he does: bops from the mirror to the roof, puffing out his feathers and pecking at the metal, pooping.

After several exasperated car washes, I finally Googled the problem. Male robins tend to see themselves in vehicles' side-view mirrors, think they've spotted a rival and release the goopy floodgates to scare that jerk away.

We tried covering the mirror with a bag. Soon, there was Mr. Poopy again, fighting with the "other robin" in the paint. No matter what we do, he keeps finding a new reflection: in the doors, in the windows, in the tiny shiny patches on the roof rack. In Mr. Poopy's world, there are enemies everywhere.

I thought of Mr. Poopy a few days ago, when a friend asked, "How are we going to fix our town when everyone has to see each other in person again?"

I knew exactly what she meant. Our small town has never been free of jolts of public disagreement, but the volume seemed to turn up in the past year, especially in virtual spaces.

As in so many towns, the comments sections of local news organizations turned into boxing rings. People used social media to air every grievance, shouting from the digital rooftops things they'd never say to someone's face. I'm guilty of participating in it — feeling the rush of righteousness as I pop off at a commenter, knowing I likely won't see them at the coffee shop anytime soon (and if I do, I'll be hiding behind my mask and mop of pandemic hair).

People have been sounding the alarm for years on how the internet can hurt communities and foster hate and extremism, but the concern has become more urgent during the pandemic. In a recent Atlantic article, two members of Johns Hopkins University's SNF Agora Institute contend that social media as it exists today promotes conspiracy thinking and mob mentality "in a world defined not by friendship but by anomie and alienation."

"Instead of entering a real-life public square, [Americans] drift anonymously into digital spaces where they rarely meet opponents; when they do, it is only to vilify them," they write.

In other words: On the internet, we're like Mr. Poopy. All alone, seeing enemies everywhere.

When my friend asked me how to fix our town, we agreed we didn't really know. But we knew it had to be rooted in remembering that our neighbors are more than who they might appear to be in the comments section.

This doesn't mean shutting up and only saying nice things. Kindness, fairness and justice take work, and even the most strongly built consensus is still going to leave people unhappy. But we have to resist the internet's focus on impersonal "debate" and posturing for faceless crowds. We have to push back against the ways social media make us feel like something is always wrong, like problems can't possibly be solved, like all we can do is scream at each other (or, well, shit on each other).

Breaking our terrible online habits while reinvigorating our in-person connections will be essential in the coming months. I'm starting with myself — spending less time on social media and focusing on connection when I'm there, stepping away when I feel angry, asking how I can address problems by taking constructive actions rooted in loving my neighbor.

The Atlantic writers advocate for reenvisioning the structure of social media (and their insights are totally worth reading in full). I've also seen amazing ideas for building community, online and in person, right here in the Inlander, in "27 ways to make the Inland Northwest an even better place to live," Edmundo M. Aguilar's column about radical love and CMarie Fuhrman's column about the power of stories to create empathy.

As our communities contend with illness, violence and loss, we have a choice. We can engage each other in ways that honor our shared humanity, or keep pouring out our worst impulses like confused little birds, raging at the image of ourselves. ♦

Tara Roberts is a writer and college journalism adviser who lives in Moscow with her husband, sons and poodle. Her work has appeared in Moss, Hippocampus and a variety of regional publications. Follow her on Twitter @tarabethidaho.

The original print version of this article was headlined "Living in Mr. Poopy's World"