Where are all the Children? 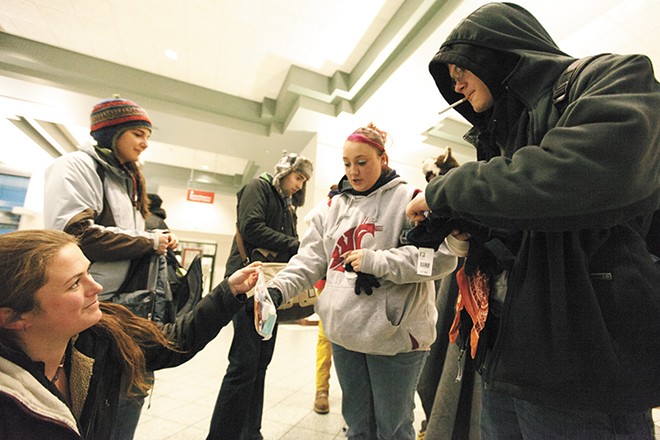 STA Plaza downtown is packed. Outside, the temperature has dipped below freezing. Inside, it's toasty and crowded. People mill about, wearing coats and hats, hoisting bags on their hips, dragging suitcases behind them. They eat pretzels and pizza, buy lottery tickets, wait for their ride home.

"Boss lady! Boss lady! Food!" A girl, no older than 15, dressed in black from head to toe with pink stripes in her hair, comes bounding down the escalator, arms wide, giggling.

All the kids at the plaza have street names. Carletta Gaston's is "Boss Lady" and everywhere she goes, people recognize her.

Gaston rummages through her bag, pulling out gloves and hand warmers, but the girl just wants water and candy. Gaston has long, auburn hair, perfect skin, a dusky voice and a certain swagger that belies her age. She's only 20, but she could easily pass for 30.

She's at the plaza working for YouthREACH, a newly restored street outreach program that connects homeless youth with resources. In the past 10 days, Gaston and two other outreach workers from YFA Connections and Crosswalk have served more than 140 different kids, handing out bottles of water, socks, hats, gloves, Halloween candy, snacks, deodorant, toothpaste and condoms.

For years, YFA Connections and Crosswalk ran a robust street outreach program, providing resources to homeless teenagers, until they lost a federal grant in 2011. Now with new funding from United Way, they're back roaming downtown and combing for kids in parks, alleys, under overpasses, at the mall, skate park and the bus plaza.

Morgan Belveal, a case manager at YFA and one of the outreach workers, keeps a binder with multicolored tabs. He tracks the number of new kids they meet, the familiar faces, what they give away and where they do it. He charts their course in neon highlighter and maps the hot spots where they've met groups of kids. Their job right now is to gain the trust of these kids, build relationships and search for trends in the data. If YouthREACH is going to last, they'll need funding, so they have to prove that what they're doing is important.

Gaston's presence in the group gives them street cred. She knows most of these kids. She can relate to them. Three years ago, she was one of them, smoking around the corner of STA Plaza, loitering outside the Olive Garden, sleeping in alleys, looking for a free meal.

They ask her for advice. They want to know how she kicked her drug habit, how she got off the streets.

Gaston was 8 the first time she was homeless. Her family was evicted from their house. The front door was padlocked, but they climbed inside through a window and lived like squatters for months. They stole electricity from the neighbors using an extension cord. For running water, they had a hose.

Gaston's mom was an addict. She used needles. She got Hepatitis C. ("She told me she got it from eating bad meat," Gaston says with a laugh.) She couldn't hold a job for longer than three months. They lived with a relative until they were kicked out, then at the Salvation Army family shelter and low-income housing in the Valley until they were evicted from there, too. Gaston was 14 when her mom told her she couldn't take care of her anymore. While her mother took refuge in Hope House, Volunteers of America's women's shelter, Gaston, the youngest of her siblings, started going to Crosswalk and sleeping outside.

The path to the underside of the Maple Street Bridge is strewn with autumn leaves and twinkling shards of glass. "Watch your step," Gaston warns. "There could be poop."

Beneath the bridge, Gaston shines a keychain flashlight where concrete meets cold, damp soil. A man is wrapped in a sleeping bag. His face is flushed and smeared with dirt. His voice is shot from cold or whiskey. A lump of blankets rests beside him. They can't tell if it's a body or if it's nothing. She asks him if he needs anything. He asks Gaston if she has a sandwich.

Young Kwak
Carletta Gaston gets supplies for her outreach efforts.

"Have you noticed any kids hanging out around here? No?" Gaston asks. "I don't have any sandwiches. But you want some hand warmers or something? It's pretty cold out here."

Technically, with its grant money, YouthREACH is only allowed to serve homeless kids and teenagers. This man is in his 30s or 40s. One of the hardest parts of the job is turning away people they know they could help with a pair of gloves or some snacks.

Gaston has slept under this bridge before — many times as a last resort. "The bridge is freezing. You do not want to sleep under the bridge," she says. Everywhere she goes holds a memory from her past. She points out places where she's slept, huddled with other kids to keep warm, in a basement, on a roof, or beneath an overhang of an elevator entrance. In the winter, one of her favorite spots was inside a dumpster at Domino's on Third. "It always just had cardboard in it," she says. "It was a good dumpster."

One of the worst parts about being homeless — besides the cold, the hunger, the powerlessness, the cops who sweep your corner of the city at sunrise and kick you out half-awake with everything you've got strapped to your back — is the filth. Unwashed hair. Clothing that sticks to your skin and takes the shape of your body.

Gaston was the "dirty girl" in school. Her classmates didn't like her; neither did her neighbors. No one knew she was homeless. At 8, she started skipping school. At 10, she was drinking and smoking. At 12, she had moved on to harder drugs. She chopped off her hair, dyed it black, pierced her nose, told people she was 13 and ran in circles with teenagers.

Her wake-up call came when she was 16. Alone and high, Gaston was hitchhiking to Spokane from Scotia, near Newport, when an elderly couple picked her up. They lectured her all the way back to Spokane, and she was bawling in the backseat.

"I know people who've been down here for 10-plus years," she thought. Hopeless, depressed, haggard from years of heavy drug use. "That's not gonna be me."

Beyond the railroad bridge at Maple and Second, a young man is passed out on the sidewalk, supine, limbs outstretched, his head planted in the bushes. Near his boots, a small cardboard sign reads "HELP" in red capital letters.

Gaston jogs over to him.

"Dick!" she hollers. "You alright? You need anything? Are you OK, Dick?" She drops her bag and kneels down beside him.

"I f---ing hate people," he mutters through his scarf, still motionless. Cars whiz by.

As he comes to, adjusting his hat, he knocks Gaston's 16-ounce Red Bull out of her hand. It spills on his face.

Dick says he's fine. Gaston offers him the rest of her Red Bull. From the sound of it, he was either knocked out or pushed around. Dick's only a year older than Gaston. She's known him since she was 15. Even before tonight, she worried about him. "[He] just thinks nobody gives a shit about him."

"Just wanted to make sure you were alive, dude. You scared me. Ugh," Gaston says.

She pulls a bottle of water, hand warmers, socks and bag of peanuts from her backpack and hands them to him. She gives him a hug, and he wraps his mismatched gloves around her.

Gaston was 17 when she found out she was pregnant, and she knew it would change her life. By then, she'd stopped doing drugs, finished her GED at Crosswalk and was preparing to go to Spokane Community College. She wanted to take classes to work as a certified nursing assistant or in a plasma center. With a baby, she and her son's father could get off the streets and move into a place of their own. And they did.

It's hard sometimes for Gaston to see these kids. Some nights, after tromping across broken glass and cigarette butts, through her old haunts, handing out gloves to shivering kids, asking them what they'll do when they turn 18, Gaston goes home and cries. Her goal is to get another part-time job, so she can pay for the rest of her classes. She wants to get a bachelor's in social work, so she can work at Crosswalk.

"I like to be there for them. Just let them know somebody actually cares about them," she says. "That's what I remember: When you're homeless, you just think that nobody cares about all the kids down here. But they do. I do." ♦