Where Are All The Doctors?

Providing care when shortage is the new normal 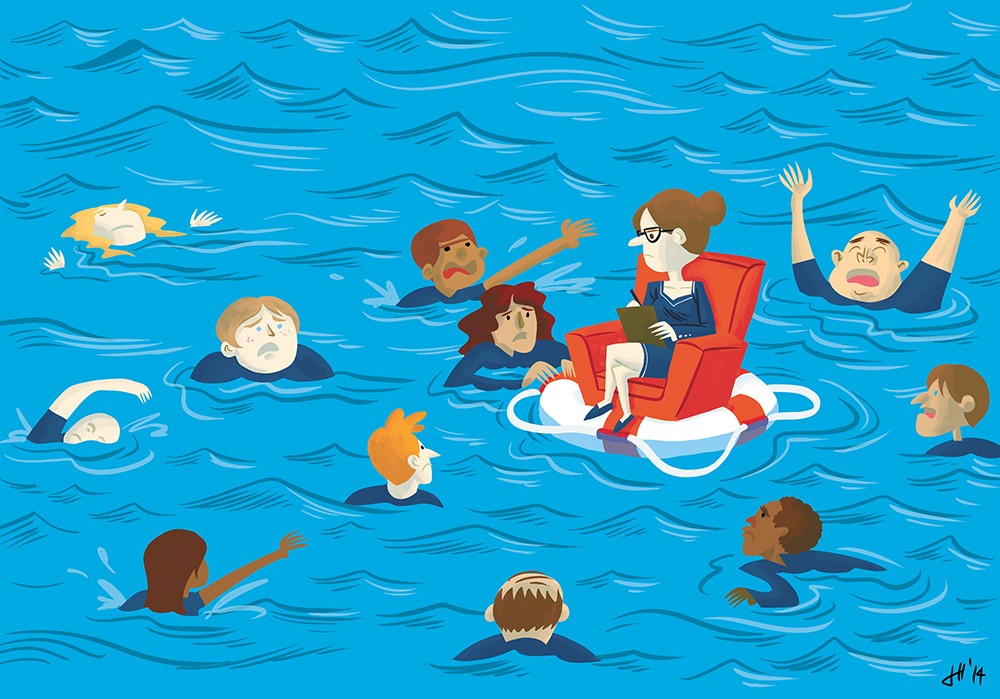 "I can open more beds, but if I don't have more psychiatrists, what's the use?" says Kamal Floura, medical director at Eastern State Hospital, where he counts five unfilled vacancies for psychiatrists.

Nationwide, about 30 percent of people live in areas designated by the government as having insufficient mental health care providers, determined by the ratio of psychiatrists to population (shortage areas have more than 30,000 people per psychiatrist). Kootenai County and parts of Spokane County are designated shortage areas and the city of Spokane is considered a shortage area for low-income and homeless people. Between the two states, 80 mental health care practitioners are needed to remove the designations. That's on top of the nearly 300 more primary care providers the states need.

The problem is widespread, but especially dramatic among psychiatrists, who can prescribe and manage the medications given credit for allowing many with mental illness to live in the community instead of in hospitals. Psychiatrists are aging — the portion of psychiatrists who are 55 and older is about 15 percent higher than the average among other types of doctors — and few are ready to replace them as the number of medical students specializing in psychiatry dwindles.

Area psychiatrists say the profession suffers from some stigma and the fact that, compared to other specialities, it's among the lowest paid. Floura says he's seen psychiatrists at Eastern, one of Washington's two state-funded adult psychiatric hospitals, take jobs at Sacred Heart or the VA Medical Center simply because the pay was higher, sometimes by as much as $80,000 a year.

"You have gone to medical school. You have student loans, this loan, that loan, and you have spent 10, 12 years of your life coming to this point," he says. "You want to be rewarded for something for which you did the hard work."

Along with increased pay, offering multiple levels of medical education is a way to attract psychiatrists, says psychiatrist and Washington State University professor Matt Layton. Doctors are likely to stay in the place where they completed their residency, the in-hospital training done after medical school. Yet despite estimates that the region has a higher rate of serious mental illness than the rest of Washington state, the count of psychiatry residency slots in the area is dismal. Central and Eastern Washington offer less than one psychiatry residency slot for every 100,000 people, compared to a national average of 23 slots per 100,000 population and a ratio of 18 per 100,000 on the western side of the state, according to a 2011 University of Washington study of graduate education. Spokane's slots were filled by University of Washington medical students specializing in psychiatry who were offered the chance to do half their residency in Eastern Washington, but during the recession even those few spots were closed due to budget cuts. (While the program stopped accepting new residents, it allowed those already participating to finish. The last resident will graduate this year.)

Now Layton, with help from Floura and others, is working to bring back the psychiatric residency program, in hopes of improving access to care in the region and attracting more psychiatrists to Spokane. If accredited this spring, the program will accept its first psychiatric residents next year. Not only will they make likely candidates for Spokane jobs once they're finished, but they'll be available to advise undergraduate pre-med students at the growing Riverpoint campus east of downtown.

"You need that whole pipeline, undergraduate through residency," says Layton, who's director of the current program.

Elsewhere, providers are working with what they've got. The practice of telepsychiatry, in which doctors consult with patients over video chat, is growing. Floura spends one weekend a month in Wenatchee, where he treats patients with no regular access to mental health care. Even in the face of funding and provider shortages, Frontier Behavioral Health, the region's biggest provider of mental health services, has taken a bold step. People looking for services are no longer told about the next available appointment — which may be weeks or months away — but to come in on the same day if they can. Since the change, demand for services has grown 20 percent.

"It's been enormously beneficial for those individuals who get the care they need," says Frontier CEO Jeff Thomas, "but there's not been 20 percent increase in federal or state funding coming to our county, and therein lies the challenge."

While psychology has not faced the same shortages as psychiatry — in fact, psychology students have struggled to find internships as more people gravitate to the field — working therapists are seeing their own challenges. Both psychologists and psychiatrists say they struggle with low insurance reimbursements. (The national and state push for parity between insurance coverage of physical and mental care is meant to help address that.)

In a tranquil office with a babbling fountain in the waiting room, psychologist Laura Asbell says she's one of the lucky ones. Asbell has been practicing for nearly 25 years and says she's seen insurance reimbursements decline as her operating costs have only increased. Since she's been in business long enough to build up a reputation and gain clients through word of mouth, Asbell says she can choose not to accept certain insurance plans if they don't pay enough. But new psychologists may not have the same freedom, and with every plan a psychologist chooses not to accept, a patient may have more trouble finding care.

"I'm on some [insurance] panels that don't pay very much because Spokane is not a wealthy community," she says, drawing a comparison to Seattle, where some of her colleagues take no insurance at all. "If you have wealth, you can access good care. If you don't have wealth, there are roadblocks that make it more difficult."

Back in the dated halls of Eastern, Floura emphasizes that patient care at the hospital hasn't suffered, even as he's struggled to find psychiatrists to fill the vacancies. Everyone steps in to fill the gaps, he says. Even he works directly with patients and takes his turn on-call overnight. He's confident that state lawmakers eventually will step up in the same way to increase mental health funding so he can offer psychiatrists competitive pay. The way he sees it, there's not much of an alternative.

"These are the patients [who] when nobody can take care of them in this community, they come here. We are the last resort for these folks," Floura says. "We have to sustain it. Where are these folks going to go?" ♦