Where the Wild Land Is 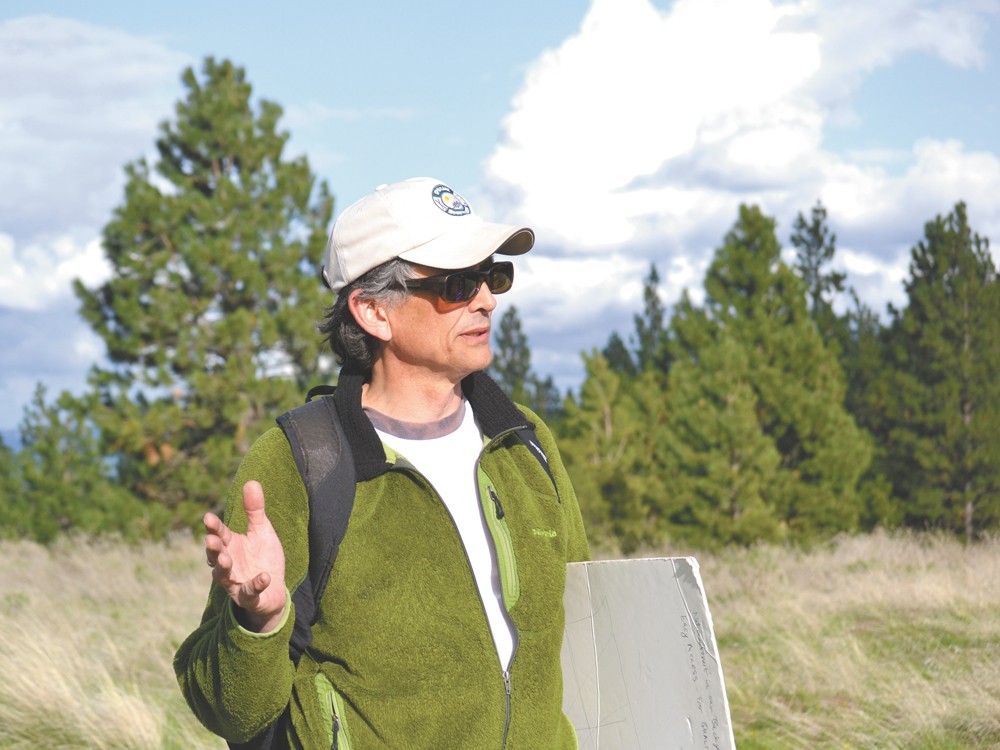 Ted S. McGregor Jr.
Jeff Lambert of the Dishman Hills Alliance describes the new land purchases from atop the Dream Trail.
If you count all the Douglas fir, the singing birds and two white-tailed deer, then I wasn’t hiking alone through the latest addition to Spokane’s official wildlands.

But if we’re talking about other humans — hikers, bikers, people riding horses, whatever — then I definitely was by myself wandering around the almost 300 acres recently added to Spokane County’s parks.

These are the Stone and McCollum properties, purchased in April with almost $750,000 from the Spokane County Conservation Futures program and the Dishman Hills Natural Area Association.

Together, the adjoining properties sit between the Dishman Hills Natural Area and the Iler Creek Conservation Area, and form a crucial hub for the long-envisioned “Dream Trail,” an as yet unfinished, uninterrupted path from Appleway Boulevard all the way to the Palouse.

For now, with swaths of private land separating the public areas, the “Dream Trail” will remain a dream. And the new public land, which sits almost exactly between Dishman Hills and the popular Big Rock, is ready to be explored.

“It’s perfect. Just perfect,” says Jeff Lambert, who is involved in a number of groups surrounding the purchase, including the Dishman Hills Alliance, the county Parks Advisory Committee and the Spokane Mountaineers. “I don’t know of any other place in Spokane where we can come up with almost 3,000 acres with tens of miles of trails for horses, mountain bikes and hikers, as well as all sorts of other nature activities, so close to the urban core.”

“This is the heart of the city,” says Suzy Dix, a well-known real estate agent who was instrumental in the recent purchase. “It’s five minutes from Ferris [High School], it’s five minutes from Chase [Middle School]. The whole South Hill is starting to realize what’s going on.”

Dishman Hills may conjure up visions of the car lots and wide roads on Appleway in Spokane Valley, but its original vision came from one high school science teacher and his regard for nature.

After years of exploring the Dishman area and leading educational hikes for the county, Tom Rogers came up with the idea to preserve the area in 1964.

“When I returned from solitary hikes in the Hills, I came out utterly depressed at the thought of the approaching time when the entire area would be developed, ‘improved,’ closed off, the children and adults of the community excluded,” Rogers wrote in the 1970s. “Obviously this attitude would never save the Hills. But did anyone else care?”

After he led a hike of about 75 people into the area in the spring of 1966, he realized others did care. By May of that year, a group was formed to save “the Hills,” as Rogers called them. That group survives today, as the Dishman Hills Natural Area Association.

Donations began to come in, and within a year the group purchased the first 80 acres of “choice natural land” in the Dishman area with $18,000. Soon, the county and the federal government ponied up funds to purchase 117 acres abutting this original land.

Lambert, the vice president of the Dishman Hills group, says this private-then-public land acquisition has been the habit in Dishman. In 1994, the group bought the southern Rocks of Sharon, near Big Rock, triggering the county to buy the nearby Iler Creek Conservation Area. In 2006, something similar happened with Big Rock.

And, with the latest purchase, the Dishman group raised more than $250,000, which Lambert says influenced the county buying not one, but two properties with Conservation Futures funds, an idea conceived and realized by Dix, the realtor.

Rogers died some years ago. Though it’s unofficial, it’s likely that the new conservation area will be named after him. And now, those original 80 acres that Rogers protected has bloomed to almost 2,300, including the 269 just purchased.

Spokane’s newest conservation land begins where a road ends — Thierman Road, to be precise. Red metal cattle gates mark the trailhead, if you can call it that. A lonely A-frame house with a faint blue roof and satellite dish stands sentry.

If you go, remember these markers because there is no sign, no parking area, no kiosk to inform you of your location or destination.

Hike into the woods and up the hill, sticking to the skinny path as it heads east. Avoid Robert Frost’s well-worn advice and take the path most traveled by when it diverges in the wood, so you don’t get lost and wander on to private property.

Half a mile in, you’ve reached your first summit. Look down upon Glenrose Prairie and the South Hill. Watch the grass sway on this open hilltop land for a moment before heading down the north side of this low hill.

Now you’re in the folds of these rolling foothills. In the distance to the east is your destination, the high hill over there. You’ll drop 100 feet in elevation, only to gain it and lose it again. The trail gets steep in spots, but even after a night of rain, it’s not too slick. Right before your final climb, once again up a grassy hill, a sign will catch your attention. It’s behind a gated fence and says, “No Trespassing.” It’s dimpled and torn by bullets.

Finally, after hiking a mile and a half and gaining more than 400 feet in elevation, you’ve arrived. Mossy boulders are deeply embedded in the earth, a clean seat, perfect for picnicking. To the north, you can see Dishman Hills at the end of a line of foothills. The towers on Tower Mountain blink to the south, and just beyond them are the Rocks of Sharon and the Palouse.

Over the past 15 years, Spokane voters have repeatedly voiced their support for preserving and maintaining natural areas through the county’s Conservation Futures program.

Conservation Futures, which was used to buy the new Dishman land, was originally created in 1971 by the state Legislature. But it wasn’t until 1994 that Spokane County commissioners adopted the program.

Since then, voters have kept the program afloat. Most recently, in 2007, the program was put up for renewal with no expiration. Voters approved it with 63 percent of the vote. Not counting this year’s purchases — which includes 552 acres south of Liberty Lake — the county’s program has acquired more than 6,000 acres. Among them are the Antoine Peak and Liberty Lake conservation areas and the Palisades and Rimrock in Spokane city limits.

In 2010, the program faced controversy when it was used to help purchase the YMCA property in Riverfront Park — just a fraction of an acre with a $5.3 million price tag.

At the time, critics argued that spending so much of the program’s funding on just one small property put its future in jeopardy.

Lambert, the Dishman Hills vice president, is also part of a decision-making committee for Conservation Futures. He didn’t support the YMCA purchase.

“There are properties that could have been acquired that won’t be acquired because of the $350,000 a year that goes to the YMCA,” he says. “Mica Peak is in play. There’s an additional area that can be added to Antoine Peak. Nothing is being acquired in the Beacon Hill area. It’s really a shame that we weren’t able to acquire any of those.”

Doug Chase, the county parks director, isn’t so sure.

“I don’t know if we could have [purchased more property],” Chase says. “Theoretically, there could have been more money available. Realistically, the YMCA was a phenomenal purchase for the community.”

He says that each property acquired by the county has something that distinguishes it.

“Whether it’s habitat, the views, the geological features. Each one really offers something unique,” he says, adding that the latest round of buying conservation land is not yet complete. “We have several properties on the list. Each acquisition is very time-consuming and has its own challenges. We’re still making our way down the list right now. Literally.”

Dix, the realtor, says that the new conservation land represents the best of how the money should be used.

“This is pure. This is big. This is cheap,” she says. “We bought it when property values were very low. … It could been worth a lot more money in different economic times.”

In 2002, as a large Dishman park stretching six miles from the Valley to the Palouse became realistic, the notion of a “Dream Trail” was conceived.

Before the recent land purchase, the trail seemed pretty far off. Most of the land was private, and the only designated natural land between the north and south extremities was a 150-foot-wide wildlife corridor.

The recent purchase places a piece right in the middle of the puzzle, and the “Dream Trail” suddenly looks more like reality.

There are upwards of 20 property owners who have land that could feasibly be part of the park. But as few as eight properties are needed to complete the trail.

“Let me just say that we know all the property owners … and some of them are very sensitive to having discussion about their property,” Lambert says. “I would say that I’m optimistic at some point, in the long run, of having some sort of trail that connects.”