Recovery is coming slowly after fire blackens the Methow Valley 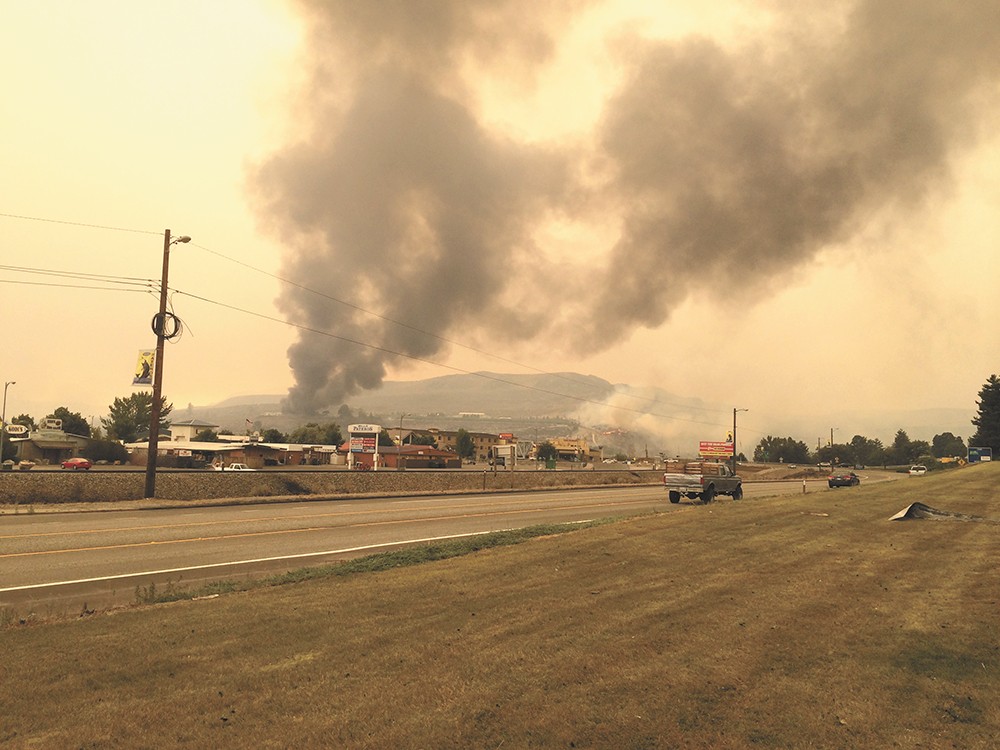 Scott A. Leadingham
The scene in Pateros on Friday.

On a normal July Sunday,

Alta Lake State Park and the nearby golf course would be buzzing with tourists and recreational users. Three days after a wildfire swept through, the dominant sound is not of boats in water and golf carts humming across fairways, but of recovery and shock. People sift through the ashes of their lives, dozens of homes gone. Journalists click away with cameras. TV crews interview one displaced resident after another. A shed full of golf carts burned, leaving nothing but the twisted metal of wheels and flimsy frames.

It's one of many scenes once thought unimaginable, now painfully real, after the Carlton Complex Fire raged late Thursday, July 17 and early Friday, July 18.

As of Monday, July 21, the fire, which had started as multiple lightning-sparked incidents a week before in the Methow Valley, had ballooned to nearly 300,000 acres. The number of homes and structures burned was still unknown, with reports estimating between 150 and 200. The final count won't be known for some time.

With a catastrophe this size and so spread out, the true scope is difficult to take in. A few short miles down Highway 153 from Alta Lake, the town of Pateros was reeling Friday from what had happened a few terrifying hours earlier.

Carol Hamshaw stood overlooking the smoldering rubble of where the house of her daughter — the mayor of Pateros — once stood. Directly behind it, Hamshaw's house also burned.

"Pretty ugly, isn't it?" Hamshaw says, embracing a friend who had just walked up. In the immediate area around her house, at least 15 — and likely more — houses burned down.

Hamshaw says she had only a few minutes notice before the fire raced down the steep hillside that abuts Pateros. She knocked on the door of a neighbor, waking him, and they got out just in time. The fire burned south through town, jumped Highway 97, and ended its southern advance at the Columbia River. It continued to move westward toward Lake Chelan and eastward toward Brewster and Malott.

By Friday morning, Hamshaw had learned that her brother had also lost his house, in the golf course community near Alta Lake. One point of luck: Her granddaughter's playhouse somehow survived, standing eerily over a field of charred lives, suddenly the tallest structure in the immediate area — not counting the chimneys with no houses left around them.

From Pateros to Alta Lake, which are low in the Methow Valley at the confluence of the Methow and Columbia rivers, north to the higher terrain of Carlton and Twisp, one dominant theme emerges: the difference between what survived and what burned. The saving color was green.

The lower Methow Valley and towns along the Columbia and Okanogan rivers are driven by the tree fruit economy. In the burned landscape, the green of wet, irrigated apple orchards sticks out, unharmed by the fast-moving fire burning dry sagebrush, the dominant vegetation of the central Washington high desert.

Houses adjacent to orchards, or with areas of green, cleared defensible space, were spared. Seemingly everything else in sight was charred black.

Putting Out Fire – and Rumors

As quickly as wildfire spreads, or tornadoes obliterate towns, so does misinformation travel. With the ease of sharing allowed by social media, rumors and untruths about what had and had not burned were almost impossible to stop. Erroneous news media reports that the core of downtown Pateros — a gas station/restaurant/hotel on the waterfront — had burned were flying before the light of Friday morning.

On Sunday, July 20, Jeanette Palmer sits in the very gas station that supposedly burned, greeting her fellow townspeople. As the owner of the Chevron and adjacent hotel, she's responsible for 50 employees. She doesn't know how those rumors started, but wished people — and news media — would stop spreading them.

"If I don't see it, I don't believe it," she says, glancing down at her cellphone and stopping to chat with a resident.

The sense in the gas station is that it's a place to meet, to say hi, to get information, to relax, to get a cold beverage and take a few minutes away from the stress of recovering from a major disaster. It's also one of the few places in the area on this day with power — because of "a called-in favor," Palmer says — due to a generator. With the generator, gas pumps can run, and a limited amount of food and beverages stay chilled. Signs on the door say "Cash Only." With no phone lines functional for the entire area from Pateros to Winthrop, there are no credit card transactions. It's almost quaint.

Quaint also can describe the town of Twisp, 34 miles up the Methow Valley from Pateros. Among its many outdoor recreation and arts-themed stores is the Cinnamon Twisp Bakery, a local must-go for breakfast and lunch. If this were an ordinary Sunday in the height of tourist season, a late-morning breakfast crowd would be lined up nearly out the door.

Today, though, with no power in the valley, and tourists staying away due to the fire, the streets are relatively empty. That is, except for a table outside the bakery. Employee Dara Farmer is handing out coffee and fruit — for fire victims or anyone else stopping by to chat.

"Coffee is somehow a magical connector for the sleep-deprived and the stressed," Farmer says. "Coffee isn't always just coffee."

A donation jar isn't out to offset the costs, but to fund-raise for victims. One of the bakery's 15 summer employees lost her house. More than a fund-raiser, though, it's a place to lend an ear, or share information, a kind of local watering hole where everybody probably knows your name.

People come not just for coffee, but to cope.