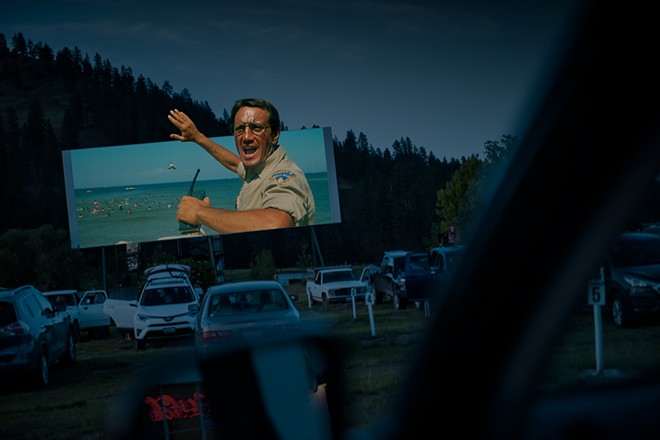 It's been 99 days since I've gone to see a movie, not that I'm counting. After driving 70 miles and waiting in line for about a half-hour, I'm finally about to watch a film with a crowd for the first time since March. Sure, the movie isn't a new release, and the crowd is dispersed in a field, but I'll take what I can get.

Colville's Auto Vue Drive-In has been showing films every summer since the 1950s, and last weekend I made the journey from Spokane to catch a screening of the Steven Spielberg classic Jaws. It seems fitting that I'd be watching a 45-year-old movie in a venue that could have conceivably showed it when it first came out.

You might think of the drive-in as a novelty, a charming relic of the past. But as Hollywood keeps pushing the release dates of its biggest summer properties and brick-and-mortar theater chains contend with reopening, the country's remaining drive-ins have experienced a surge in popularity. It might be an antiquated method for watching movies, but it's perfect for social distancing.

As I pulled my Subaru into the Auto Vue's grassy lot, I crunched some more numbers. It's been 25 years since I've visited an actual drive-in: It was in the summer of 1995, when my parents took me to a double feature of the submarine thriller Crimson Tide and the Sylvester Stallone bomb Judge Dredd. I fell asleep almost as soon as the car was in park.

Dusk settled over us, the radio station that transmits the movie's audio warming up with '90s country songs, and I'm immediately transported back to my childhood. I felt right at home.

When the Auto Vue first opened in 1953, the drive-in theater was at its peak. Though drive-in concepts had existed since the 1930s, increasing car ownership meant a surge in activities that revolved around automobiles. By the late '50s and early '60s, there were more than 4,000 drive-in theaters in the U.S.

The drive-in was eventually knocked from its great heights by mall multiplexes and air-conditioned suburban theaters, and some historians have attributed its decline to the oil and energy crises of the 1970s. That's around the time that Steve Wisner's family purchased the Auto Vue Drive-In. He grew up in theaters of all kinds, and he remembers fixing speakers at the Dalles Drive-In in Oregon when he was only 10, and being taught by his grandfather how to project 35-millimeter film.

Derek Harrison photo
You can take your car on a trip back in time in Colville.

Wisner still owns the Auto Vue, as well as Colville's indoor Alpine Theatre, with a staff of just six employees. The drive-in typically opens in early May and closes after Labor Day weekend, though they got a bit of a late start this year because of health regulations.

During the drive-in's heyday, there were (per the archival website Cinema Treasures) eight of them in Spokane, including locations on Sprague and Trent; the Y Drive-In and the Autovue Drive-In, both on North Division, and the Starlite Drive-In off of the Newport Highway. Drive-in culture has always been associated with more low-budget films, but the fare became racier and more violent as the years wore on. Per the website Spokane Historical, members of the City Council in the mid-'70s had considered regulating the films booked by local drive-ins, "but little was done."

I've always been enchanted by the charming seediness of that era — how crazy it seems now that you would park in a lot down the street from your house and take in nudie films by the likes of Russ Meyer, or gory exploitation flicks by Herschell Gordon Lewis or Roger Corman. My friend Chris Cook, the current poet laureate of Spokane, has regaled me with stories about how he and his friends spent most of their drive-in money at the Starlite, then owned by the gregarious Walt Hefner and which specialized in schlocky B-movies and trashy horror pictures.

Cook recalls a particular triple feature of three exploitation classics with salacious titles — I Spit on Your Grave, I Dismember Mama and Snuff — that stuck with him. That latter film, a notorious 1976 shocker that purported to feature footage of a real murder, disturbed Cook so much he actually called Starlite owner Hefner to ensure he wasn't watching an actual snuff film.

"The only time I've ever tried changing the birth date on my driver's license was an attempt to get into the Y Drive-In," Cook says. "You had to be 17, and [they showed] awful softcore European films with terrible dubbing. ... That's why we'd end up watching for free in the hills behind the Y Drive-In, along with lots of other cars, and you could form your own dialogue if you wanted to."

Perhaps the appeal of the drive-in, especially to hormonal teenagers going on dates and breaking curfew, was that the interior of your car was your space. No doubt that was fueled further by the carnival sideshow aspect of the low-rent movies that were shown, a sense of lawful lawlessness, like you were getting away with something even if you weren't.

"You had your own domain there," Cook says. "It's a place where kids could have control over their situation."

Sometime in the mid-2000s, when theaters everywhere were phasing out celluloid film in favor of digital projection, Wisner says he contemplated closing down the Auto Vue for good. But then on a trip to California, he and his wife visited a drive-in for a retrospective screening of 1977's The Goodbye Girl, and he saw the appeal of the drive-in in an entirely new light.

"I had a great time," he says. "And after that I was thinking, 'Now I know why everyone wants to go to the drive-in.' I had lost it because I was there all the time. But now I can see what the draw is."

The Auto Vue is still going strong as one of 300 or so operational drive-ins in the country, and as the 220-car lot started filling up last Friday night, I was glad it was there. I parked near the back of the lot, strategically near the small concrete building that houses the concession area which sells traditional theater snacks as well as hamburgers and pizzas. By 9 pm, there seemed to be 80 or so cars in there, with people ready to take in the movie from the beds of their pickup trucks or from blankets they've laid out next to their cars. There are families, groups of teenagers, older couples who no doubt saw the evening's main feature back when it was new.

A half-hour later, darkness having descended over Stevens County, Jaws starts. With my windows down, the crisp June air wafting in and the John Williams score thrumming from my car stereo, I watch through my windshield as the socially distanced audience settles in and remembers what it's like to go to the movies. ♦