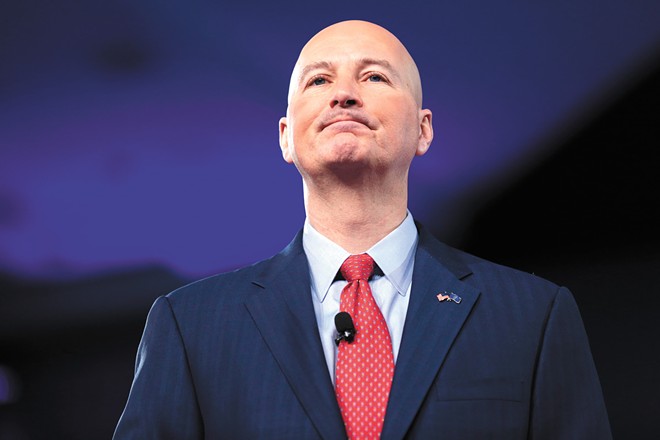 Cannabis legalization is no longer confined to blue states, but Republican lawmakers aren't yet on the same page with each other about how to deal with this green wave. The divide between members of the same party on this issue was on stark display last week when Republicans in neighboring states made radically different statements about legalization.

"This is a dangerous drug that will impact our kids. If you legalize marijuana, you're going to kill your kids. That's what the data shows from around the country," Ricketts said on March 10.

According to the National Institute on Drug Abuse, a governmental agency, "there are no reports of teens or adults dying from marijuana alone."

Ricketts continued to argue that the legalization fight in his state undermines the ability for proper regulation of what he considers to be a dangerous drug. In Wyoming, his fellow Republicans argued the exact opposite: that legalization through the Legislature would allow for more proper regulation.

The Republican chairman of Wyoming's House Judiciary Committee, Jared Olsen, explained how legalization through ballot measure largely excludes state lawmakers from the regulatory process. Therefore, the Wyoming Legislature should get out in front of the legalization effort in order to have a say in how the process plays out.

"I bring a solution in an attempt to put our arms around it and decide what we want it to look like," Olsen said.

Olsen also mentioned polling data that shows growing acceptance of cannabis, both in Wyoming and around the nation. It appears inevitable that the laws will be changed eventually, and he believes it's best for lawmakers to be proactive on the issue. Meanwhile, Nebraska's governor is asking to preserve the status quo.

The problem is, the status quo is changing. South Dakota, a deep red state that borders both Wyoming and Nebraska, legalized cannabis at the ballot box last November. That led the state's Republican leadership on a mad dash to mount legal challenges in an effort to block the will of the voters. In Wyoming, Republicans seem to recognize that and are working to avoid it. In Nebraska, not so much. ♦

The original print version of this article was headlined "Red State, Green State?"

The U.S. House seems ready to legalize cannabis, but prospects aren't great in the Senate