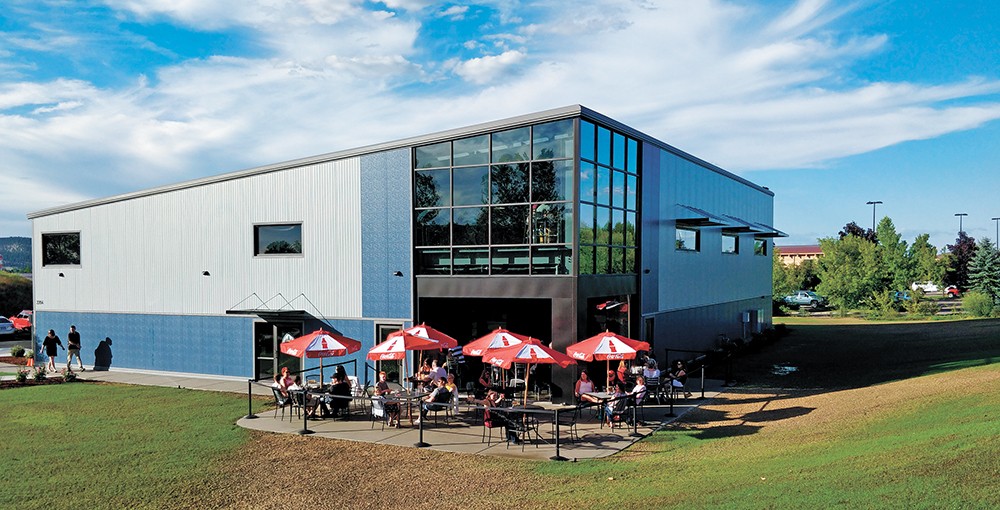 Trailbreaker Cider is now open and pouring in Liberty Lake.

When life gives you the proverbial lemons, make cider. That's what Whiskey Barrel Cider Co. owners Trent Maier and Brian Augdahl did three years ago when they discovered they'd have to vacate their production facility in the Pullman-Moscow Regional Airport due to a planned expansion.

In 2016, they closed the tasting room, revamped their business plan, and shopped for a new location. Last month, they relaunched as Trailbreaker Cider in Liberty Lake.

The former Whiskey Barrel name, explains Maier, didn't apply to all the cidery's products, only one of which is currently barrel-aged. The relocation became an opportunity to rebrand and to re-emphasize the fresh-pressed juices that distinguish their ciders.

At its simplest, cider is juice resulting from mashed, strained apples, which becomes hard cider through fermentation. Everything else is extra: sugar or juice to increase alcohol content, additional flavors, carbonation and preservatives to increase shelf life.

"The juice is what it's all about," says Maier, who started the company with brother-in-law Augdahl in 2012. The duo work directly with growers throughout Washington, including a Washington State University-run orchard that was also impacted by the airport expansion, Maier says.

"We're one of the few facilities that goes from apple to juice," he says.

First, they make the hard cider — Maier has several basic cider recipes — then blend it with fresh-pressed juices and other ingredients to create ciders varying in alcohol percentage and taste. Trailbreaker's aptly named Dry and Crisp, for example, is 5.8 percent alcohol-by-volume , while the signature Whiskey Barrel is tawnier, with a weighty 7 percent ABV. The Cucumber Mint, meanwhile is surprisingly refreshing.

If Maier's approach sounds like a winemaker's, it's on purpose. Intrigued by cider making, the Michigan native attended culinary school in Seattle, learning about cooking, running a kitchen and winemaking.

Unlike winemaking, however, which often involves sulphites as a preservative, Trailbreaker doesn't add preservatives. Instead, a sterile fermentation process stabilizes the product, allowing it to last one to two weeks in a growler until opened, Maier explains.

In addition to the 14 ciders on tap ($4-$6/pint), Trailbreaker serves two juices, one called "Sappy Fresh," and a blend. Tasting flights served on live-edge wooden trays to match the space's focal bar accommodate five 4-ounce samples. A standard flight is one juice and four ciders ($8); for $2 more, swap the nonalcoholic juice for a fifth cider.

Trailbreaker's food menu is modest: assorted dogs and sausages from bratwurst to linguica ($6-$11), a soft pretzel with cheese ($4), a grilled peanut butter and jelly and grilled cheese ($4 each). On Thursdays, try the rib special ($13).

Seating is abundant in the newly built, 10,000-square-foot facility, both on a patio and indoors in diner-like booths or high-tops on the main floor, where roll-up garage doors bring the outside in. The second floor affords views of the production facility, including an array of crated apples, from bright green to pinkish-red.

"If you see it in the grocery store in the Northwest, chances are we use it," says Maier, who's already working on plans to expand the cidery's barrel-aged offering under the Whiskey Barrel brand.

With an increased capacity over their old facility — about 80 barrels or 2,500 gallons every two weeks — Maier figures the cidery can produce enough to distribute throughout the Northwest and fulfill orders in-house.

And they're doing all of this, he adds, with regionally sourced apples that otherwise would be rejected by supermarkets.