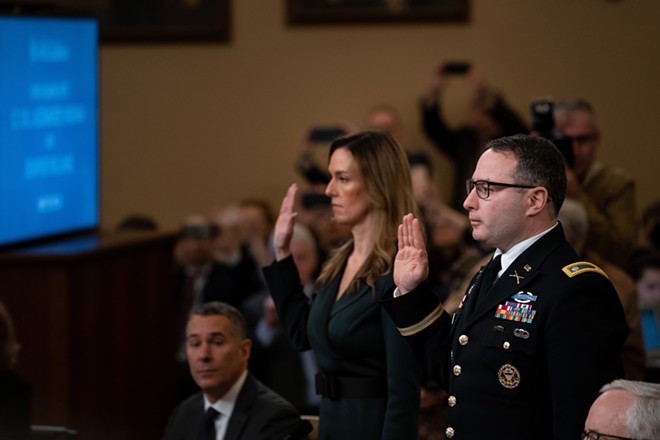 WASHINGTON — The White House attacked its own top Ukraine expert Tuesday as he offered sworn testimony before the House’s impeachment inquiry that President Donald Trump’s request to Ukraine’s president to investigate Democratic rivals had been “inappropriate” and validated his “worst fear” that American policy toward that country would veer off course.

On the opening day of a packed week of impeachment testimony, the expert, Lt. Col. Alexander S. Vindman, who serves on the National Security Council, said he was so alarmed by the request as he listened in to a call on July 25 between Trump and President Volodymyr Zelenskiy of Ukraine that he reported his concerns to White House lawyers. On the call, Trump pressed Zelenskiy to investigate former Vice President Joe Biden and an unproven theory that Democrats conspired with Russia to interfere in the 2016 election.

“I couldn’t believe what I was hearing,” Vindman, an Iraq War combat veteran who appeared before the House Intelligence Committee dressed in his deep-blue Army dress uniform covered with military ribbons. “It was probably an element of shock — that maybe, in certain regards, my worst fear of how our Ukraine policy could play out was playing out, and how this was likely to have significant implications for U.S. national security.”

Sitting beside him, a second White House official who also listened in on the call, Jennifer Williams, testified that she found Trump’s phone call with Zelenskiy “unusual and inappropriate,” saying she was struck that Trump was pressing a foreign leader about a personal domestic political concern.

Both witnesses testified that it was clear to the Ukrainians that the United States was withholding vital military assistance, saying that Trump administration officials had questioned the legality of doing so. And both said that no national security official in the administration supported the freeze in aid.

Williams, a national security aide to Vice President Mike Pence, recounted a September meeting between Pence and Zelenskiy in which the Ukrainian president explained in dramatic terms how failing to provide the money would only help Russia.