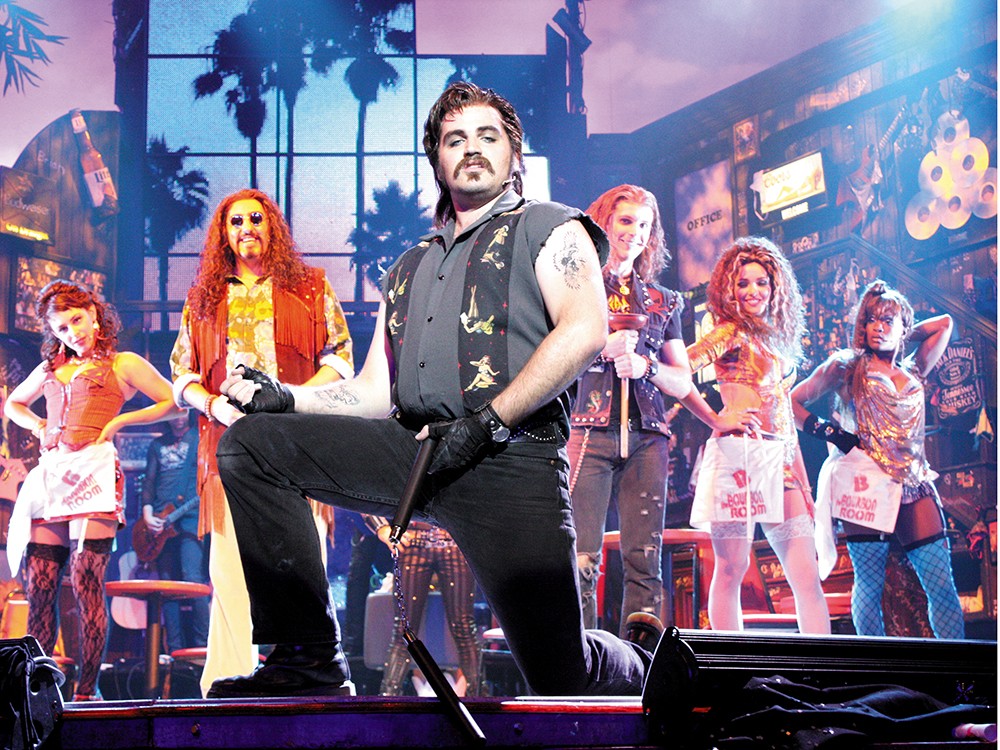 Rock of Ages brings a heavy dose of nostalgia to INB this weekend.

Do you wanna rock? Do you wanna get rocked? Are you lookin’ for nothin’ but a good time? Prepare to fall in love with a boy named Drew and a gal named Sherrie, as they navigate their way through the ridiculous and heartfelt (and ridiculously heartfelt) Rock of Ages.

Set against the no-holds-barred culture of the 1980s, Rock of Ages finds its home, more specifically, at a little fictitious place on the Sunset Strip known as the Bourbon Room. The club is on the verge of demise at the hands of some German developers named Hertz and Franz (cue “We’re Not Gonna Take It”), when Sherrie Christian, a big-haired blonde from the Midwest, arrives in town for a fresh start (cue “Sister Christian,” “Oh Sherrie”). She meets and falls for Drew, a wannabe rocker with a heart o’ gold (“I Wanna Rock”), who gets her a job as a waitress at the club and introduces her to the rock ’n’ roll way of life at the Bourbon — replete with rock stars named Stacee Jaxx (“Dead or Alive”) and floors to mop (“Just Like Paradise”).

And that doesn’t even scratch the surface of what this show’s soundtrack has to offer.

Sure, the leads are cute, the supporting characters quirky and the story fun, but the show’s goal is to have you bubbling over with nostalgia. (That was you in the front row of that Poison concert in ’89, right?) The entire soundtrack is ’80s hits, ranging from Bon Jovi to Pat Benatar, Twisted Sister and Journey. The show’s storyline — the wayward club; the love on the rocks; the overbearing, fading star — is where it finds its heart, but the music is what gives it its mojo.

“Every song in the show gets a huge response from the audience,” says Dominique Scott, who plays Drew in this second national tour (Broadway’s original Drew, Tony nominee and American Idol finalist Constantine Maroulis, was on the first tour).

“It happens because they recognize them. As soon as they hear the opening riff to ‘Don’t Stop Believin’,’ or when Lonny sings the first line of ‘I Can’t Fight This Feeling,’ the songs conjure up feelings and memories for people of what those songs meant to them growing up. Nostalgia is very powerful,” says Scott.

Indeed it is. At its core, Rock of Ages is a love letter to a decade that culture now likes to poke fun at, but for which nostalgia remains so great that it’s kept the era’s fashion alive (don’t pretend that you’re not rocking your Risky Business Ray-Bans again) and many of its bands touring well past their expiration dates. People still clamor to see the likes of Def Leppard, Heart, Styx, Poison and Night Ranger on tour in stadiums and casinos year after year, and they do it because that music — silly, simplistic as it may seem — has managed to ingrain itself in generation after generation.

Lucky for Rock of Ages, those tunes still play with such power in the live setting, where they can take on rock concert-like volumes. So, YES, last year Rock of Ages got a film adaptation in the form of Tom Cruise’s bare-chested prowess as aging rock god Jaxx (and damn, it was actually sorta good — except for the rest of the movie), but as any rock show aficionado knows, a 2-D version is no match for the real thing.

“They’re both really different things,” he says of the comparison. “They’re incomparably different experiences — like the difference between seeing a Bon Jovi concert live and seeing a documentary about Bon Jovi... they’re both great but totally different.”

Rock of Ages’ two-plus hours zip loudly through our culture’s loudest decade, matching cornball with screwball, spandex with pleather and mega-cheese with mega-heart. On Broadway, the actors were known to break the “fourth wall” in order to talk directly to the audience. There’s a certain level of play involved in making something like Rock work, and the folks behind it are well-aware. After all, it ain’t exactly a capstone of its time period in the same way that HAIR continues to catapult its audiences into the harsh realities of the ’60s... but it will, um, rock you.

“Expect a lot of loud music, a lot of fist pumping and a whole lot of awesome,” says Scott.