Why Gonzaga has success developing prospects into NBA players 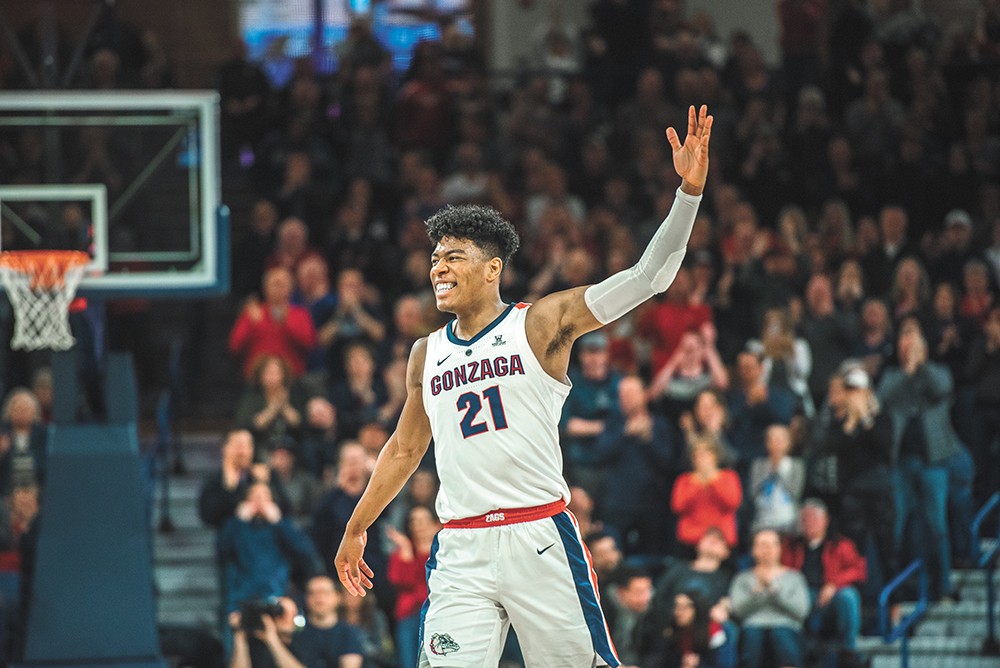 When Gonzaga was trying to land top recruit Zach Collins, who had ambitions for the NBA, the program didn't need an elaborate pitch to convince him that coming to Spokane could lead him to the pros.

"We just showed him," says assistant men's basketball coach Donny Daniels. "At that time, [Domantas] Sabonis had gone to the pros. [Kyle] Wiltjer was in the pros. [Robert] Sacre had been in the pros. Kelly Olynyk was."

It's the natural progression of the program, says Dan Dickau, the former Gonzaga star who enjoyed a six-year NBA career. Recruits want to be part of a winning program, but they also want to see that other players like them used the program to propel themselves to the NBA.

"I think Gonzaga has a definite blueprint to be able to show that they've developed guys to get to the NBA, and then also to have success once they're there," Dickau tells the Inlander.

Collins, of course, would join that line of Gonzaga big men to make it to the NBA just a year later, the 10th pick in the 2017 NBA draft. And soon, Zags like Rui Hachimura and Brandon Clarke are likely to move on to the next level. It's become normal for Gonzaga to have top NBA prospects on the roster.

So what does that blueprint Dickau mentioned look like? Daniels, a top recruiter in his ninth season as a Gonzaga coach, says it's a combination of things. Deep runs in the tournament are "invaluable" experience for players who want to go on to the next level, whether that's the NBA or another pro league, he says. Daniels also credits strength and conditioning coach Travis Knight for helping players develop their bodies, and the facilities at Gonzaga let guys who want to work nonstop do so.

And being in Spokane has its unique perks.

"Johnathan Williams said it the best: 'There's nothing to do in Spokane, that's why I play basketball all the time,'" Daniels recalls.

Olynyk, now on the Miami Heat, might be the best example of how quickly players can develop into NBA prospects at Gonzaga. Olynyk took a redshirt year at Gonzaga simply to develop his game. Daniels says he worked in the morning, went to class, went to practice, shot at night, and lifted weights.

"When he came back for his junior year, he was unbelievable," Daniels says.

Now, the program calls redshirt years after a the "Olynyk clinic." Dickau had his own redshirt year in the 1999-2000 season after he transferred from the University of Washington.

"I had coaches that were definitely influencing me, encouraging me, working with me to continue to improve," Dickau says. "I think now, based off the resources they have, the analytics, they can break things down into more detail ... with all these things they have at their fingertips, they can map out a plan."

Dickau says Gonzaga big men have had so much success because they often come in with international experience. The way bigs grow up learning the game is just a little different outside the United States. Gonzaga uses that to its advantage.

"The way Gonzaga plays has accentuated a lot of their skill sets and abilities," Dickau says.

Daniels doesn't want to take credit for coaches developing players. The credit should go to the players, he says. Collins, who was at Gonzaga for just one season before he was drafted, was simply a player with NBA destiny.

"It's hard to say in eight months, we did this. No, we didn't do anything," Daniels says.

Part of the Zags' recent success going to the NBA is that Gonzaga, currently the top-ranked team in the country, can now recruit top talent. Part of it is that Gonzaga chooses players who are ready to put in the work.

"We have good coaches," Daniels says. "But you gotta remember: The kid has to show up. He has to want it as much as you want it." ♦