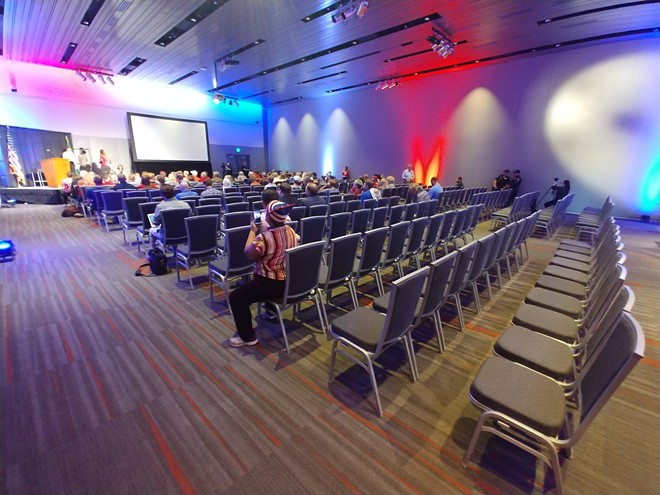 The tickets, KXLY reported, were sold out in less than an hour.

And yet, by the time the meeting started, the ballroom looked like a ghost town. Less than 150 seats had been filled.  While McMorris Rodgers' staff made it clear that people who came to the event without a ticket would be let in if there was room, it didn't appear like anyone did.

It was a mystery: While there had been some empty seats at her town hall at a smaller venue at Gonzaga last year, that time the room was raucous and heavily attended, with McMorris Rodgers being subjected to particularly tough questions. This time, while she did get some pointed questions from a pro-refugee group member and a Planned Parenthood supporter, the vast majority of questions were from supporters.

One questioner asked whether she was willing to run for speaker of the house and then put his ticket in his mouth so he could lead the audience in a round of applause. At least two questioners announced they were a part of the "Cathy Represents Us" campaign.

And yet, this year, if anything, there has been more scrutiny put on McMorris Rodgers, with the race more competitive than it has ever been. McMorris Rodgers had been attacked for not doing more large well-advertised town halls.

Lisa Brown did, for starters.

You know, how, on the HBO original series Big Little Lies, Renata's daughter Amabella doesn't invite Jane's son Ziggy to her birthday party, so Madeline — upset over the snub to her friend — scrambles to put on a trip to Disney on Ice on the same day to compete with it?

After McMorris Rodgers' free tickets "sold out," people were upset about not getting in. They slammed McMorris Rodgers for not holding the event in an even larger venue.

"We had a flood of people that were really upset about not getting any tickets to any events,"  says Tanya Riordan, Lisa Brown’s campaign manager. "A massive amount of people very upset."

So in response, Brown decided to hold her own town hall, one that didn't require tickets at all. It was simply first , first serve. It was about giving people who couldn't give tickets another option, not trying to crowd out McMorris Rodgers event, Riordan says.

"We definitely didn’t encourage anybody to not attend the CMR event," she says.

The absentee list was bipartisan. There was sicknesses and other events that came up. The smoke kept some people home. But the Inlander also spoke with multiple critics of Cathy McMorris Rodgers who ditched the event despite having tickets. Many of them opted to attend Lisa Brown's event instead.

When asked several explained that they felt that McMorris Rodgers would simply dodge their questions anyway or give word-salad answers.

"I decided I would rather hear from Lisa because she has been developing her positions through constituent contact since announcing," says Mia Emerson, a Lisa Brown supporter who had a ticket for McMorris Rodgers' town hall. "I know Cathy's positions, or at least her talking points and I have never heard her give anything but GOP talking points."

She says there wasn't anything like an active campaign that she knows about to try to dissuade people from attending McMorris Rodgers' town hall. She says her activist friends just came to the decision not to attend individually.

"There was about which one each individual wanted to attend but no one tried to convince anyone else," Emerson says. "If Lisa had not had her town hall the same evening, I'm sure many of us would have attended Cathy's."

Some managed to give their tickets to other attendees. Emerson says she but was unsuccessful. Ultimately, she says, she was sad that the attendance at both events seemed to break down along party lines.
click to enlarge

There were others with similar stories.

Steve Vessels, who has an "I support Lisa Brown" logo on his Facebook page, says that he got his ticket for the Cathy McMorris Rodgers' event the night before.

"I was always thinking that I would be denied, 'cause I oppose her and everything she stands for," Vessels wrote on Facebook. But though he received a ticket, he says he attended Brown's instead.

"The Convention Center Cathy? Your town hall should have been at an IHOP," he wrote on Facebook. "Read the tea leaves. Spokane does not like you."

The Indivisible Spokane group planned a protest outside McMorris Rodgers' rally to object to only 300 tickets being issued. But when Brown's town hall opened up, they encouraged people to attend that event instead.

"A real leader is having a town hall, with no tickets required!" activist Cynthia Hamilton wrote on the Facebook page. "Lisa Brown is available at the Valley Event Center on Sprague. Doors open at 5, town hall til 7. We encourage citizens to go to that event instead."

No matter what, state Democrats pounced upon the visuals of Lisa Brown's packed town hall compared to the sparsely attended McMorris Rodgers' event.

And yet, it seems to step on the foot of a new negative Lisa Brown ad, which slams McMorris Rodgers' alleged lack of accessibility. It's one of those ads that a negative New York Times column without making it clear it's an opinion piece, not a straight news article. It accuses McMorris Rodgers of not being accessible to her district unless you have enough money to attend a fundraiser.

"When she does come back to eastern Washington to talk about issues, it's behind closed doors, by invitation only," a woman's voice says as mysterious music plays in the background.

"You shouldn't have to buy a ticket to talk to your congresswoman," Lisa Brown says as the ad finishes.

But here was a well-advertised town hall where some of McMorris Rodgers' biggest critics had free tickets to talk to their congresswoman and a number of them passed up on the opportunity.

While sometimes events use the United Airlines strategy of selling more tickets than there are seats available, Spokane Convention Center rules appear to prohibit that.

"Licensee agrees not to sell, or permit to be sold or disposed of, any tickets for any scheduled event in excess of the official seating capacity of the Premises," the center's event planner's guide explains.

So why make the event ticketed in the first place?

McMorris Rodgers' spokesman Jared Powell says that part of it was to respond to the flood of interest — you want to make sure there's enough room for everybody without a huge backup at the door. And part of it was security — just this month a man in New York was arrested for apparently making threats about McMorris Rodgers concerning family separation.

But in the future, Powell says, her team might do things differently.

"You know, we will probably re-evaluate it moving forward," Powell says.