A graphic video showing Spokane Officer Dan Lesser lifting a police dog into the cabin of a truck where it mauled a suspect who appeared to be surrendering left many in the community outraged. And the fact that department brass ruled that the use-of-force was justified also raised eyebrows — causing some to question how the department uses dogs in policing.

Bites from police K-9s make up a significant share of all recorded uses of force by Spokane Police officers. For instance, two K-9 handlers accounted for 14 percent of all use-of-force incidents that occured between 2013 and 2018 — and most of those involved dog bites, according to a 2019 report compiled by Police Strategies LLC, a policing consultant firm. Dogs also accounted for the second most frequently used weapon over that same six-year period, second only to stun guns. Additionally, dog bites have been increasing over time.

"A lot of our use of force, especially serious use of force, are K-9s," Beggs says. "It opens up the city to potential substantial liability, not to mention the injuries and potential death of somebody.

"What I've seen over the years, there will be someone in a closet and instead of waiting for them to come out, they'll send the dog in to bite them," he adds. "That causes a lot of secondary trauma and damage."

Currently, the Spokane Police Department has a total of six K-9 dogs, all of which are paired with officers who serve as "handlers." They act as floating patrol units that can be called to specific situations where officers think they might be useful in locating or apprehending a suspect.

Officials within the department argue that K-9 units frequently get called to active situations involving high-level crimes, such as robberies, burglaries and serious assaults.

"You have someone who robs a grocery store or a bank, they run into a building. How are we going to respond to that? We call a K-9 team," says SPD Maj. Kevin King, a former longtime K-9 handler. "These are dangerous calls. It's because of the situations."

"Ours do have the higher number of uses of force because they are going to the most dangerous calls in the city," says Police Chief Craig Meidl. "With property crime, burglaries, stolen vehicles, with domestic violence being one of our top calls, we will typically have a K-9 respond because they are better at locating these individuals because of their sense of smell."

Still, Beggs, the council president, thinks that the way the department trains their dogs may also have an impact on the high frequency of dog bites. Specifically, he points to the fact that Spokane's dogs are trained in so-called "find and bite," meaning that, upon verbal command, they will locate a suspect and then apprehend them by biting until their handler calls them off.

"I'm totally supportive of K-9s either sniffing for drugs or bombs or finding people who are hiding, especially in dangerous locations, that's a great thing," Beggs says. "But using dogs to bite people... I don't think that's a good policy.

"We should at least have the discussion about whether we should have the dogs bite people. It doesn't seem to serve a purpose and it causes a lot of damage." 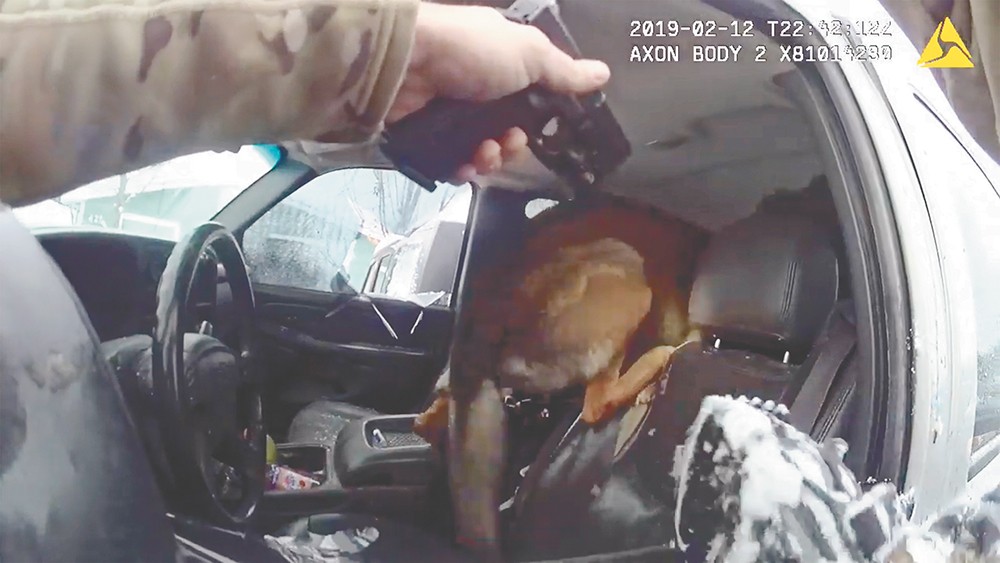 A screenshot of a controversial arrest in February involving Officer Dan Lesser and a Spokane Police dog.

Beggs argues that the department should be looking into acquiring "find-and-bark" (also referred to as "find-and-hold") dogs, who are reportedly trained to follow suspects and merely bark at them unless they flee or attack, in which case, they can bite. Using pain to make suspects compliant can be achieved through other tools, he says.

"If you didn't have the dog, you'd probably use something else, like a Taser or a bean bag shotgun," Beggs says. "If what you're trying to do is use pain compliance on someone, which is how they use those dogs often, there's other ways to use pain compliance."

There has been a longstanding debate in the national K-9 community over the effectiveness of find-and-bite versus find-and-bark training techniques. While industry experts estimate that the vast majority of law enforcement agencies nationwide use find-and-bite dogs, the U.S. Department of Justice recommended that law enforcement agencies train their dogs in find-and-bark in a 2001 report, and the Los Angeles Police Department adopted the training technique for all of their dogs in the early 1990s and also changed their policies governing when they deploy dogs after facing litigation.

One 1997 study published in Annals of Emergency Medicine found that bites, injuries and hospitalizations decreased after the department made the changes.

"If you have a hold-and-bark [dog] where you're not actually biting the suspect, unless the suspect attacks the officer or the dog, that's obviously going to lead to fewer bites and fewer injuries," says Merrick Bob, executive director of the Police Assessment Resource Center, a consulting firm that worked with Los Angeles County Sheriff's Department on its K-9 practices and other issues. "The hold-and-bite [dogs] are still producing horrific stomach churning incidents that are awful, where there are very serious and painful injuries."

"There is a controversy over the dogs that are trained to bite and hold. Is it really necessary?" says Kenneth M. Phillips, a Los Angeles-based attorney who exclusively focuses on police and domestic dog bite-related litigation. "And in many cases it probably would be necessary, but the problem is that the officers will deploy those dogs in all cases, not just the necessary cases."

"What you're doing is leaving it up to the dog's discretion when a bite can occur. It's not being determined by the handlers. ... That's very dangerous."

The main reason, critics argue, is that find-and-bark training gives the dog discretion over when it can or can not bark, as opposed to its handler. Ultimately, police dogs want to bite suspects and will look for a way to do so.

"When the dog understands that as soon as the person moves 'I can bite him' and the bite is what they want to do, they find a way to make the person move. The dog may bump him, the dog may fake charge him or lunge at him or whatever, and the average person is going to react," says John Peters, a Michigan-based police liability attorney who conducts K-9 legal seminars for departments across the country. "What you're doing is leaving it up to the dog's discretion when a bite can occur. It's not being determined by the handlers.

"That's very dangerous in my opinion," he adds. "At least as dangerous as a bite from a dog that is trained to bite and apprehend in the first place."

Paul Gorman is a longtime K-9 handler with the Spokane Police Department and current president of the Washington State Police Canine Association. "You can't ever let a dog make a decision. Because they're dogs," he says.

Chief Meidl says that he doesn't know enough about find-and-bark to have a definitive opinion on it and would have to do more research.

Besides, Maj. King argues, biting is a critical component of how they use dogs to apprehend suspects.

"It's like saying 'Well, let's have police officers out there that don't have the ability to use force,'" he says. "You're minimizing the effectiveness of the tool."

Some argue that dog bites, aside from causing injury and opening up departments to legal liability, are actually ineffective at gaining suspect compliance because research indicates that human survival instincts kick-in when they are being attacked by large animals.

"How do you think people react to dogs biting and attacking them? It gets back to something really primal," says Donald Cook, a Los Angeles-based attorney who has extensive experience suing law enforcement agencies over dog bites. "It has an effect on people that is absolutely counterproductive to the cop. The person becomes more concerned about the dog and getting the dog off them then doing what the cop was telling them to do."

Dog training aside, there's also the question of whether SPD's policy governing police dog deployments is itself too liberal. Current department policy states that a handler may use a dog to locate and apprehend a suspect when the suspect has "committed or threatened to commit any criminal offense" and "poses an imminent threat of violence or serious harm to the public, any officer, or the handler" or is physically resisting arrest or concealed in an area that poses a threat to officers or the public.

Peters argues that this policy is too liberal and could, "in theory," result in a high number of K-9 bites because of the condition allowing K-9s to be used on suspects who have threatened to commit "any criminal offense."

"The thing that bothered me the most about their policy was it allows for the use of the dog for 'any criminal offense.' And there is no qualification," he says. "That is, to me, exceptional. Not many agencies have that wide open of a K-9 use of force [policy]."

He adds that some agencies restrict K-9 deployments to people suspected of violent felonies: "They won't even allow you to release them on a misdemeanor suspect." ♦