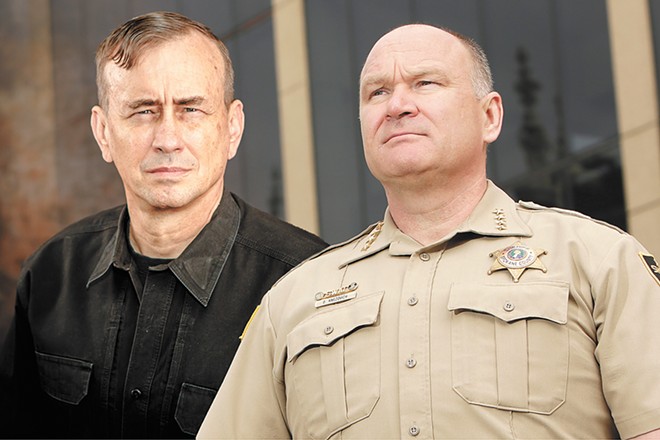 For nearly two decades, Dave Grossman has been training cops to recognize their role as society's protectors, encouraging them to think of themselves as frontline warriors where America's military cannot serve.

"The only thing that is holding our society together is the warrior. I use the word 'warrior' and I use it without apology, because if you are in a war, you are a warrior," Grossman tells a class of police officers during a training in 2012. "Is there a war out there? Is there a war on crime? Is there a war on drugs? Are there people out there who've declared war on you?"

The former Army Ranger taught psychology and behavioral science at West Point and Arkansas State University in the 1990s and offers similar lessons on survival mentality during his trainings like the "Bulletproof Mind."

But as protests continue around the country decrying police brutality, thousands are calling on Spokane County Sheriff Ozzie Knezovich to cancel a scheduled October training with Grossman at the county's training facility in Newman Lake.

The "Mindset Bootcamp" is set to combine multiple Grossman lessons on the psychology of killing and dealing with traumatic and dangerous situations, a form of study Grossman dubs "Killology." A poster for the event exclaims, "'Survival' is minimalistic and we must train to WIN!"

His training often centers on a "sheepdog" philosophy that officers are warriors there to protect the public like a sheepdog protects a flock of sheep from a wolf.

Grossman and Knezovich (who has taken Grossman's trainings multiple times) insist the training isn't meant to teach officers how to kill, but what to expect if they are involved in a potentially deadly situation. One of Grossman's foundations is that people are naturally averse to killing each other. Without training, he argues, officers won't be as effective at doing that when needed to save others, and will be more likely to suffer mental health issues afterward.

But so-called "warrior-style" trainings have come under fire in recent years. Grossman received particular attention after it was found that someone who attended his classes, a Hispanic officer in Minnesota, went on in 2016 to kill Philando Castile, a black man who specifically informed the officer he was carrying a gun and was not reaching for it when he was shot dead in his car.

That's troubling to a group of Spokane community members who have issued calls on social media and petition platforms to cancel the training this fall. They argue that even the suggestion that officers are at war with citizens, instead of there to protect and de-escalate situations whenever possible, could be dangerous.

"We want people to use force in those rare cases when it's absolutely necessary, say, a mass shooting type situation, but that's consistent with the protector mindset," says Andrew Biviano, a local civil rights attorney. "This war mindset is very troubling, and getting people to overcome their natural disinclination to kill is very troubling. If you're in the war and fighting the Taliban, it's a very different mindset than if you're in Spokane."

But Grossman tells the Inlander that his training for military and law enforcement differs, and says many of the quotes that have been criticized were taken out of context. Knezovich agrees, insisting in 30 years, he's never been taught to be a warrior.

"Our job is to keep the people safe and keep the peace," Knezovich says. "Context means everything. ... It's hard to have that conversation rationally with people that just want snippet soundbites."

To quash community concerns, Knezovich says he plans to host Grossman for a public event so people can learn more about his style of teaching before any deputies would attend the two-day training.

"I believe that every individual has the right to stand and face their accusers," Knezovich says. "He's about teaching people how not to be violent. And for law enforcement officers, he teaches officers how to survive the bad day you have to use deadly force."


KILLING, PROTECTING
A series of police killings of black, Native American and other minority Americans over the last decade have reignited anger over the disproportionate use of force against people of color, and the militarization of police departments.

Most recently, the protests erupted after George Floyd, a black man, was killed when white officer Derek Chauvin knelt on his neck for nearly 9 minutes during an arrest. Minneapolis, the city where Floyd was killed, had banned "fear-based" training last spring, including Grossman's.

Grossman insists he reminds officers of their duty to protect.

Grossman says many of the ideas that people have taken issue with were out of context. For example, continue listening to the 2012 training when he says officers are at war, and Grossman goes on to say that officers should look to protective warrior role models of the past like knights, but role models shouldn't look like Dirty Harry.

"If your model is the law enforcement officer who breaks the law, who goes over the top, you're setting yourself up for some serious problems," Grossman says in the training audio on YouTube. "The best way to get yourself a serious dose of post-traumatic stress disorder is to commit an atrocity or a criminal act. The goal is to have role models who stay within the rules."

But other problematic sentiments from his training have stirred concerns locally.

One controversial clip shows Grossman saying that for those who've trained properly, "killing is just not that big of a deal." He says his training is meant to help officers avoid psychological harm from traumatic situations they face.

"I talk about that just the flat out data tells us that killing's not that big a deal. Now, moral injury, unlawful killing, is huge," Grossman tells the Inlander. "What is eating people alive is survivor guilt, and we can wrap our mind around that, prepare for that, and put it in perspective."


COMMUNITY CONCERNS
"I'm trying to find a correlation between them saying, 'We don't train them to kill,' and then at the same time, 'We have to train people in order to be able to kill,'" says Deekon Jones, who helped start a petition on OrganizeFor to cancel the training.

The petition has since gathered almost 2,500 signatures.

Training officers that killing isn't a big deal to avoid PTSD seems backwards to Jones, who works in substance use treatment for juveniles. He'd advocate instead that mental health treatment be provided on an ongoing basis for officers, not just after deadly or serious incidents.

"I've been a part of the discussion of mental health in the black community and specifically black men who are afraid to seek mental health because of the stigma," Jones says. "Neither of us are getting mental health. I see a bridge to be built there."

Attorney Biviano was in the courtroom when Spokane Police officers saluted disgraced colleague Karl Thompson, who'd been sentenced to prison for the wrongful death of Otto Zehm, a white developmentally disabled man who died after officers struck him with a baton and hog-tied him.

"The at-war mentality is completely contrary to what many, I'd say most of us, want in our law enforcement," says Biviano, whose Facebook post calling out Grossman's training garnered attention before the petitions.

Biviano was previously a mental health case manager, and says he knows that when a person in crisis is lashing out, you can often de-escalate the situation without violence.

"I was asked to deal with the same types of people, who may be acting out, may be threatening, and we would address and stop it, but in a way that reduces harm," Biviano says. "I had a teenage boy come at me with a bat, but I let him go after my car instead of confronting him, because he was acting out in a place of crisis, and the last thing he needed was to be physically restrained by me."

Other community leaders have raised concerns about a scene in the 2016 documentary on police militarization Do Not Resist, when Grossman is seen telling a crowd that sometimes after an officer gets home safe after a deadly shooting, they have great sex.

"They all say, 'The best sex I've had in months,'" Grossman says in the documentary. "Both partners are very invested in some intense sex. There's not a whole lot of perks that come with this job. You find one, relax and enjoy it."

Grossman claims the quote was cut up and out of the broader context of a discussion on the psychology of killing. He says he teaches people that after a traumatic incident, there's a parasympathetic nervous system backlash that often sees people binge on food and sex.

"It scares people. Is it an affirmation of life in the face of death? Is there a hormonal surge? I believe it's both," Grossman says.

Still, Knezovich insists that he and Grossman share a belief that officers who overstep the bounds of their duties as peacekeepers should be fired, and it should be easier to prevent them from getting reinstated.

"The takeaway for me was, with carrying that gun comes great responsibility," Knezovich says. "You need to make sure you're holding yourself to the highest standards, and if you have to use force, you had better be doing it justifiably and correctly. That was the bottom line message." ♦

The original print version of this article was headlined "Warrior Cops"