Basically, Empire Health Foundation is trying to make everything better

With the sale of Deaconess and Valley hospitals

to Tennessee-based Community Health Systems in 2008, a nonprofit was spun off: Empire Health Foundation. The goal? Nothing less than to "transform our seven counties into the state's healthiest region."

Nearly seven years later, Empire Health Foundation's presence seems to be everywhere: In reforming foster care, in the debates over a medical school in Spokane, in the search for healthier school lunches, in efforts to improve high school graduation rates, and in mental health programs and helping people in rural areas cope with aging.

"And we try to move the needle in each of those," says Antony Chiang, the foundation's president.

As the region's largest health care foundation, with $165 million in assets, Empire has purposefully embraced the broadest definition of wellness. The notion is that health is affected not just by diet and exercise, but by environment, education and traumatic experiences.

As Chiang walks through the foundation's new office space, in the old Chamber of Commerce building nestled between the Spokane Club and the former Masonic Temple, he points out recent renovations. From a chopped-up and dated interior, the remodel has created a modern, brightly lit, open-concept layout. On the floor below, the foundation is in the process of creating a high-tech teleconferencing room, making it easier to hold meetings with far-flung board members or partners. "We just need to get all the AV equipment in there," says board chair Sue Lani Madsen.

Not every office in the building is for the current 15 or so employees, though. The building will also serve as an incubator for health-focused nonprofit startups, eventually bringing in about 30 additional employees. 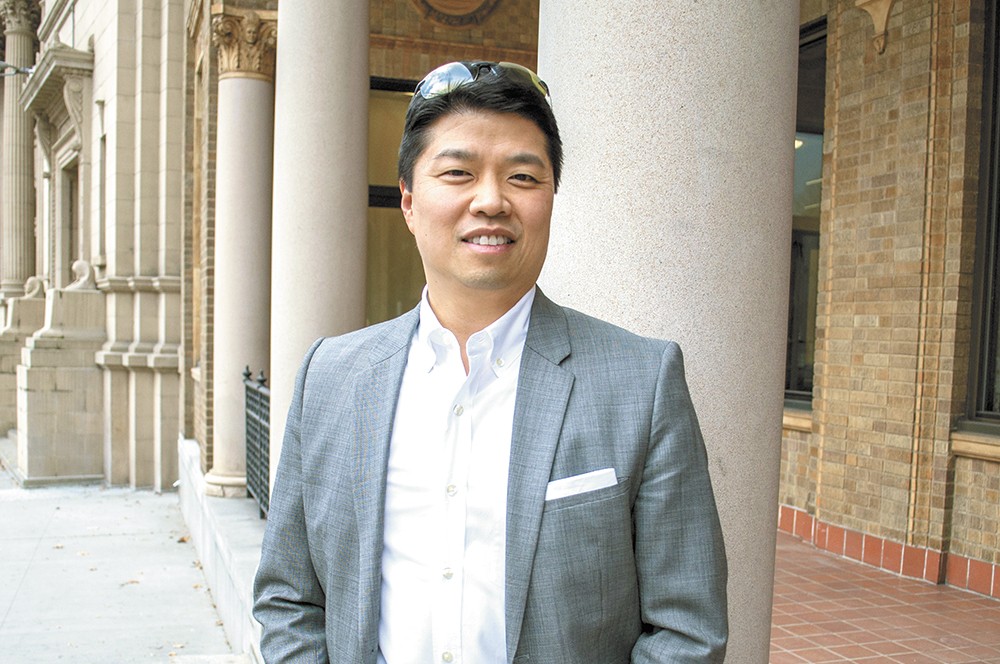 "They're all related to our health strategies," Chiang says. One startup already in place, the Family Impact Network, focuses on the foster care system, helping Washington state measure the performance of child welfare contractors. Another, Better Health Together, guides local uninsured people through the sometimes-complicated health care exchanges created by the Affordable Care Act.

"We are very conscious that we must not, and cannot, be partisan," Chiang says. In an era where health care is inextricably mixed with politics, avoiding politics can be tricky.

"I actually think the conflict and competition is good for the region," Chiang says. Now that WSU and the University of Washington are locked in an argument over the best way to provide medical education in Spokane, a four-year med school looks all the more likely.

Chiang says the foundation's projects are all evaluated as objectively as possible, and they look for measurable results almost immediately. The "Year in Review" is crammed with bar charts detailing outcomes: A big drop in uninsured residents in the county. The leap in scratch-cooked meals at area school districts. The decline in out-of-school suspensions at high schools.

That's not to say that every endeavor has met with success. A $4 million grant from an anonymous Midwest private foundation to address problems of "rural aging" was partly directed to a hospital district in Pullman, in an attempt to prevent hospital readmissions by improving the discharge process. "I had an idea for using telemonitoring for someone who is discharging to home, to be able to check in with a doctor," says Madsen. Otherwise, patients could face an hourlong drive just to see a doctor. Nearly a year into the trial, though, Chiang admits, "we haven't moved any key needles for seniors."

In other cases, the improvement is clear. "If you look at the main reason why folks who are uninsured end up in the emergency room, it's oral pain," says Chiang. To address this, Better Health Together has started referring emergency room patients with oral pain to dental experts. They're able to treat them, and often get at the underlying oral health issues.

"Initial results? We're going to save three times the ER costs to create that referral program. That's a win-win-win, right?" Patients pay less, get better care, and the cost of health care decreases. And the entire region, thanks to Empire Health, gets a little healthier. ♦

Rebooting school lunch into something more nutritious and palatable has been the vision of celebrity chefs like Jamie Oliver. The idea hasn't always been greeted with enthusiasm, though. "Thank you for trying to make my school lunch better, but you have ruined Taco Tuesday," a second-grader from LaPlace, Louisiana, wrote to First Lady Michelle Obama.

How do you switch something easy and relatively appealing, like French fries, to something healthy? How, literally, do you make kids eat their broccoli?

In the past four years, Empire Health Foundation has partnered with the kitchen staff from 10 school districts to serve more than 1.6 million meals a year, every one of them made from scratch. "Every summer before a new school district starts, they go to a culinary boot camp [to learn how to make big homemade food]" says Antony Chiang, the foundation's president. "From chicken nuggets to herb-baked chicken, essentially."

Done right, cooking from scratch can actually save money for schools.

"It's the same number of people who actually are using their time to prepare the meals-from-scratch food," Chiang says, although their activity is different during the day.

Now the region's biggest district will join in the program. Mark Oswalt, a nutrition services supervisor at Spokane Public Schools, is overseeing the district's scratch-cooking program. Instead of frozen pizza trucked in from the East Coast, for example, school cooks will make pizza from scratch using local ingredients. Oswalt admits there are challenges.

"Every district has seen a drop in participation when they implement scratch cooking," Oswalt says. "To get the students excited this spring, we're going to be doing taste tests." Cafeteria chefs are being cautious and selective, choosing items they feel kids are most likely to enjoy and preparing a couple of options for entrées each day.

Already, in the first four districts where cafeterias have converted to scratch cooking, Empire Health data shows a decline in obesity rates. Not only that, but job satisfaction has improved for the cooks.

"Imagine, for decades you're just warming up a chicken nugget, and giving that to children," Chiang says. "Now, when you serve that child, in that line, that's food you cooked."