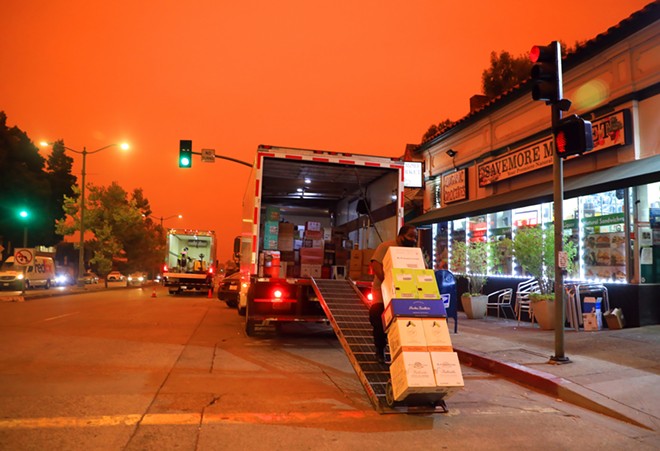 A fast-moving wildfire in Northern California exploded overnight, growing by nearly a quarter-million acres, forcing thousands of people to flee their homes.

As bad as that was, fires appeared even more destructive in Oregon, where officials said a wildfire driven by 45 mph wind gusts tore through two towns, destroying more than 1,000 homes and raising fears that some people had not been able to escape.

In one town, Phoenix, Mayor Chris Lux estimated that 1,000 homes may have been lost. In nearby Talent, hundreds more homes were incinerated.

The out-of-control fires added to the crisis that has been unfolding across the West this week, as an extraordinary number of blazes, driven by high winds and fueled by recent heat waves, raged in California, Washington, Oregon and Colorado.

California’s wildfire season is already the most severe in modern history, measured by acres burned. On Tuesday night and into Wednesday morning, the Bear Fire, part of the North Complex Fire, grew at an astonishing rate of 1,000 acres every half-hour as it bore down on communities surrounding Oroville.

Local authorities ordered urgent middle-of-the-night evacuations around Lake Oroville, and the Red Cross set up temporary shelters in several communities. As shaken residents worried Wednesday about whether they would have homes to return to, authorities said they were assessing damage and trying to determine how many structures had burned and whether anyone had been hurt or died.

More than 2.5 million acres of land have burned in California this year — nearly 20 times what had burned at this time last year — and there have been 2,650 more fires than at this point in 2019.

In Washington state, Gov. Jay Inslee said the 330,000 acres that had burned across the state were more than what burned in each of the last 12 fire seasons. Nearly all of the homes and municipal buildings in the small town of Malden were burned to the ground.

Gusts could reach higher than 50 mph in Southern California, and although the worst of the winds in Oregon has passed, forecasters with the National Weather Service’s Portland office warned that “there is still plenty of wind to come.” To the north, much of the western part of Washington state was under a red flag warning Wednesday — meaning there are “hot, dry and unstable” fire conditions.