Will the so-called Father of Spokane be scrubbed from a neighborhood park? 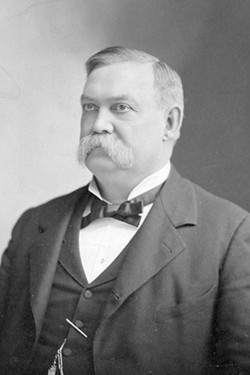 FROM FOUNDER TO FISH

Back in 2014, Spokane city founder JAMES GLOVER'S controversial past resulted in his name being rejected as the title for a new city plaza. Now, the same thing's likely to happen to a historical park bearing Glover's name.

The recommendation will be sent to the Spokane Park Board for final approval.

James Glover, the first white settler in the Spokane area, was perhaps the most important person responsible for founding Spokane. He had a reputation for generosity. But he also had considerable ugly pieces in his legacy. Several years after Glover divorced his wife, calling her "wholly impotent, barren and incapable of reproduction," he committed her to an insane asylum.

"He divorced his wife; she's buried out at Eastern State Hospital in an unmarked grave," Stuckart said in 2014. "Is that somebody we want to honor as a city?"

The renaming proposal was sparked by comments from Spokane Indians Senior Vice President Otto Klein, David Browneagle of the Spokane Tribe, and several parks department employees as the field was being restored last fall.

Bill Forman, Peaceful Valley Neighborhood Council president, says his support for the renaming was less about the controversy surrounding Glover and more about celebrating the redband trout that spawn nearby.

"It's a cool idea to recognize the fish that spawn adjacent to that park," Forman says. "I like the whole natural history idea... 'Glover Field' didn't really appeal to me."