Will they never learn? Humans return to the dino island in Jurassic World: Fallen Kingdom 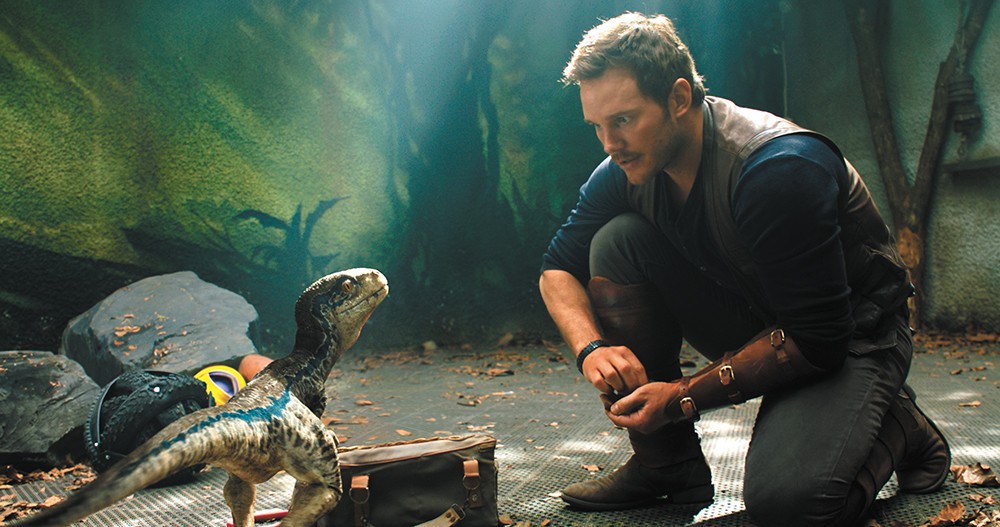 Hold on to your butts: The newest Jurassic World has a whole lot of incident, but very little substance.

Hollywood finds a way. Hollywood always finds a way... To keep telling the same stories over and over again, that is.

If you've seen The Lost World: Jurassic Park — the 1997 sequel to 1993's Jurassic Park — then you've pretty much seen Jurassic World: Fallen Kingdom, the sequel to 2015's reboot of the franchise. (One suspects Fallen Kingdom came about as a subtitle for the film by running "Lost World" through a thesaurus.) Once again, what was intended as an open-to-the-public theme park is now closed after a dinos-chomp-humans disaster, and for seconds, let's invent a reason to get a few people back there anyway.

And it's the same reason as Lost World: Some rich assholes want to remove the abandoned dinosaurs and bring them back to the mainland.

There's more urgency to Fallen Kingdom's conceit than there was to Lost World's: Isla Nublar's dormant volcano has come alive, and a massive, island-devastating eruption is coming, which will wipe out all the animals. Former Jurassic World administrator Claire Dearing (Bryce Dallas Howard) and raptor wrangler Owen Grady (Chris Pratt) are among the team that returns to the island, financed by too-wealthy-for-anyone's-good Benjamin Lockwood (James Cromwell). They need Claire to activate the park security systems that will let them track the dinosaurs, and they need Owen because they desperately want to capture Blue, the smart, social raptor who Owen had trained to obey commands.

You will be unsurprised to hear that the rescue does not go well, and that Lockwood's people are driven by secret and less than ecologically noble motives.

Fallen Kingdom may feel inexcusably familiar, but it's very slightly an all-around better movie than the first Jurassic World. The sequence in which the volcano finally goes kerflooey — and the panic that sets off among the humans and the dinosaurs to escape it — is deliciously intense. (See this in IMAX if you plan to see it at all.) Director J.A. Bayona (The Orphanage, A Monster Calls) manages to bring a tiny bit of the spirit of Spielberg in this section of the film, in the pathos of terrified dinosaurs caught up in the eruption, and particularly as Claire and Owen, presumed dead in the cataclysm, surreptitiously witness Lockwood's nefarious forces loading up their dino catch onto a freighter. This recalls bits of Raiders of the Lost Ark not just visually but also emotionally, as Claire and Owen resolve to stop bad guys who have precisely the opposite of the entire planet's (never mind the dinos') best interests.

That said, the promise that this movie was sold on — the dinosaurs are free and rambling everywhere, no longer constrained on a remote island — is but one of the ideas that Kingdom doesn't have a lot of interest in exploring. It's clearly keeping this one in reserve for the next film (currently due in 2021), but the other few intriguing ideas new to this rebooted franchise are cast aside in favor of dino action (of which there isn't even enough anyway). Debates about what bits of nature are worth saving could be the source of an entire film on its own — Claire was called away from her work with the activist "Dinosaur Protection Group" — but that's left by the wayside. The warning that ridiculously rich men ruin everything deserves more exploration. Newly more overt Frankensteinian allusions could have done with more examination.

There's too much going on in Fallen Kingdom, and yet somehow not enough, either. The fact that the original Jurassic Park Cassandra, Ian Malcolm (Jeff Goldblum), is here relegated to two tiny scenes — just about all of which you've seen in the trailers and ads — is an unintended microcosm of the biggest problems with Fallen Kingdom on the whole.

At least the movie is far more fair to the female characters than Jurassic World was: Bayona makes a big deal out of showing us that Claire is wearing sensible boots this time, rather than the stiletto heels she foolishly ran around Isla Nublar in last time. And awesome "paleo-veterinarian" Zia Rodriguez (Daniella Pineda), who is on the trip to Isla Nublar, and badass little girl Maisie Lockwood (newcomer Isabella Sermon) — Benjamin's granddaughter — are terrific characters, and more interesting, in fact, than either Claire or Owen.

Nothing can ever compare with the wonder and horror of the first Jurassic Park. And yet: dinosaurs! I wish this was a better movie, but I'll take the dinosaurs.

The original print version of this article was headlined "Fossil Fools"

Jurassic World: Fallen Kingdom is not showing in any theaters in the area.