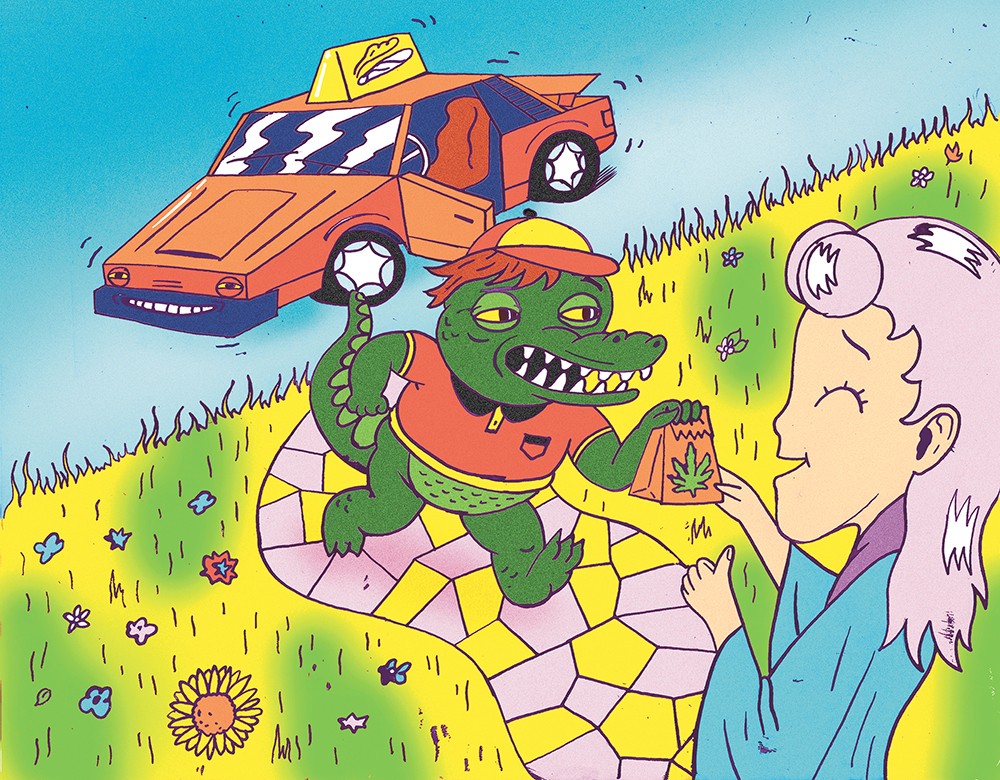 You settle in after a hard day's work.

Or maybe you're just waking up — whatever you do.

You pull out the rolling papers (or vaporizer or bowl or bong, or whatever your prefered marijuana delivery method), then reach for the weed:

Barely enough to fill a one-hitter, and the shops have already locked up for the night.

If only there were a number you could call, some kind of service that would ferry a frosty nug right to your door. An UberEATS, but for weed.

"I think there is a possibility for it," says Kevin Oliver, executive director of the Washington chapter of NORML, the National Organization for the Reform of Marijuana Laws. "There's been a lot of talk about it. Other states have included delivery in their rules and regulations."

But unlike Oregon, which has built a marijuana delivery system into its laws, such an obvious entrepreneurial venture is illegal in Washington state.

"It would take a legislative change," says Mikhail Carpenter, spokesman for the Washington State Liquor and Cannabis Board. Currently, any enforcement of illegal delivery services falls to the discretion of local law enforcement, not the WSLCB, he says.

State lawmakers did consider creating a legal pot delivery system this year. Under the proposed law, a trained delivery person could sling bags right to your house (or hotel, hostel, boarding house, resort or trailer).

Those in favor of the bill cited concerns that people delivering weed illegally (mostly in Seattle) were not checking identification, some carried more than a pound of weed with them at one time and often sold other illicit drugs, according to a summary of the proposed bill, which never made it out of committee.

Still, that hasn't stopped what appears to be a thriving cannabis delivery market on the Westside. A quick Yelp or Craigslist search for "marijuana delivery" in Seattle yields plenty of results. And in 2016, the Seattle Police Department arrested eight weed delivery people in sting operations, sparking a debate about how exactly to handle the accused runners.

The police demanded felony charges, the Seattle Times reports, in an attempt to send a message that black market weed sales would not be tolerated.

But King County Prosecutor Dan Satterberg declined to prosecute the cases, saying that harsh felony charges were "unwarranted, disproportionate to the harm caused, and would have little or no impact on the larger delivery business in Washington."

"There's so much other stuff going on with our drug investigations. We've seen the volume of meth and heroin skyrocket," says Spokane Police Capt. Brad Arleth. "It's a matter of capacity, and what really serves the community as far as the use and expenditure of our time and resources."

Arleth suspects that if illegal weed delivery networks were operating in Spokane, the shops would likely say something.

"They generally want to have a good relationship with law enforcement because they're running a legitimate business," he says.

Aside from outside delivery services, Spokane attorney Frank Cikutovich, who frequently handles marijuana-related cases, says the marijuana black market in Eastern Washington is alive and well. He points to three major recent busts, including one in Adams County where police seized about 2,000 pounds in plants and processed marijuana.

"I used to see it coming from Canada or Mexico, but now they're setting up grows here," Cikutovich says. "I haven't seen that before." ♦

A version of this article first appeared in the Inlander's cannabis-centric magazine, GZQ.

The original print version of this article was headlined "On Demand"