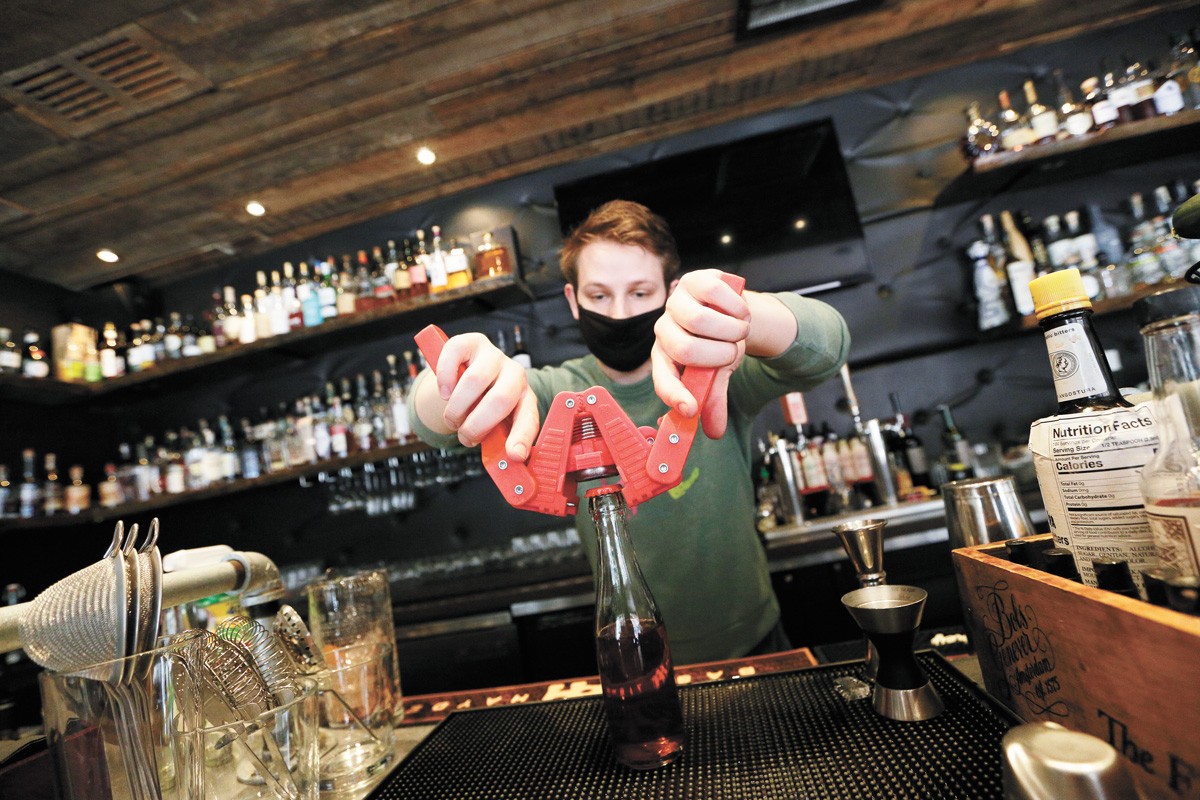 If there was a silver lining for bars and restaurants during the past year it was this: While the pandemic caused massive restrictions to be imposed on the hospitality industry, the kind that bankrupted a lot of businesses, it also caused a few more-minor restrictions to be loosened.

Take the Volstead Act, for example, a local bar named after the law that banned alcohol. After COVID-19 hit, that name became more literal than planned.

While the Volstead Act could sell food to go, their signature cocktails had been ruled effectively illegal. Existing liquor regulations in Washington state were a little old fashioned: You could buy sealed liquor bottles, but not purchase cocktails for takeout.

And at a point when restaurants could only sell takeout, that meant that a major source of revenue for restaurants was taken off the table. But last May, after being petitioned by the hospitality industry in cities like Spokane, the Washington State Liquor and Cannabis Board granted bars and restaurants a small mercy.

"Instead of offering them dessert or coffee, we can now offer them cocktails to go," says Matthew Goodwin, owner of the Volstead Act. "Is it a game changer? No. Is it a huge boost to the bottom line? No. But the restaurant industry works on a really small margin, and alcohol is one of our best margin products. So it definitely helps make a little more money."

But now that the pandemic is — slowly — coming to an end, it's raised a big question: Was there actually a good reason for those regulations? Did it ever make sense to let somebody buy a bottle of vodka at a grocery store but ban them from buying a sealed Manhattan from a local bar?

Maybe not, thought Rep. Shelley Kloba, D-Kirkland. She sponsored a bill that passed the Legislature this session extending the ability for Washington state bars and restaurants to sell cocktails to go for two years. She says that some legislators were wary of eliminating the regulation entirely, reasoning that there had to be some reason why that rule existed.

"What is it that we're missing?" Kloba said. "Is there something we were trying to protect against, by having that in place?"

So in the next two years, the liquor control board will be studying the issue, trying to understand if it, say, increased drunken-driving deaths or underage drinking. Kloba is skeptical it will.

"I don't think that this changes much about drunk driving," she says. "[But] I want to have some evidence of that."

Kloba says the Legislature also eliminated next year's liquor's license fee and gave a 50 percent discount for a year after that, an attempt to give bars and restaurants "a longer ramp to get back into the swing of things."

In other cases, the help came from local governments like Spokane that tried to speed up the permitting process for parklets and streeteries to pave the way for more outdoor dining. City Councilwoman Lori Kinnear says she expects that faster process to stick around.

She also says that she contacted the liquor control board last year to see if they would help to make things more efficient. They not only helped with permitting, Kinnear says, they said that they would relax some of the regulations around serving alcohol outdoors, like the rules around fencing or how far away you're allowed to serve alcohol from the entrance.

"As it turned out, some of the restaurants said it's really not increasing our bottom line, because we have to hire more staff to serve outdoors," Kinnear says.

Still, the flexibility highlights why some restaurant owners feel that the liquor board, typically the body that dings and punishes bars for mistakes, has actually been pretty cool during the pandemic.

"They've been working with us to get through this as opposed to coming down with an iron fist or coming down hard on us," Goodwin says. "I'm genuinely surprised and impressed with how great they've handled this." ♦

The original print version of this article was headlined "Loosening Inhibitions"