Winding down a career as a homebuilder, Greenstone's founder has an affordable housing to-do list for his hometown 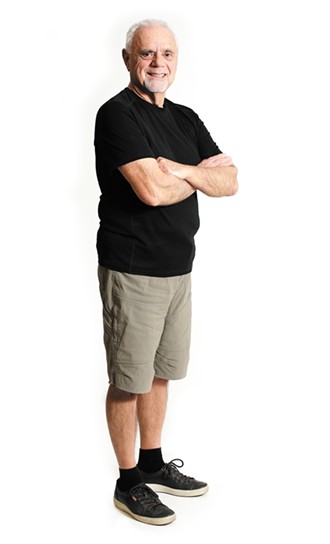 Jim Frank's a Spokanite through and through — Garfield Elementary, Gonzaga Prep, Gonzaga University School of Engineering and Gonzaga Law School. He started his career as an air quality engineer for Spokane County; after earning a law degree via night school, he went into private practice, representing both developers and neighborhoods. In 1983, Frank founded Greenstone Homes; since then, his firm has built homes all over the Inland Northwest, most recently in Kendall Yards.

INLANDER: You say you're "pretty much" retired. What does that mean?

FRANK: I go into work every day and pretend to be working, but day-to-day operations have been turned over to my son Joe [since 2014], who is doing a really good job. Joe shares a lot of the values I've had, and the company is being run by a new group of young people. I've learned that there's a point where you can't have one foot in the canoe and one out. You have to make a clean break and let the young people make the decisions.

Not long ago, we were writing stories about suburban sprawl and McMansions; now we're writing about how everybody wants to move closer to the action. What happened?

Markets are always evolving, and lots of empty-nesters want to be close to urban amenities. Younger professionals... that generation has deferred setting up a household to maybe a decade later. Before they start a family, they like to live in neighborhoods where there's a sense of gathering. Single women also feel safer in a more urban environment, and are looking for the very same thing as empty-nesters. Those groups are making infill development happen.

We all see the headlines about how crazy expensive housing has become in Seattle. We're a little smug about how affordable our housing is. Should we be?

We can't be smug, no. This is a nationwide issue: We simply aren't building enough houses to accommodate our population. That's why we're seeing unsustainable prices in both homes and apartments. Median house prices are $800,000 in Seattle, and that makes it impossible for a middle-class family to live there. It's causing a lot of people to leave for Spokane. And that puts pressure on our housing market. The question is, do we have enough inventory?

The urban growth boundary is very tight, and the city of Spokane has been very slow to make changes to allow urban housing and infill to occur. So a lot of the housing for the Spokane market is happening on the Rathdrum Prairie in Idaho. Are we pushing our middle-class to migrate to North Idaho? In a generation, I think we'll see that will have consequences.

There needs to be revisions to the [state] Condominium Act. Condos have long been the entry to home ownership, but we haven't built any really since 2009 when the act was revised.

Most opportunities for urban infill are in the city of Spokane. Our Comprehensive Plan is fine, but we have been slow to make the changes in the development code to implement it. Take accessory dwelling units — it's pretty restrictive here. But if you go to Vancouver, B.C., there's an entire industry doing granny flats.

You can't just allow something. Your development code needs to encourage it. Those are two different things.

Right now, they're updating the downtown comp plan, and housing needs to be the focus. We've not followed the recent trend of most major cities that have had significant downtown housing development. We need to understand why. If we don't get more housing downtown, it's nothing more than a drive-to employment center. It's not a mixed-use downtown if it doesn't have housing. And we don't need 50 units; we need 5,000 units. ♦