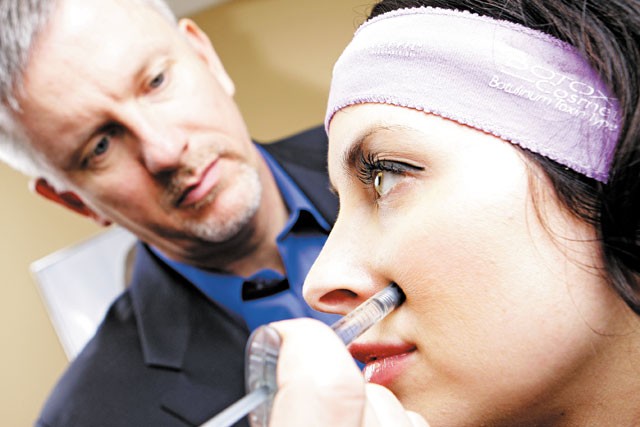 When the FDA approved Botox for cosmetic use in 2002, beauty industry spokespeople proclaimed it the “Year of the Botox Party!” So why has it taken until 2009 to get formal invitations to Botox parties here in the Inland Northwest? Some in the business blame the area’s general resistance to national trends, but that’s changing fast. Nearly 200 clients — about 95 percent of them women — now get regular Botox injections at Spokane’s Inland Aesthetics Institute. And for many, there’s nothing wrong with incorporating a little fun into the experience.

Registered nurse Lynette Smith offers “Botox Parties” to small groups at Face Techniques, her Coeur d’Alene medical spa. Similar to those offered by Inland Aesthetics, the parties feature appetizers, wine and the lively conversation we expect at a social gathering, as well as sterile needles, local anesthetic and the expertise we want from someone injecting muscle-paralyzing toxins into our faces.

Although most women pay $250 to $400 for the first Botox injection, there are discounts for customers who come to parties. Smith estimates it breaks down to about $75 a month to keep wrinkles at bay. Both she and B.J. Frey, an ARNP at Inland Aesthetics, say they only offer parties at their clinics because it’s professional, and their liability insurance wouldn’t cover anything that might “go wrong” at a home party.  Frey warns potential Botox or Dysport (a new competitor of Botox) customers to be very careful choosing with whom they RSVP.

“I would ask them how long they’ve been doing the injections, and either how many injections they do in one week, or how many vials they open per week,” suggests Frey. She explains that using a larger, already open vial for several weeks can compromise the sterility and effectiveness of Botox.

Injections should require a prescription from a doctor or ARNP, and trusting your face to an untrained injector is a big mistake. The “units” used to measure Botox are extremely concentrated, and too large a dose can spread to an unintended muscle group. This is how a simple furrowed brow correction can lead to droopy eyes.

But in an organized professional setting, “Botox parties are a great idea … because being in a group is a different experience,” says Smith. “There’s safety in numbers … Women who’ve already had some curiosity but were feeling timid … can make the decision to take the step together.”

“The wine helps, too,” says “Emily,” who’s been to two Botox parties. “As spa services go, massages and facials are fun, but getting Botox isn’t fun. The wine makes it a little less painful, and having your girlfriends in there with you smiling just makes it like a cocktail party.”

When people tell Emily, “You look rested,” or ask, “What makeup are you using? What’s different?” she doesn’t lie. “I tell people it’s Botox,” says Emily. But ’fessing up to a friend is different than sharing with magazine readers, so Emily chooses not to reveal her name.

“I guess it’s viewed as a step below plastic surgery, or an extravagance, and you seem overly vain. I have friends who even hide it from their husbands,” she says.

“Women feel good, but they don’t want to say, ‘I had all these things done to my face,’” explains Frey. “We really try to make people remain themselves, with a little more. You want to look good effortlessly.”

Frey says she will never get tired of experiencing the happiness women feel at seeing their “after” pictures.

“I used to work for a neurosurgeon, and I saw patients in the office for three years,” she explains. “It was just sad. Patients were often comatose, paralyzed or in a lot of pain because of traumatic injury. In cosmetics, people want to be there, and when I get to correct or straighten a smile … or brighten up someone’s eyes, it’s a work of art.”

Right now an estimated 3 million people use Botox each year. It’s a safe bet the numbers will climb as the children of the current 450 million baby boomers worldwide start to notice furrowed brows and crows’ feet.

“I like to use the analogy of cell phones,” says Smith. “In 1996, I can remember it was very rare to have the bulky brick cell phone. I thought I would never have one of those. Now we all have cell phones. I say the same thing about Botox — look at how fast it’s grown in that amount of time.”

Botox is a neurotoxin made from the “purified protein derivative” of Clostridium botulinum. The toxin blocks nerve impulses, temporarily paralyzing the muscles that cause wrinkles. Although the before and after photos are incredibly compelling, many people are put off by the words  “toxin” and “needle.”

In fact, only about 3 million of the 91 million U.S. consumers who tried anti-aging products last year actually got Botox injections. Most of us are searching for less invasive or cheaper regimens like these.

• The Website www.skincareresourcecenter.com offers some of the most popular anti-aging products including Chanel’s line correcting, lifting and firming gels from $85-$165.