Dancing, singing and spectacle help White Christmas achieve escapism velocity. What about the parts that don't? 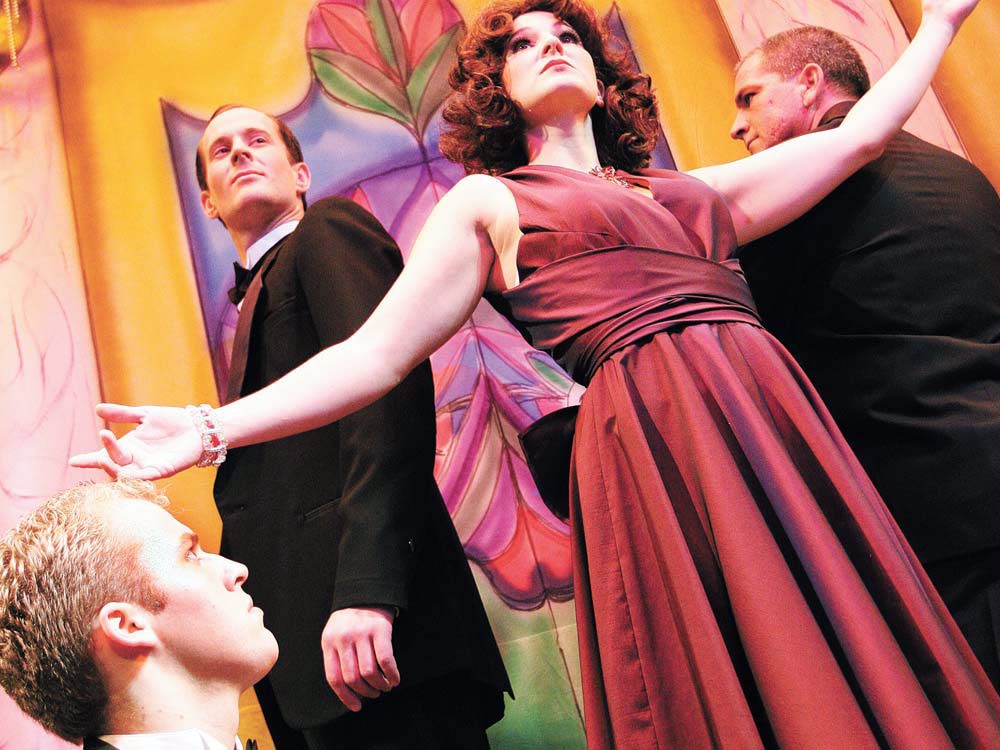 Young Kwak
Andrea Dawson is through with romance - for now.

Times are tough. You want the holidays to be festive. You want a little escapism. The Civic’s White Christmas offers escape, all right: tap-dance storms and Fred-and-Ginger waltzing. A torch song that transforms into a lovely duet. The leading ladies parade around in a two-woman fashion show of one elegant ‘50s gown after another. Amid a multiplicity of well-designed sets, there’s one scenic effect toward the end that will take your breath away. And yes, the title song moves from a cappella to sing-along in warm, fuzzy and comforting ways.

The muscles and tendons of this production — acting, dancing, singing, design elements — then, are quite strong. It’s the show’s skeleton, however — its plot, characterization and dialogue —has a bad case of osteoporosis.

At one point, an angry outburst — “That’s nothing but a load of guff!” — provides a good plot summary, actually. And it turns out that White Christmas doesn’t have much at all to do with Christmas: The famous song is just used as a framing device. It’s mostly let’s-put-on-a-show sprinkled with the usual boy-gets-girl, loses-girl, gets-girl-again action.

“Oh, that’s just old-fashioned escapism,” people will say. What’s wrong with that? Why not just enjoy it? And over the next several weekends, thousands will — because this month-long show is already sold out.

But escapism doesn’t work if half the time (nine out of 16 different songs, by my count), the corny-hokey-schmaltz factor has you eyeing your wristwatch instead of watching what’s onstage.

For example, the two numbers that are supposed to establish the boys and girls as accomplished performers — “Happy Holidays” and “Sisters” — come off as vaudeville-cutesy, with the boys in Santa costumes and the girls playing peek-a-boo with giant blue feathers.

Partridge is no Bing Crosby, but he’s better looking and better at delivering dry witticisms. And he may not have The Voice, but then, who does? When Dawson delivers the second-act torch song, “Love, You Didn’t Do Right by Me” — and when Partridge and his tuxedo step into the spotlight for “How Deep Is the Ocean” — his love-longing answers her love-disappointment. It’s the evening’s vocal highlight.

Most of Act Two prior to that feels like variety-show filler. They’re not in love, but they do a song and dance anyway. The boys giggle through a drag number. Then a child-actor number evokes the saccharine excesses of Shirley Temple.

Midway through the first act, though, came one of the best things about this show — called, appropriately enough, “The Best Things Happen While You’re Dancing.” The secondary couple have just fallen in love, you see, and things are bustin’ out all over. Cameron Lewis and Siri Hafso proceed to provide us with a Fred-and-Ginger moment, with the choreography of director Troy Nickerson (assisted by Jillian Wylie and Kathie Doyle-Lipe) reaching its zenith.

Lewis and Hafso waltz and shimmy arms, clap hands and kick, throw in some boogie-woogie moves, move apart and back together, floating across the stage and into each other’s arms. It’s emotive dancing as opposed to show-off dancing. Nickerson idealizes the romance with a vocal quintet and moonlit setting.

Now that’s the kind of stuff I can escape into.

In a supporting role, Doyle-Lipe is hilarious as the tough old broad who wants to get back into show biz.

It’s a lot of talent lavished on mediocre material, a lot of overproduced schmaltz with enforced pleasantness.

White Christmas • through Dec. 19 • sold out • http://www.spokanecivictheatre.com • For another version of this review, visit http://stagethrust.blogspot.com